(RNS) Hindus around the world are wondering whether Sri Srinivasan — the name atop many a list of potential U.S. Supreme Court nominees — will be the first Hindu to serve on the high court.

The India-born Srinivasan put his hand on the Hindu holy book, the Bhagavad Gita, held by his mother, when he was sworn in to the U.S. Court of Appeals for the District of Columbia Circuit in 2013. The Senate had confirmed him to the court — often a launching pad to the Supreme Court — by a 97-0 vote. 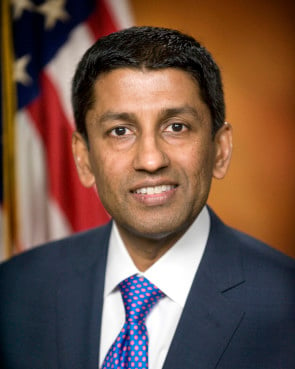 Sri Srinivasan, shown here when he was U.S. deputy solicitor general, is a judge on the influential U.S. Court of Appeals for the District of Columbia Circuit. Photo courtesy of Reuters

Now the Times of India, The Hindu and other Indian newspapers — as well as scores of American legal pundits — are speculating that Srinivasan could be Obama’s nominee to replace Justice Antonin Scalia, whose death was announced Saturday (Feb. 13).

The appeal of Srinivasan, who clerked for former Supreme Court Justice Sandra Day O’Connor and argued more than two dozen cases before the high court as a deputy solicitor general, lies in his reputation as a moderate and the ease with which the Senate confirmed him to the appeals court.

Srinivasan, 48, who immigrated to the U.S. as a child, was raised in Kansas, and graduated from Stanford University with degrees in business and law. He has a pro-business pedigree, and defended former Enron chief Jeffrey Skilling. But he has also argued for liberal causes — as deputy solicitor general he argued that the Defense of Marriage Act, which defined marriage as between one man and one woman for federal purposes, was unconstitutional.

(Lauren Markoe is a national reporter for Religion News Service)