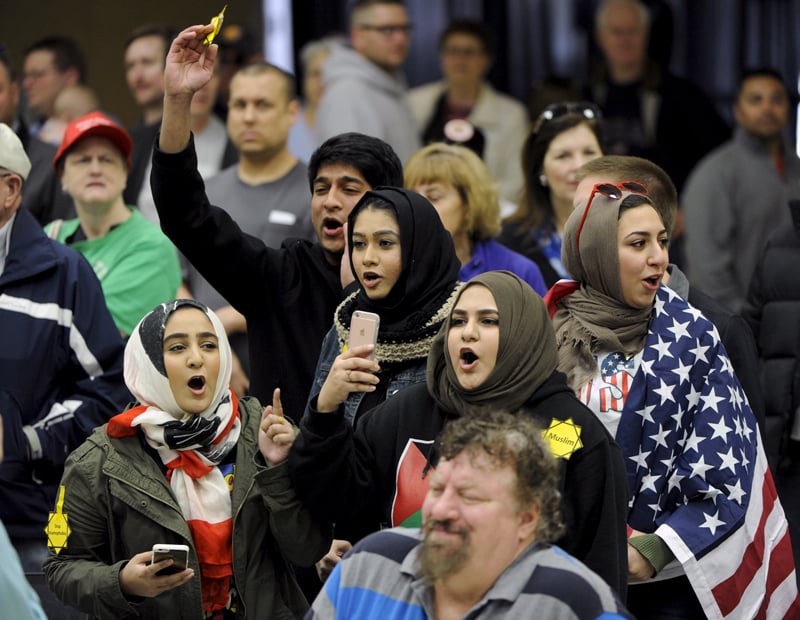 Young Muslims protest U.S. Republican presidential candidate Donald Trump before being escorted out during a campaign rally in the Kansas Republican Caucus at the Century II Convention and Entertainment Center in Wichita, Kan., on March 5, 2016. Photo courtesy of REUTERS/Dave Kaup
*Editors: This photo may only be republished with RNS-MUSLIM-SURVEY, transmitted on March 15, 2016.

(RNS) This election season, Muslims face a slate of Republican candidates who demand curbs on immigration and compete over how tough they’d be on Islamic terrorism, if elected.

But a new survey finds U.S. Muslims are looking at American society and its future much the same as their non-Muslim neighbors. Like non-Muslims, the economy is their top concern. They are engaged in community life and share similar attitudes on several significant issues.

The survey was issued Tuesday (March 15) by the Institute for Social Policy and Understanding, a nonprofit research group founded by Muslim professionals, primarily physicians and business entrepreneurs, to examine issues in the U.S. Muslim community and its relationship with the wider society.

The Muslim community is “both pious and patriotic, optimistic and weary of discrimination, similar to Jews in its politics, and much like Protestants in its religious practice,” writes Dalia Mogahed, director of research for the ISPU and author of the report.

Many groups say their top priority in the 2016 election is the economy.

It’s true for Muslims, Democrats, Jews and African-Americans. But Catholics and Protestants put it second behind national security, while Muslims list Islamophobia second and education third.

“It’s not that Muslims don’t care about the security of the country,” said Mogahed. “Their day-to-day fears are closer to home — to jobs and their families.”

Fifty percent of Jews and 44 percent of Muslims vote Democratic, the survey found.

And their presidential preferences match up similarly. Hillary Clinton leads for 40 percent of the Muslim vote, 30 percent of the Jewish vote, but only 13 percent of Protestants and Catholics. Only 4 percent of Muslims favor Donald Trump, the loudest advocate for shutting off Muslim immigration.

Muslims want to vote almost as much as their neighbors.

Eighty-five percent say they plan to vote. However, the survey found that only 60 percent of Muslims who are legally able to vote are registered to vote. “There’s a huge gap there — 25 percent,” Mogahed said. “So it’s a big opportunity but there’s a lot of work to be done.”

Muslims are the most likely faith group to say they have experienced some religious discrimination.

“Nearly 1 in 5 (18 percent) say they regularly experience this — higher than any other faith community,” Mogahed said. Five percent of Jews and less than that of Catholics and Protestants said the same.

There’s no correlation between Muslim attitudes toward violence and frequency of mosque attendance.

The report adds:  “Muslim Americans who regularly attend mosques are more likely than those who do not frequent mosques to work with their neighbors to solve community problems.”

Most Muslims (65 percent) say it’s “never justified” for the military to target and kill civilians.

This compares to 45 percent among Jews and 43 percent and 40 percent among Catholics and Protestants, respectively, the report said. About 8 in 10 in every faith group also see no justification for “targeting and killing of civilians by individuals or small groups.”

Mogahed was surprised by two findings regarding discrimination. People who said they did not experience discrimination were the most optimistic about their life in America. But they were also less likely to say they had participated in an activity to improve life in the community.

But Muslims who reported regularly facing religious discrimination were more involved in problem-solving with others in their community even though they were less upbeat.

“I would have thought they would be more isolated, less engaged,” said Mogahed. “Instead, we see less optimism but more activism.”

It’s not known from this study whether their experience is driving their activism or, because they are more active, they encounter discrimination more often.

The findings are based on interviews of 515 Muslims, 312 Jews and 1,021 people drawn from the general public.

Opinion
Prayer apps are flooding the market, but how well do they work?