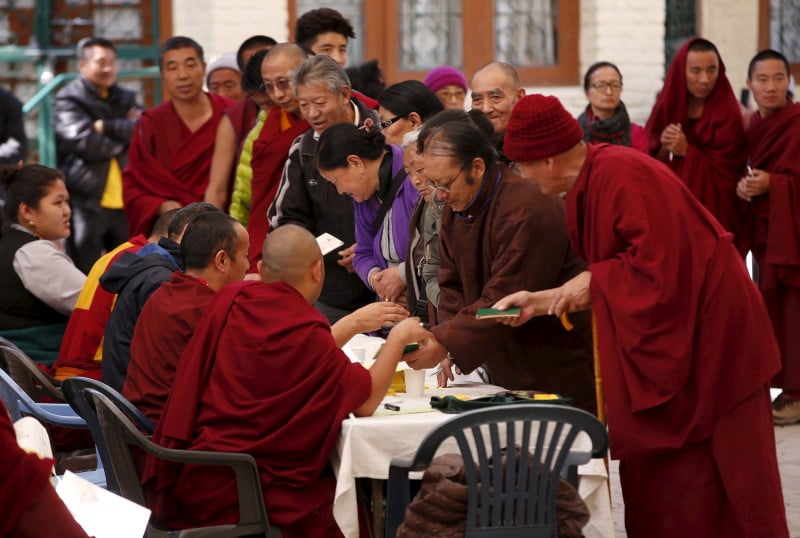 Tibetans in exile stand in queue to get their ballot paper during the election for the Tibetan government-in-exile at a polling booth in Dharamsala, India, March 20, 2016. REUTERS/Adnan Abidi.
March 20, 2016
Reuters 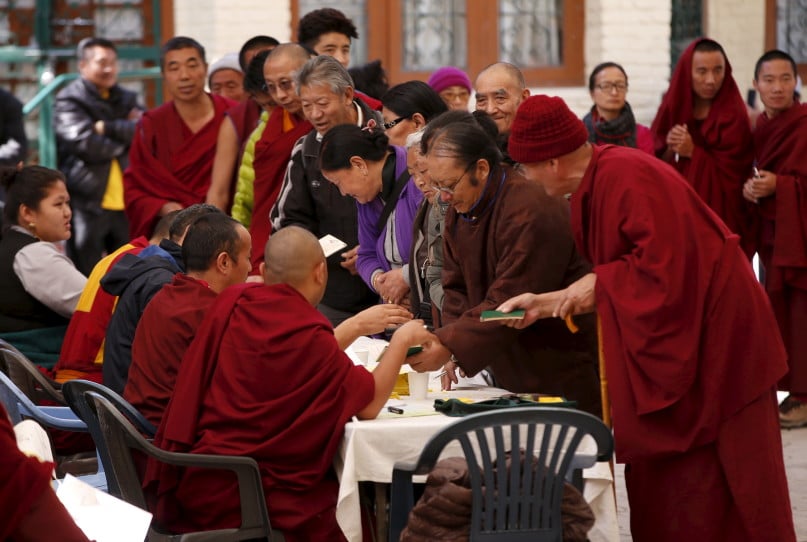 Tibetans in exile stand in queue to get their ballot paper during the election for the Tibetan government-in-exile at a polling booth in Dharamsala, India, March 20, 2016. REUTERS/Adnan Abidi.

DHARAMSALA, India -- Exiled Tibetans across India and overseas started voting on Sunday to elect a political leader for the next five years, in a bid to help sustain their struggle to secure complete autonomy for Chinese-ruled Tibet.

Thousands of monks and nuns in maroon robes, students, and men and women queued to vote outside polling booths in Dharamsala, a town in India's Himalayan foothills where a community of Tibetans live in exile with the Dalai Lama, hoping for resumption of talks with China.

The second such election follows a decision by the charismatic monk, an 80-year-old Nobel Peace Laureate, to relinquish his political authority and vest it in a democratic system that could outlast him.

China does not recognize the government that represents nearly 100,000 exiled Tibetans living in around 30 countries including India, Nepal, Canada and the United States.

Election results will be out between April 27 and 28, with more than half of the 90,377 eligible voters expected to exercise their franchise, according to the election commission.

The "Sikyong", or elected leader, will be solely responsible for political and diplomatic decisions, as the Dalai Lama steps back from the limelight amid uncertainty over how his successor will be chosen.

"With regard to dialogue with China, we have been making initiatives, efforts," Lobsang Sangay, the incumbent Sikyong, told Reuters after casting his vote. "It takes two to clap. Our side is willing and ready and as soon as the Chinese give us the positive sign, we will be ready to take it further."

Concern about the Dalai Lama's health, after his admission to a U.S. hospital this year for treatment, has reinforced the importance of the vote in keeping the issue of Tibet alive.

Tibetan Buddhism holds that the soul of a senior lama is reincarnated in the body of a child after he dies. China says it must sign off on the reincarnation of the Dalai Lama, who fled into exile in 1959 after a failed uprising.

The election will decide who leads the parliament of the Central Tibetan Administration (CTA) in Dharamsala.

Exiled Tibetans consider the CTA to be their legitimate government, but no country recognizes it. China has lobbied to sideline the Dalai Lama from the international circuit, although he did address an audience in Geneva last week despite those efforts.

"Many people like us are in exile but more important (are the issues) of the people who are inside (Tibet) and are suffering," Kelsang, a woman in her 30s who gave just one name, said after voting.

September 21, 2020
Related Posts
By Priyadarshini Sen
A Catholic priest takes on interfaith fight against COVID-19 in a sacred Hindu city
By Claire Giangravé
Global missionary efforts have taken a hit in the time of coronavirus
By Claire Giangravé
Vatican’s China deal may protect Chinese Catholics, keep Pope Francis silent
By Riyaz Wani
Kashmir's lockdown at one year: A region's alienation turns to betrayal
By Joseph D'Souza
American Christians need to reinvent their theology and practice of missions