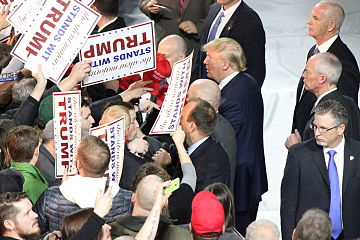 Trump with supporters in Iowa

The exit pollsters listened! In a couple of last week’s Republican primaries they included an additional religion question, and as a result we know a bit more about who’s hitting the sawdust trail to make America great again by voting for Donald Trump.

In Florida — where Trump trounced the competition — they asked about religious affiliation. So we learned not only that he did marginally better among white evangelicals (49 percent) than white non-evangelicals (46 percent) but also that he did marginally better among Catholics (50 percent) than Protestants (45 percent). Also that Ted Cruz did more than twice as well among Protestants (22 percent) as Catholics (nine percent).

In Missouri — where Trump appears to have just edged out Cruz — they asked about frequency of worship attendance. So we learned not only that white evangelicals preferred Cruz to Trump 49 percent to 38 percent but also that voters who said they attend services weekly or more voted for Cruz over Trump by 20 points (52 percent to 32 percent) and those who attend less than weekly voted for Trump over Cruz by the same margin (48 percent to 28 percent).

None of this is exactly surprising. In particular, it’s been widely suspected that the more religiously observant are less likely to vote for Trump than the less observant. But as CBN’s David Brody notes, Trump was chosen by nearly one-third of the pious Missourians who say they attend services more than once a week. What the additional religion questions do is fill out the picture of a candidate able to draw strongly across whatever demographic spectrum you care to look at at.

That’s at odds with the Beltway meme regurgitated last Friday by the New York Times‘ David Brooks. “Trump voters,” quoth Brooks, “are a coalition of the dispossessed. They have suffered lost jobs, lost wages, lost dreams. The American system is not working for them, so naturally they are looking for something else.”

This would hardly be the first time that demagogic appeal resisted easy sociological categorizing. While the Nazi Party, for example, did better among rural Protestants than urban Catholics, it drew significant support from all segments of German society in winning a 37.3 percent plurality of the vote in the 1932 Reichstag election.

Trump holds himself out to be a master of the universe beholden to no one, and that, it seems to me, is the key to his appeal. At least for Republican voters, it’s a psychodynamic factor that cuts across lines of wealth, education, ideology, and yes, religion.