ROME (RNS) Three Syrian families flown to Rome by Pope Francis are calling their trip from the battle lines of a five-year civil war to safety in the shadow of the Vatican a “miracle” journey.

The heart of Rome’s Trastevere neighborhood, with its picturesque cobbled streets and vine-covered walls, could not be farther from the asylum-seeker camp the Muslim families were living in just three days ago.

That was until the pope’s lightning trip to the Greek island of Lesbos on Saturday (April 16) that drew attention to the plight of refugees and ended with him bringing the 12 Syrians back to Rome on the papal plane.

“It was a miracle for us; he saved us. It was wonderful news; we didn’t expect it,” said Osama, a 36-year-old printer, who spoke through a translator as he and the others met with journalists on Monday (April 18). “It was a miracle for us; he saved us. It was wonderful news; we didn’t expect it,” said Osama, a 36-year-old printer, who spoke through a translator as he and the others met with journalists on April 18, 2016. Religion News Service photo by Rosie Scammell

Osama and his wife Wasa, 29 — they just used first names for security reasons — were only told on Friday that they would be leaving Lesbos with the pope a day later. Their two children, 6-year-old Masar and her brother Omar, 8, were said to be happy despite yawning and rubbing their tired eyes.

The families were selected by the Community of Sant’Egidio, a Catholic social justice group, after being identified as particularly vulnerable. Francis said on Saturday that the selection was not based on religion and those chosen had the necessary paperwork to leave Lesbos.

The 12 are among the more than 150,000 migrants and refugees who have arrived in Greece so far this year, half of which are from Syria.

Osama described a “terrible” journey to Europe from the family’s home in Damascus, the Syrian capital, ending when they were saved by the coast guard off the coast of Greece.

His story mirrors that of Ramy, 51, a teacher from Deir ez-Zor whose family was also saved while on board a boat from Turkey. 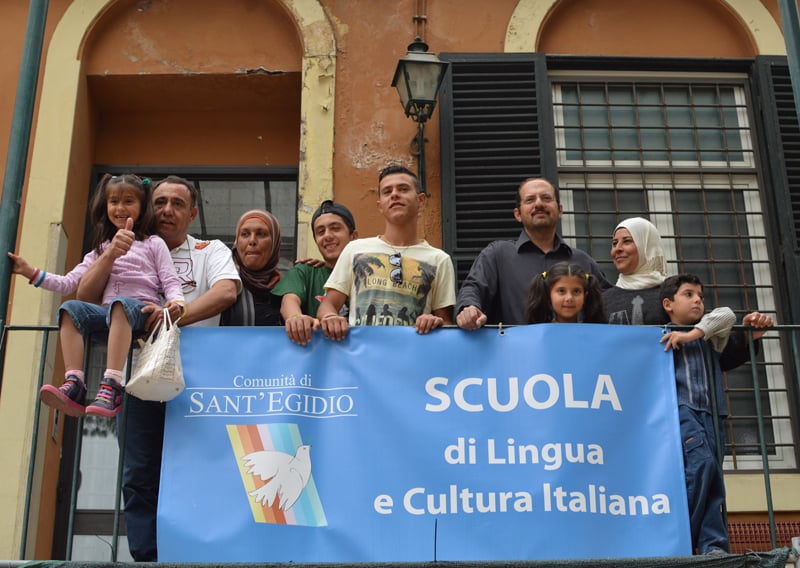 The Syrian families will be hosted by the Community of Sant’Egidio, which will also give them Italian lessons. Religion News Service photo by Rosie Scammell

“We fled because of the bombardments and the war … which has lasted many years. For that reason we thought of escaping, because we didn’t know how it would end,” Ramy said.

He and his seamstress wife Suhali, 50, have a 7-year-old girl, Al Quds, who appeared delighted with the attention the family was getting. In fleeing Syria her parents thought especially of their teenage sons, 18-year-old Rashid and 15-year-old Abdelmajid, fearing they would be forced to join the Syrian army and kill — or be killed.

While Ramy described meeting the pope as a miracle and an unbelievable moment, it was tinged with sadness for Abdelmajid. He had been forced to leave a girl he had fallen for, a 19-year-old Spanish volunteer in the Lesbos camp, and the pair broke down in tears on hearing they were to part. 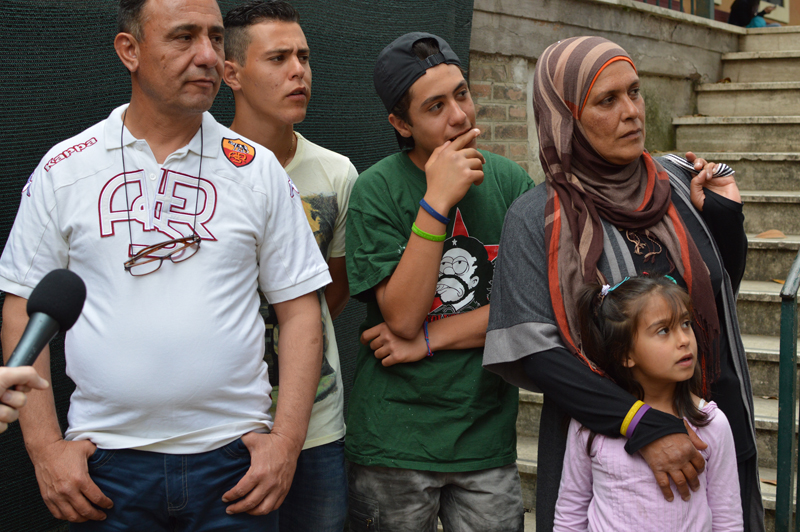 Ramy, far left, and his wife Suhila, far right, chose to leave Syria so their two sons, 18-year-old Rashid and 15-year-old Abdelmajid, left to right, would not be forced to join the army and fight in the war. Also pictured here is Al Quds, 7, far right. Religion News Service photo by Rosie Scammell

Abdelmajid’s father, however, remained focused on the future: “We want to learn the language, send the children to school, live in peace.”

The Syrian families formally sought asylum on landing in Rome and a Sant’Egidio official said the Vatican was covering the costs. Currently staying in accommodations run by the Catholic charity, they may be moved to other housing at a later stage.

The youngest Syrian to travel to Rome with the pope was 2-year-old Riyad from Damascus, who was busy playing with pebbles while his mother Nour, a 30-year-old atomic researcher, spoke to the world’s media.

His father Hasan, a garden designer, beamed at mention of the pontiff, whom the 31-year-old showered with praise: “The pope is an amazing person, an incredible person. We hope that every religious person could be like the pope.”

Last year, Francis urged each parish in Europe to take in a refugee family, and he led the way by first having the Vatican host an Eritrean and a Syrian family. The pope’s plea has been taken up by some churches, although Hasan hoped more would be done to ensure Syria’s nearly 5 million refugees are afforded a safe haven.

Hasan was aware of just how fortunate his family had been, describing their journey to Italy as a dream and recalling the welcome they received in Rome:

“They told us we were in a safe situation, because the pope has taken us into his care.”