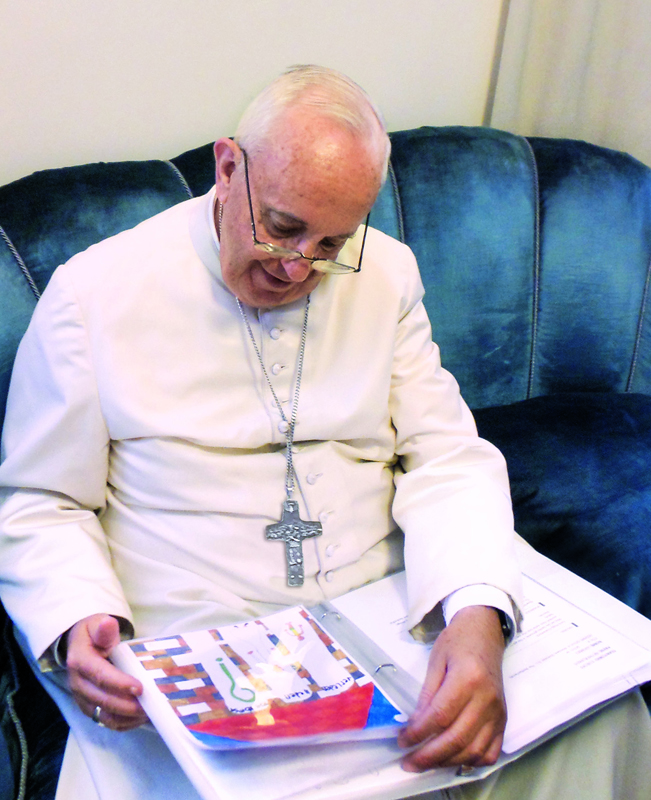 In his office in the Vatican, Pope Francis read the letters with questions submitted by children around the world. The letters, along with his answers, were published in a new book from Loyola Press, Dear Pope Francis: The Pope Answers Letters from Children Around the World. Photo by Antonio Spader, S.J., courtesy of Loyola Press
April 27, 2016
guest

This sponsored advertising content was made possible by Loyola Press. 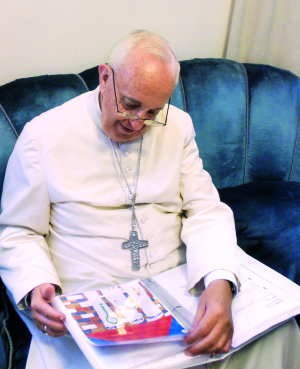 In his office in the Vatican, Pope Francis read the letters with questions submitted by children around the world. The letters, along with his answers, were published in a new book from Loyola Press, Dear Pope Francis: The Pope Answers Letters from Children Around the World. Photo by Antonio Spadaro, S.J., courtesy of Loyola Press

When editors at Loyola Press pitched an idea for a children’s book by Pope Francis, they expected the request would take weeks, possibly months, to wind its way up the chain of command at the Vatican. But after making the pitch on a Friday afternoon, they received their answer Monday morning.

“Yes,” the pope had responded.

The result is the first children’s book written by Pope Francis or by any sitting pope: Dear Pope Francis: The Pope Answers Letters from Children Around the World, released in March in English and Spanish. The letters were from 30 children, ages 6-13, from 24 countries and six continents. Topics range from “What did God do before the world was made?” to whether the pope likes soccer.

The book was completed in less than a year, thanks to the global network of the Jesuits, a religious order with educational institutions and missions in 112 countries on six continents. Loyola Press is a Jesuit ministry, and Pope Francis is the first Jesuit pope.

“It pays to work for an international conglomerate,” jokes Tom McGrath, the book’s U.S. editor and editorial director of trade for Loyola Press. “We were well poised to get this full representation from different countries because we had that connection.”

The Rev. Paul Campbell, Loyola’s publisher, is part of an international group of Jesuit webmasters, most of them connected to Jesuit-run schools or similar institutions. Loyola’s editors worked that network to track down Jesuits or lay associates in 29 countries who could forward one simple request to children, ages 6-13, in their communities: “Pope Francis would like to hear from you. What questions do you have?”

“At first we got a lot of questions along the lines of, ‘Do you like being pope? Is it fun driving the popemobile?’” says McGrath. “We wanted the letters to be unprompted as possible, but we went back and asked for more questions about God and life.”

The letters poured in from around the world into Loyola’s office in Chicago – in all, 259 letters from 29 countries in 14 languages.

The editors chose 30 letters, representing a range of topics and ages. Each letter was accompanied by a photo of the child and the child’s own drawing and assembled into a binder. Less than eight weeks after the pope’s initial response, the binder was winging its way from Chicago to the Vatican.

Shepherding the project at the Vatican was the Rev. Antonio Spadaro, a Jesuit and director of La Civiltà Cattolica, a Roman Catholic journal published in Rome.

“Father Spadaro made the original pitch, and sat at Pope Francis’ side as he read each question and looked at the pictures and photos,” says Andrew Yankech, Loyola’s business development manager.

The pope’s answers were recorded, and later transcribed and lightly edited for clarity in translation, but not condensed. At the end of the meeting, Spadaro says, the pope said, “It is beautiful to answer the questions of these children, but I should have them here with me, all of them!”

That wish was granted. In February, 12 of the young letter writers traveled from 10 countries to meet Pope Francis in the Vatican and to receive their first copies of the book.

Hand-drawn pictures illustrate Dear Pope Francis and reveal a sense of kinship the children feel for the pontiff. The cover image, by Judith, 9, of Belgium, shows the pope holding hands with her and her friends. João, 10, of Portugal, drew the pope at the wheel of the popemobile, passing adoring crowds. 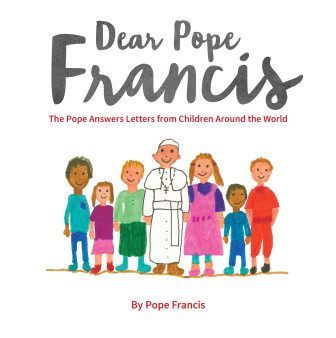 Some questions are poignant and deeply personal. Mohammed, 10, who attends a Jesuit-run school for Syrian refugee children, asked: “Will the world be again as it was in the past?”

“No, when the time comes, the world will not be as it was,” Pope Francis answered. “It will be far better than it was in the past.”

Luca, 7, from Australia, posed his question just a few months after his mother passed away: “My mum is in heaven. Will she grow angel wings?”

“No! No! No!” the pope responded. “She is still your mom, the person you know, but she is more radiant than ever.”

Other questions are lighter. Prajla, 6, from Albania, asked: “When you were a child, did you like dancing?”

“Really a lot!” replied Pope Francis. “As a young man, I liked to dance the tango. You know, dancing expresses joy and happiness. … Even the great King David danced.”

Campbell says the pope’s gift for answering complex questions in simple language has made the book a hit with parents as well as priests, who tell him they’ve used the book to help prepare their homilies.

Says Campbell: “The pope is generous, open-hearted and warm, and that just shines through in this book.”

PUBLISHER’S NOTE: This sponsored content was made possible by Loyola Press; it was not written by and does not necessarily reflect the views of the RNS editorial staff. To learn more, email [email protected].