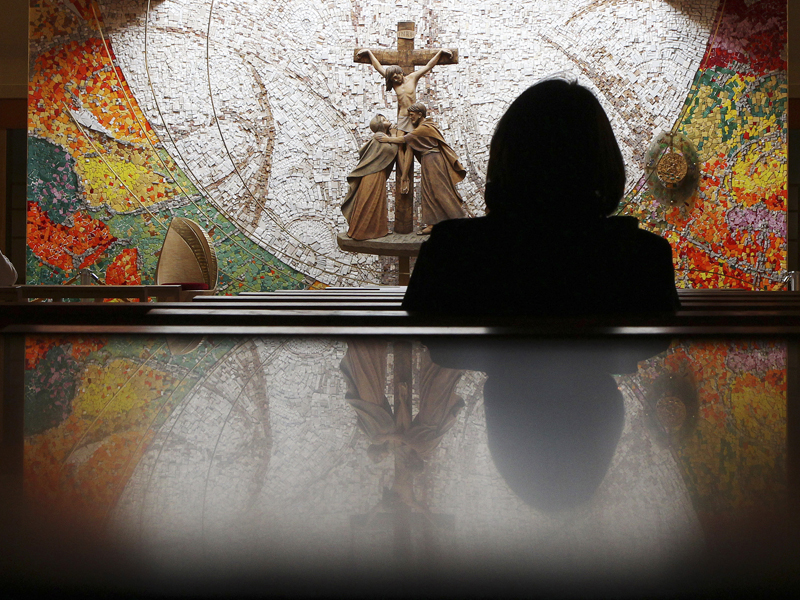 A visitor prays during Mass at a Roman Catholic Church in the village of Knock in County Mayo, in this photo taken on May 29, 2010. Photo courtesy of REUTERS/Cathal McNaughton *Editors: This photo may only be republished with RNS-IRISH-PRIEST, originally transmitted on May 5, 2016.
May 5, 2016
Yonat Shimron

(RNS) A religious order covered up the sexual crimes of an Irish priest who abused more than 100 children, some as young as 6, according to a new report.

The failures of the Salvatorian order to act on the crimes of a priest named “Father A” were outlined in a report released Wednesday (May 4) by Ireland’s National Board for Safeguarding Children in the Catholic Church.

During a career spanning more than 50 years, the priest sought out girls between the ages of 6 and 9 and abused them while visiting their family homes.

“Fr. A would stop visiting families when their daughters turned 10 years of age, as they were then outside his preferred target age group,” the report said.

The priest has been named in Irish media as the Rev. Patrick McDonagh, who was convicted in 2007 of sexually abusing several girls and died two years later.

The report described the priest as a “prolific, long term abuser of children” who admitted abusing more than 100 children across Ireland.

A female relative made the first allegations against the priest in 2002, accusing him of abusing her as a child. He was subsequently removed from his parish and his superiors wrote to the archbishop of Dublin, informing him the priest had been withdrawn due to stress.

The cover-up continued when the priest was moved to Rome, where the abuse allegation was not known, and he was sent to work in a hospital and archive.

The review of the Salvatorians’ handling of the case found that the priest continued to abuse children until at least 2004.

The Salvatorians case was one of 30 assessments of congregations in Ireland published this week, the majority of which were said to have shown progress in protecting children. The board, however, noted that from 288 allegations made against 90 individuals, only 10 criminal convictions resulted.

Similar investigations have also taken place elsewhere, including in Australia, where the work of the Royal Commission into Institutional Responses to Child Sexual Abuse is ongoing. The Vatican’s finance chief, Cardinal George Pell, gave evidence to the commission in March.

Within the Vatican, Pope Francis created the Pontifical Commission for the Protection of Minors in 2014. But the pontiff has been criticized for not doing enough to tackle child abuse, and in February one of the two abuse survivors on Francis’ commission was ousted.

(Rosie Scammell is the Vatican correspondent for RNS)