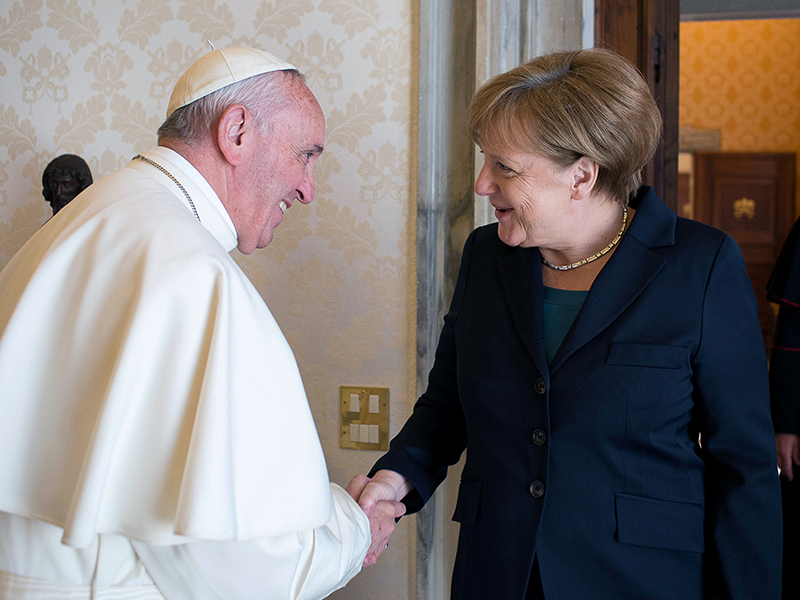 German Chancellor Angela Merkel greets Pope Francis during a private audience before the 2016 Charlemagne Prize ceremony at the Vatican on May 6, 2016. Osservatore Romano Handout via Reuters ATTENTION EDITORS - THIS IMAGE WAS PROVIDED BY A THIRD PARTY. EDITORIAL USE ONLY. NO RESALES. NO ARCHIVE.
May 6, 2016
Jerome Socolovsky

VATICAN CITY (RNS) Pope Francis is calling on Catholics to play a part in the “rebirth” of a united Europe that opens its doors to refugees.

The Argentine pontiff, who has been critical of European countries’ handling of the migrant crisis, made the comments as he picked up the prestigious Charlemagne Prize. The award, named after the founder of the medieval Holy Roman Empire, is given for work done in the service of European integration.

“What has happened to you, the Europe of humanism, the champion of human rights, democracy and freedom?” Francis asked, speaking to a hall in the Apostolic Palace filled with European dignitaries, including German Chancellor Angela Merkel.

In a lengthy speech, the pope quoted Holocaust survivor Elie Wiesel in saying the continent is in need of a “memory transfusion” and should revive the post-World War II spirit of unification.

He urged Europeans to resist the temptation “to yield to our own selfish interests and to consider putting up fences here and there. … "

“The founding fathers (of Europe) were heralds of peace and prophets of the future. Today more than ever, their vision inspires us to build bridges and tear down walls,” he said.

European leaders are under pressure to come up with working solutions to deal with the arrival of nearly 1.2 million migrants and refugees since the start of 2015, the largest group of which have fled Syria.

On April 16, in an effort to draw attention to the moral dimension of the migrant crisis, Francis visited a refugee camp on the Greek island of Lesbos and brought 12 Syrians back to Rome with him on the papal plane.

The pope said a vibrant Catholic Church can play a role in a “rebirth of Europe.”

“Only a church rich in witnesses will be able to bring back the pure water of the gospel to the roots of Europe,” he said.