People from the Baha'i religious community pose for a picture next to a giant painting created by Brazilian artist Siron Franco, as part of the "Five Years Too Many" protest campaign marking the five-year anniversary of the imprisonment of seven Iranian Baha'i leaders, on Copacabana Beach in Rio de Janeiro on May 5, 2013. The image represents that "Human beings should be free as birds," according to the artist. The Baha'i community in Brazil is protesting against the 2008 arrest of seven leaders of their religion in Iran for espionage, propaganda against the Islamic republic and the establishment of an illegal administration among other things, according to the organisers. Photo courtesy of REUTERS/Sergio Moraes *Editors: This photo may only be republished with RNS-GEORGE-OPED, originally transmitted on May 13, 2016.
May 13, 2016
guest

(RNS) The eighth anniversary this Saturday (May 14)  of Iran’s imprisonment of seven Baha’i leaders is an opportune time to refocus attention on the plight of their people.

Dominated by an extremist interpretation of Shiite Islam, Iran’s government has a long-term goal to eradicate the more than 300,000-member Baha’i community, the country’s largest non-Muslim religious minority. While pursuit of that goal remains, its intensity ebbs and flows in response to the level of world attention and outrage. Unfortunately, there are signs from this past year that persecution is on the upswing, calling for greater world outrage at Iran’s abuses of this peaceful religious community.

Since Iran’s Khomeini revolution of 1979, authorities have killed more than 200 Baha’i leaders, and more than 10,000 have been dismissed from government and university jobs.

Baha’is effectively are prohibited from attending colleges, chartering their own worship centers or schools, serving in the military, and obtaining various kinds of jobs.

Even Baha’i marriages are not recognized.

Over the past 10 years, about 850 Baha’is arbitrarily have been arrested. As of February 2016, more than 80 remain imprisoned, including the Baha’i Seven -- Jamaloddin Khanjani, Afif Naeimi, Saeid Rezaie, Behrouz Tavakkoli, Vahid Tizfahm, Fariba Kamalabadi and Mahvash Sabet.

According to the U.S. Commission on International Religious Freedom, on which we serve, there were ominous signs of a renewed government crackdown over the past year. In Tehran and other municipalities, Baha’i homes have been ransacked, Baha’i-owned shops closed, Baha’i religious materials confiscated and Baha’i members arrested. In January 2016 alone, 24 Baha’is in the Golestan province were sentenced to prison terms of up to 11 years simply for engaging in the religious activities of their faith.

Iran’s government also continues to issue a steady drumbeat of propaganda that demonizes and dehumanizes its Baha’i population. In 2014 alone, pro-government media and print outlets published nearly 4,000 anti-Baha’i articles in which Baha’is typically are portrayed as immoral traitors, agents of foreign powers, and strangers and aliens who don’t belong in the country.

The government’s demonization of Baha’is predictably creates a climate conducive to acts of violence against them that often are not prosecuted.

This is not to say that the Iranian government only targets Baha’is. Christians and members of other religious minorities also face persecution, including jail time. Since 2010, authorities arbitrarily have arrested and detained more than 550 Christians throughout the country. Over the past year, there were numerous reports of authorities raiding church services, threatening church members, and arresting and incarcerating worshippers and church leaders, particularly evangelical Christian converts. 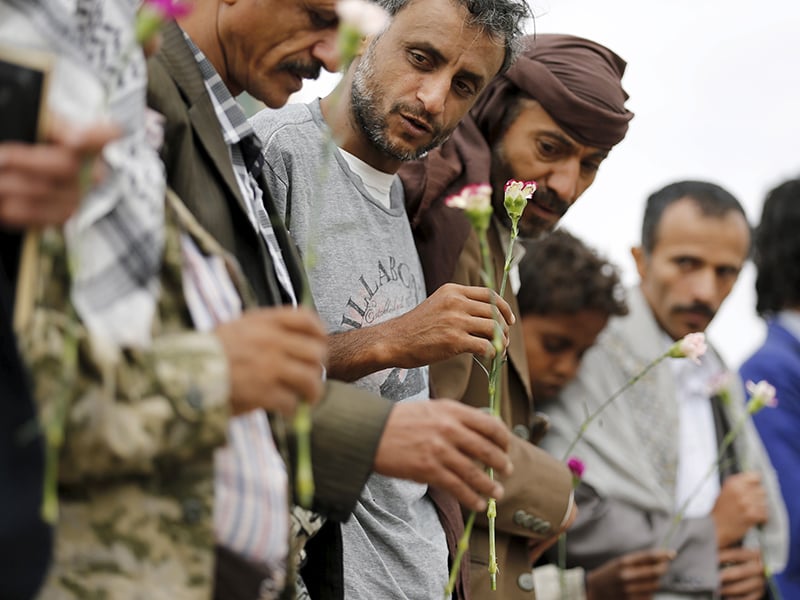 Members of the Baha'i Faith hold flowers as they demonstrate outside a state security court during a hearing in the case of a fellow Baha'i man charged with seeking to establish a base for the community in Yemen, in the country's capital, Sanaa, on April 3, 2016. Photo courtesy of REUTERS/Khaled Abdullah *Editors: This photo may only be republished with RNS-GEORGE-OPED, originally transmitted on May 13, 2016.

Jews and Zoroastrians also face official discrimination, and the government continues to foster anti-Semitism. Among Muslims, Iran’s government has imposed harsh sentences on prominent reformers from the Shiite majority community; imprisoned about 150 Sunni Muslims on charges relating to their beliefs and religious activities; and harassed and incarcerated members of the Sufi Muslim community.

But what distinguishes mistreatment of the Baha’is is the stark evidence that eradication is the goal. From laws that push Baha’is to the margins of society to government-sponsored propaganda that degrades and dehumanizes, from mass detention and imprisonment to the closing of businesses, from allowing societal violence against Baha’is to failure to prosecute perpetrators, all signs suggest that Iran’s government seeks religious cleansing of this community.

Responding to pressure from the United States and the world community, Iran in January released Saeed Abedini, a Christian pastor. It is time to demand that Iran do likewise to all religious prisoners, including the Baha’i Seven and the imprisoned Baha’i educators, and other prisoners of conscience. It is time for Iran to abandon its terrible goal of eradicating its Baha’i community and instead treat its members with the dignity and respect they deserve as human beings and citizens. It is time for Iran to uphold the right to religious freedom for each and every Iranian.

(Robert P. George is chairman of the U.S. Commission on International Religious Freedom; Katrina Lantos Swett is a USCIRF Commissioner)