A-list actor Vince Vaughn and two-time Academy Award winner Mel Gibson both took the podium to address more than 19,000 graduates at Liberty’s commencement (video posted below). They were joined by reality television star Willie Robertson of “Duck Dynasty” fame and Randall Wallace, the celebrated screenwriter of films such as “Braveheart,” “We Were Soldiers,” and “Secretariat.” The keynote commencement address was given by Rashad Jennings, running back for the New York Giants and a Liberty alumnus.

Colleges typically use commencements as a chance to showcase their academic bona fides by inviting well-known thought leaders and nationally known politicians to speak. But Liberty has never pretended to be an academic powerhouse. So its officials passed over the stuffy elites and invited well-known conservative celebrities instead. Beyond creating a fun public relations storyline, their choice of convocation speakers matters. After a year in which nonestablishment presidential candidates paid homage to Liberty’s students, this ceremony solidifies their place as a leader atop the conservative populism movement that’s sweeping the nation. 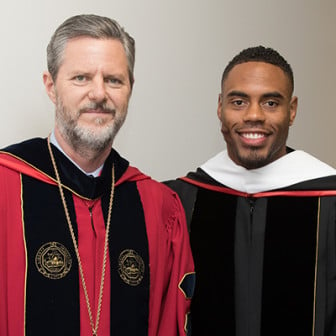 When Moral Majority founder Jerry Falwell started Liberty University, it was a popular place for conservative leaders to cast their vision for America. In 1990, President George H.W. Bush spoke there. When I was a student in the early 2000s, conservatives like Sean Hannity spoke in convocation. Karl Rove delivered the keynote address at my graduation ceremony. But when Falwell Sr. passed away in 2007 and his son Jerry Jr. took the reins, the university seemed to become less politically active.

That is, until recently:

These decisions elevated Liberty’s status as a leader, if not a kingmaker, within conservative populism, a movement whose ideology is marked by anti-elitism and distrust of government institutions including the Republican party power brokers — “the establishment.” Beck is a popular leader among populists, and Cruz, Carson, and Trump each positioned themselves as political outsiders.

Liberty’s commencement seems to push the school further in the populist direction. Rashad Jennings remarked that he wasn’t politically correct enough to be president. He added, “When it comes to political issues, there is one thing that literally trumps everything and helps everything go back into proper perspective and that is that the Bible tells us we can overcome this world by our faith.”

Robertson, the “Duck Dynasty” star whose son is a student at Liberty University, addressed the crowd with his homespun Southern accent while wearing an American flag bandana. “Be infectious around people with a positive attitude of Christ,” said Robertson. The Robertson family’s conservative social and political views have created much public controversy in recent years. 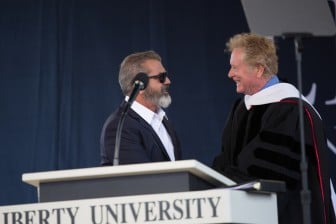 Gibson is a similarly controversial figure due to a DUI arrest, verbally abusive comments toward women, and history of anti-Semitism, but his blockbuster film “The Passion of the Christ” has made him a revered figure among some Christians. Gibson’s comments at the ceremony certainly appealed to the populist crowd: “Stories are important to us all, and when I make stories, I don’t make them for an elite. I make them so that other people can witness them and be inspired by them.”

Vaughn took the podium after Gibson. The star of “Swingers” was also a strange choice for a conservative evangelical school with fundamentalist roots. In a 2015 interview with Playboy magazine, Vaughn said he is a religious “questioner” who believes God exists. He supports same-sex marriage, has also become known as a political libertarian who opposes gun control and disagrees with Obama’s political agenda. 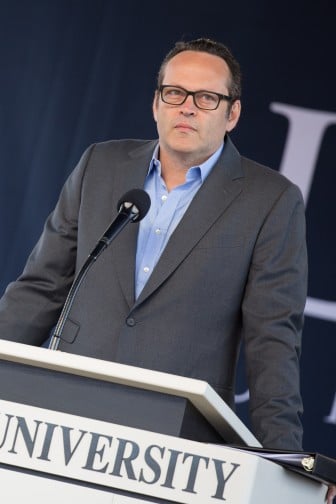 Vaughn is known for crass films like “Wedding Crashers“, a movie in which he famously received sexual stimulation under a table. Gibson’s fame is largely derived from violent, R-rated action flicks. Until 2015, Liberty students were barred from viewing most of either actor’s films. (In Vaughn’s speech, he threatened to sing Whitney Houston’s “I Wanna Dance with Somebody.” Ironically, Liberty students are punished and fined $25 if they attend a dance.)

Liberty has been drawing political power brokers into its orbit for decades, but the 2016 commencement shows it can attract A-list Hollywood actors, television personalities, and sports stars too. The ability to leverage influencers from both the entertainment and political sectors is impressive.

Liberty’s aggressive ascension to the top of the conservative populist heap has not been without cost. Falwell was publicly criticized for his gun comments and Trump endorsement by several prominent Liberty alums. Even Mark DeMoss, chairman of Liberty’s executive committee and a former confidant of the late Falwell Sr., publicly expressed his disappointment in Falwell Jr.’s endorsement and the direction the school seemed to be taking. DeMoss is a longtime supporter of Liberty, and the largest academic building on campus is named after his father. Regardless, he felt pressured to resign from the executive committee, and later, the school’s board of trustees as a result of tensions created.*

Liberty has taken risks to pave this path, and Falwell shows no sign of turning back. Don’t expect Liberty to fall from prominence anytime soon. The school is flush with cash and its net assets are in the neighborhood of $1 billion. Liberty’s campus is in the midst of a construction overhaul that will end up costing around $500 million and involve more than 60 building projects. The conservative populist movement continues to build steam, and if candidate Trump becomes President Trump, he’s not likely to forget Falwell’s support.

When you look at a map, don’t be fooled by the size of that tiny dot over Central Virginia. That sleepy town of Lynchburg may just be waking up.

Below are the videos of the commencement ceremony featuring Willie Robertson, Randall Wallace, Mel Gibson, Vince Vaughn, and Rashad Jennings:

*The following statement was provided by Liberty University regarding Mark Demoss’s resignation:

The Board of Trustees had no interest in removing Mark DeMoss from the Board or asking him to resign from the Board.  Any displeasure on the part of the Board or individual Board members arose not out of his disagreement over candidate preference (Board members supported different candidates) or with Jerry Falwell’s personal endorsement.  It arose out of his going to the press with University Board business.  The interview with the Washington Post went well beyond disagreeing about Donald Trump as the best candidate for president.  Mr. DeMoss publicly communicated his concerns about Liberty University as chairman of the Board’s Executive Committee.  He shared a negative evaluation of Jerry Falwell, not as an individual, but concerning his presidential stewardship of the values and legacy of Liberty University. It was an extraordinarily public way to deliver a message of disagreement, especially from one person in leadership at a university to another.  It is simply not the way Board members should discuss their concerns about the University or pronounce their evaluations of its President.  As Executive Committee Chairman, Mr. DeMoss was a board member who could have single-handedly called a meeting to privately discuss his concerns with fellow Board members and the President, which is the only appropriate way for such matters to be addressed by Board leaders. Most universities would have immediately removed a board member who went to the media instead of the board with concerns about the university and with negative assessments, but Liberty’s Board extended Mr. DeMoss grace, voted unanimously to accept his apology and allowed him to stay on the Board, only asking him to step down from its Executive Committee.  Mr. DeMoss appeared to accept this resolution when he resigned from the Executive Committee and apologized to the Board but then changed his mind and resigned from the Board four days later.  That decision was entirely his.