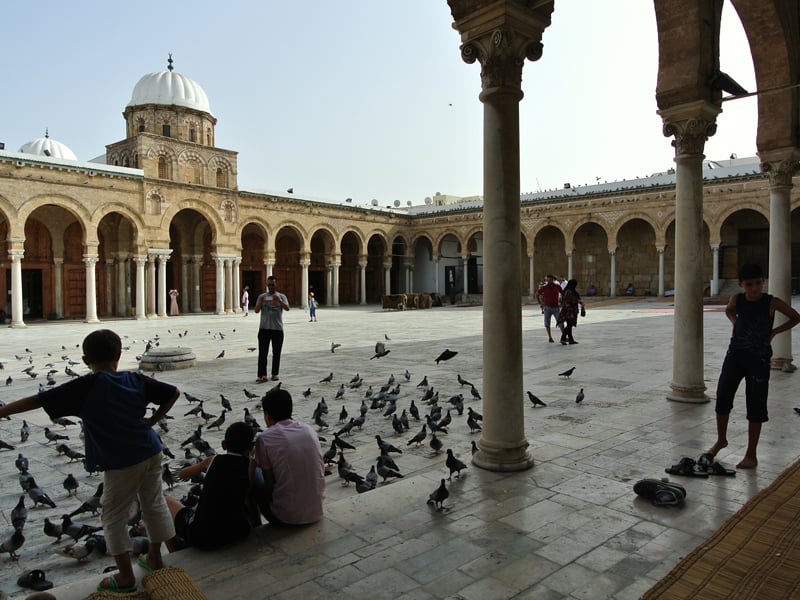 (RNS) Tunisia’s Ennahda movement, the most successful Islamist party to emerge from the Arab Spring revolts early in this decade, has renounced political Islam and declared it will operate in the country’s politics as “Muslim democrats.”

A party congress over the weekend in the beach resort of Hammamet voted almost unanimously to drop Ennahda’s traditional religious work and participate in Tunisian politics as a regular political party. Rached Ghannouchi, 74, is an Islamist activist who developed into an influential Muslim thinker during his 22 years of exile from Tunisia’s earlier dictatorships.

The reform represented a major victory for Ennahda’s leader Rached Ghannouchi, 74, an Islamist activist who developed into an influential Muslim thinker during his 22 years of exile from Tunisia’s earlier dictatorships.

Given a hero’s welcome on his return in 2011 after the fall of strongman Zine al-Abidine Ben Ali, he proved himself an astute politician as he guided his party during a stormy period in power and then bowed to public pressure and agreed to a 2014 election won by Ennahda’s secular conservative rivals.

"We have to differentiate between political and religious activity ... we want religion to unite and not divide Tunisians,” Ghannouchi told the Paris daily Le Monde just before the congress opened on Friday (May 20).

“We want a party that talks about everyday problems, and not one that talks about the Last Judgment and Paradise. We want religious activity to be completely independent of political activity."

One reason for the change was Tunisia’s relative political stability and the prospect for elections next year, he explained.

Another was that the so-called Islamic State movement had so discredited political Islam that Ennahda had to "show the difference between the Muslim democracy we support and the extremist jihadist Islam from which we want to distance ourselves.”

A quick look at the other countries most active in the Arab Spring protests shows how different Tunisia’s path has been. Egypt also elected an Islamist government, but its Muslim Brotherhood leaders were overthrown by the army in 2013 after trying to impose their religious views on the society.

Libya fell into chaos after ousting dictator Moammar Gadhafi and split into two, with rival governments in the east and the west and an Islamic State stronghold along the coast between them. Syria descended into a bloody civil war that has become an international crisis.

Ghannouchi went abroad, but unlike many other Arab intellectuals who chose refuge in another Muslim country or France, he moved to London. He later said his 22 years in Britain showed him that a secular democracy could grant Muslims more freedom than the religious states most Islamists dreamed of.

His reformist writings won a following in Turkey in the 1990s, inspiring the Justice and Development Party, known as AKP, that has governed the country since 2002. Following the “Muslim democrat” model, it turned Turkey into a modern political and economic success story and looked like an inspiration for other Muslim countries.

The AKP’s star has faded badly in recent years, however, as President Recep Tayyip Erdogan has become increasingly autocratic, amassed power and crushed his opposition.

Ennahda was elected in October 2011 to lead a transition government meant to draft a new constitution and hold parliamentary elections. While it preached reform, the party turned a blind eye to radicals trying to impose Saudi-inspired orthodox Islam on the country, sometimes by force.

But after two assassinations of leftist politicians in 2013 and the army coup against the Muslim Brotherhood government in Egypt, Ghannouchi signaled he was ready to reach a compromise with the secular opposition.

The Tunisian National Dialogue Quartet, a team of four civil society activists, guided the delicate transition to an election the following year and was awarded the 2015 Nobel Peace Prize for its work.

Although Ennahda has now sworn off all religious activity, it has not renounced Islam itself. Instead, the party’s new identity stresses faith as the source of inspiration for its center-right policies, much like Christianity was a reference point for the Christian Democratic parties that emerged in Europe after World War II.

“We are leaving political Islam to enter into Muslim democracy … Ennahda is a democratic and civil political party based on Muslim and modern civilizational values,” Ghannouchi told Le Monde, carefully avoiding the word “secular.”

Ghannouchi’s towering role in Ennahda, where he is simply known as “the Sheikh,” should guarantee this reform remains party policy for the immediate future.

What happens after he leaves the leadership is less clear, since the party’s important “internal” wing -- those who spent many of the dictatorship years in jail -- is more militant than the “external” wing of reformist former exiles like Ghannouchi.

Many in the “interior” wing used mosques and Muslim associations for years to mobilize followers in the Muslim Brotherhood style, and analysts say these old habits could re-emerge when Ghannouchi leaves the party leadership.

Tunisian political analyst Riadh Sidaoui said the country’s secular political tradition, a legacy of its decades as a French protectorate, could act as a check on any attempt to swing back to Islamism.

“The Ennahda leadership understands that Tunisian civil society will not give up its privileges easily. One cannot go backwards and turn Tunisia into Saudi Arabia,” he told the French magazine L’Obs.