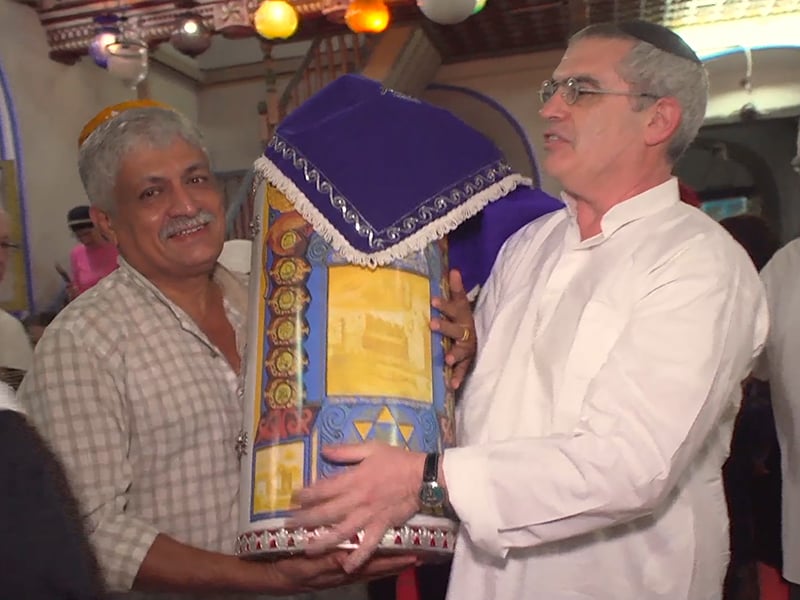 Elias Josephai and Ari Greenspan carry the Torah scroll during a service in the synagogue in Cochin, India. Photo courtesy of Religion & Ethics Newsweekly
May 25, 2016
Jerome Socolovsky

COCHIN, India (RNS) A nearly 900-year-old synagogue recently held its first Sabbath service in decades in one of the diaspora’s farthest flung places: the coastal Indian city of Cochin.

Congregants came from four continents for what could be the last such observance in a region whose once-thriving Jewish communities have mostly migrated to Israel.

“On the other hand, I’m very happy to see that after all these years of dispersion the prophecy of the return to the land of Israel is in my time -- I’m part of it -- is being realized. At least we see how life was once here.”

Jewish life along India’s Malabar Coast dates back to the ancient spice trade that drew explorers from across the sea. In ancient times, Jews from Yemen and Mesopotamia came to trade, and some settled in the area. Others came from Spain and Portugal after the Inquisition.

However, Malabari Jews began leaving for the Holy Land in the 1950s, seeking better economic prospects, religious fulfillment or both. Some synagogues and Jewish cemeteries were handed over the municipal authorities, often falling into neglect or eyed for redevelopment. 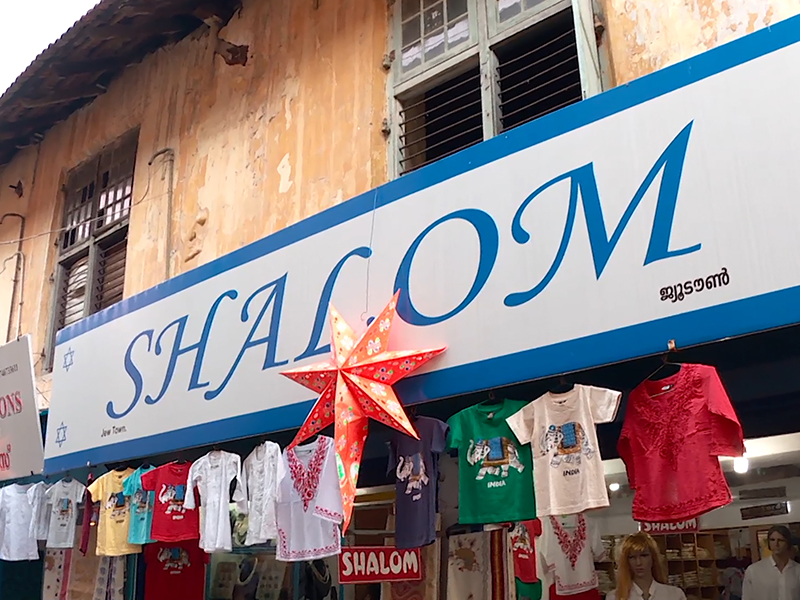 A Jewish-themed shop near the nearly 900-year-old Kadavumbagam synagogue, which recently held its first Sabbath service in decades in one of the diaspora’s farthest flung places: the coastal Indian city of Cochin. Photo courtesy of Religion & Ethics Newsweekly

“The coming generation must know that there was a Jewish community here,” said C. Karmachandran, a retired professor who now heads a local historic preservation committee.

“One of the most important criticisms that India faces at present is the religious intolerance between segments of society, and this is a lesson of tolerance,” he added.

“They were given all the protection by the rulers, as well as the local people, to maintain their culture, their religion. And this in fact is the living symbol of that particular lofty tradition,” Karmachandran said during a tour of another synagogue in the small town of Mala, which, like Cochin, is also in the state of Kerala.

In Cochin, the regional hub, only about 30 Jews remain. One of them is Elias Josephai, the synagogue’s 60-year-old Jewish caretaker. He runs a nursery and aquarium supply business in the space where children once studied on the Sabbath.

The synagogue proper serves as a dusty warehouse. Its sacred scrolls were donated years ago to a museum in Israel.

“I cry every Sabbath. Every holiday, I cry in my heart,” Josephai said.

Ari Greenspan, a Brooklyn native who lives in Israel, heard the same lament when he visited the synagogue a year ago on a vacation in India.

“When he told us that they hadn’t prayed in that synagogue since 1972, I said to myself, I’ve got to come back with a group of 10 men,” Greenspan said, referring to the minyan or quorum of 10 men required to hold a complete Orthodox Jewish prayer service.

“I came here out of interest to see the various ways Jews have lived throughout the world. With the changing situation there are fewer and fewer Jewish communities as things become more centralized,” said Larry Linhoff, a Highland Park, N.J., resident, who was one of 35 people in the group.

“It’s wonderful to go into a building which hasn’t been used in a very long time. At least you’re able to have it function again for the purpose a synagogue was meant, namely to hold a prayer service,” said Michael Wimpfheimer, also of New Jersey. “It’s kind of a revitalization, even for a short time.”

For Josephai, it was a dream 44 years in the making. As the visitors entered a sanctuary that had been spiffed up, they heaped praise on their host.

“You’re sort of on the cusp because when he goes -- he should live to be 120 years old," Greenspan said, using a common Jewish expression.

"When he goes, that’s it,” he added. “Two thousand years of Cochin is gone.”

Josephai actually plans to be gone in four years, retiring and doing what thousands of his fellow Malabar Jews have done over the years: make Aliyah -- or settle in Israel.

But it is a wrenching decision, leaving a land he holds dear and a place so influential in forming who he is.

“I’ll keep my heart over here and then go. Always, I love India but it is inevitable. One day, today or tomorrow I have to leave the country,” Josephai said. “Not because of discrimination but as a Jew, to live as a Jew.”