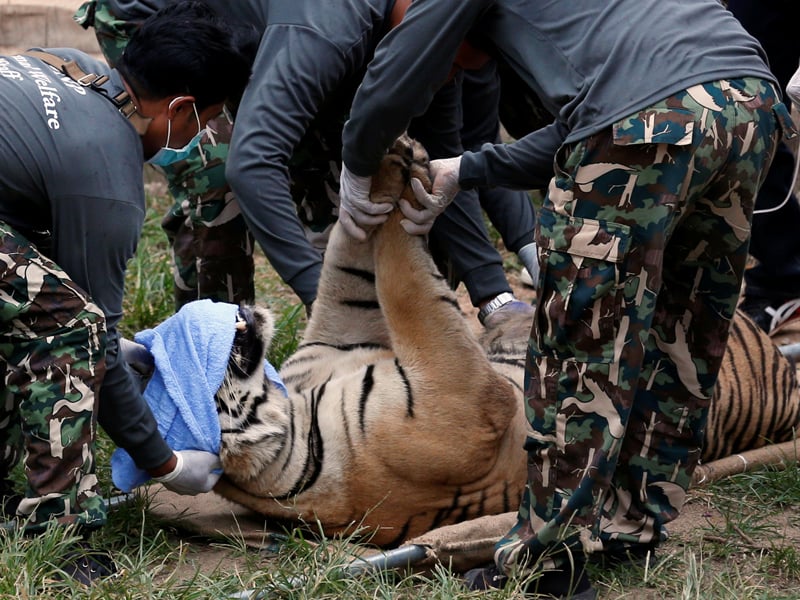 A sedated tiger is stretchered as officials start moving tigers from Thailand's controversial Tiger Temple, a popular tourist destination that has come under fire in recent years over the welfare of its big cats in Kanchanaburi province, west of Bangkok, on May 30, 2016. Photo courtesy of REUTERS/Chaiwat Subprasom *Editors: This photo may only be republished with RNS-THAI-TIGERS, originally transmitted on June 2, 2016.
June 1, 2016
guest

Forty dead tiger cub carcasses were found in a freezer at a Buddhist temple in Thailand, wildlife authorities said.

"They must be of some value for the temple to keep them," Adisorn Nuchdamrong, deputy director-general of Thailand's Department of National Parks, told the Reuters news agency. "But for what is beyond me," he said.

The animals were found in the nation's infamous Tiger Temple, a monastery-cum-wildlife park and tourist attraction in Kanchanaburi province west of Bangkok. A raid to remove live animals from the temple began Monday (May 30) amid an investigation into suspected wildlife trafficking and abuse. All species of tiger are endangered.

A representative from Tiger Temple could not be reached Wednesday but the sanctuary has previously dismissed allegations that it has sold animal parts of bred tigers for profit. Exotic animal and tiger parts are in extremely high demand in Asia, especially in China, where they are used in traditional medicine.

Thailand has a reputation for being a center for illicit wildlife trafficking and the government has introduced legislation aimed at preventing maltreatment. Critics say the legislation does not go far enough to curb abuses.

The People for the Ethical Treatment of Animals, an activist group, said Tiger Temple was "hell for animals," Reuters reported.