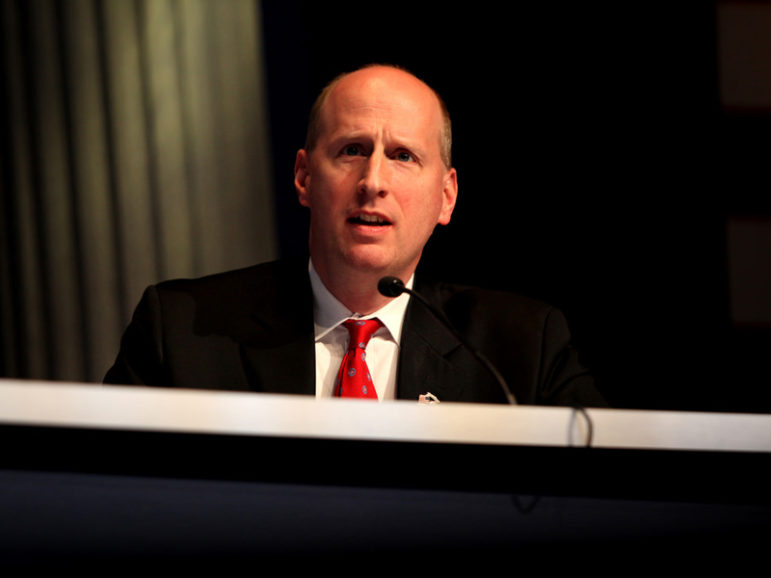 David French speaks during the 2012 CPAC in Washington, D.C.

(RNS) If some political conservatives are appalled that Donald Trump is now the presumptive Republican presidential nominee, many social conservatives — especially evangelical Christians, who are the soul of the movement — have been practically gnashing their teeth over the stunning success of the brash New York real estate magnate.

That dynamic of near-despair also explains why the news that National Review columnist David French is being pushed for a third-party run by #NeverTrump conservatives was greeted by many on the religious right with praise bordering on adulation.

“I have said before that whoever has the courage to confront Donald Trump would be a hero and a patriot. That man is David French,” Denny Burk, a Southern Baptist seminary professor and widely followed conservative commentator, wrote on his blog.

Burk was writing on Wednesday (June 1), a day after Bloomberg News broke the story that French was the secret third-party candidate that Weekly Standard editor Bill Kristol has been hinting about for days.

“Should David French raise the money and get [on] the ballot, I’d relish being able to support him and vote for him,” wrote Eric Erickson, another Christian conservative and popular pundit. “For the first time in two [election] cycles I’d have a candidate I want to vote for.” 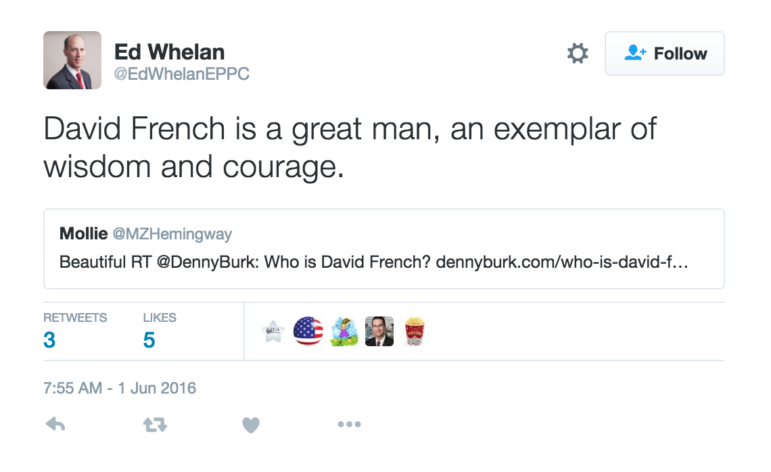 “David French is a great man, an exemplar of wisdom and courage,” tweeted Ed Whelan, head of the Ethics and Public Policy Center, a Washington-based conservative think tank.

Such encomiums, clearly mixed with relief, are understandable: Trump is seen as an unreliable conservative with a dodgy past, questionable beliefs and an incurable penchant for boorish behavior.

French, on the other hand, is a churchgoing Presbyterian with a Calvinist temperament and a heart of gold, and he’s a whip-smart conservative who likes to throw elbows in columns and on social media — and he usually winds up giving better than he gets.

He’s also a constitutional lawyer and author who went off to fight in Iraq when the war was going badly there (and won a Bronze Star), and he lives in Bible Belt Tennessee with his wife, Nancy French – a best-selling author in her own right who helped Sarah and Bristol Palin write memoirs – and their three children.

Plus, French is a not a career politician, which is perfect in the Era of Outsiders, and he disdains Donald Trump as much as Hillary Clinton, the likely Democratic nominee who many social conservatives see as no option at all this November.

In other words, French is the kind of candidate who principled believers could vote for with a clean conscience and genuine excitement.

“David French’s candidacy would allow social conservatives the ability to stay relevant in a general [election] where they might otherwise be sidelined,” tweeted Michael Wear, a young evangelical who worked on faith-based outreach efforts for President Obama.

The reality is that while French is beloved by his friends and well-known among the punditocracy, his name recognition with the electorate, and his pull with the donors who would have to pony up big bucks just to get him on state ballots much less wage a campaign, approaches zero.

“I suspect we could hold his nominating convention in a decent-sized phone booth,” the conservative columnist Matt Lewis wrote in Roll Call. “I’d love to have [French] as a colleague or a neighbor,” Lewis continued. “What he is not, however, is a serious presidential contender.”

Moreover, Trump has already attracted the support of a substantial chunk of the GOP’s key white evangelical Christian base, and he has won over a number of conservative Christian leaders. They’re not likely to ditch a candidate with a good chance of winning for a guy with no chance.

That means, in effect, that voting for French could be viewed as little more than a shortcut out of a tough moral quandary, a “vanity vote” that would allow a relative handful of anti-Trump conservatives who – out of principle or pride – have refused to jump on the Trump bandwagon to avoid choosing the lesser of two evils (or as Erickson put it, “the evils of two lessers”).

Yes, French’s backers could argue that they are throwing a lifeline to social conservatism.

But in fact, voting for French would not be much different from abstaining altogether or writing in the name of some other candidate; both of those are also serious, considered decisions, yet they are also conscious acts of protest taken in the full knowledge that by denying support to Trump they would boost Clinton.

Beyond the “moral hazard” debate, there’s a serious political risk if in fact French does inspire some measurable support — but only enough to give Trump and his allies the chance to pin an eventual loss on French’s third-party effort, whether or not that effort did have any actual effect on the outcome.

That would be akin to what happened in 2000, for example, when many Democrats blamed Ralph Nader for siphoning enough votes away from Al Gore in Florida to muddy the results and hand the White House to George W. Bush.

“I am increasingly convinced an independent candidate just gives Trump one more excuse and one more target of blame for what I think is his inevitable defeat,” wrote Erickson, adding that “more and more I wonder if, for the good of the conservative movement, we should watch Trump fall on his own instead of providing him a conservative scapegoat.”

By that reasoning, the best outcome for the Republican Party, and social conservatives, is a resounding defeat that exposes Trump and the GOP and leads to a genuine political and moral reckoning.

So what will David French do?

It still wasn’t clear as the week wore on. French’s wife, Nancy, told MSNBC on Wednesday that while her husband would “be great” as candidate, “we just don’t know if it’s the right thing for him to do.”

Later that day David French teased his supporters with a seemingly ironic tweet that read: “All the normal political rules apply. The conventional wisdom has been right. An underdog can’t win. Right?”

Then late Wednesday night, Nancy French tweeted that her husband was “in Vermont thinking and praying” and, she added, “if I know him he’s watched this clip at least once” – and she linked to this video of a famous speech, delivered at a dark moment for the heroes in “The Lord of the Rings,” asserting that “there’s some good in this world … and it’s worth fighting for.”

But “The Lord of the Rings” is also a fantasy epic in which good triumphs over evil, and unless some Tolkien-like miracle occurs, that storyline has precious little to do with the realities of American politics today, and how it will go for David French in the coming election struggle.