(RNS) As Bernie Sanders’ insurgent campaign for the Democratic presidential nomination heated up in these past months, so too did comparisons between the fervor fueling Sanders’ political movement and the faith-based mobilization of an old-time religious revival.

“More than any other candidate Bernie draws on the language of right and wrong to make his pitch. Politics for Bernie isn’t a job, it’s a crusade,” Grant Diamond, pastor of Faith Baptist Mill Creek, west of Chicago, wrote on his blog last month.

“As a preacher myself I can’t help but admire the righteous fury with which he moves crowds and fills stadiums,” said Diamond, while noting that the fascinating aspect of Sanders’ “appeal to righteousness is that it’s a secular righteousness.”

For those seeking a precise parallel in American religious history, the most common — and convincing — analogy for the Sanders movement is to the Second Great Awakening, one of three (or perhaps four, depending on who’s counting) spiritual explosions that have periodically transformed society since the Colonial days. 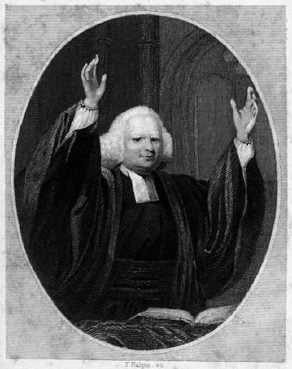 The first “awakening” was a revival that began in the 1740s, fueled by the renowned traveling evangelist George Whitefield, and it stirred grass-roots believers and helped lay the groundwork for the American Revolution.

The second such awakening, the one that most brings to mind the Sanders campaign, dates from around 1800 and ran up through the middle of the 19th century.

It was also a grass-roots movement, mainly of Protestants — Baptist and Methodist membership spiked during that era and new denominations were created in its wake — and the upstate New York region identified as the heart of this Second Great Awakening was marked by such religious fervor that Charles Grandison Finney, a leading preacher of the day, dubbed it the “burned-over district.”

In today’s political context, the term “burned-over district” is not just an analogy but an irresistible opportunity for a pun, which is why more than a dozen religion scholars from the University of Chicago Divinity School who are studying the Second Great Awakening titled a recent essay comparing that revival with the Sanders’ campaign “The Berned-Over District.”

In the essay, the scholars underscore the irony that Sanders is the most secular major candidate in the 2016 race, and perhaps in U.S. history. But they also detail how closely Sanders’ movement does in fact track a spiritual movement like a Great Awakening.

Yet the real test of how closely the Sanders revival parallels American religious history will be seen in how his followers respond to what appears to be an inevitable disappointment as his Democratic rival, Hillary Clinton, can now claim enough delegates to be considered the party’s presumptive nominee.

Faced with defeat, will the “Bernie Bros” and their allies melt away into the ranks of disaffected nonvoters? Will they instead work to propagate Sanders’ populist message in the Democratic establishment? Or will they try to undermine Clinton’s campaign and perhaps create a schism in the Democratic Party?

As this post-primary stage unfolds, perhaps the most instructive example to consider may not be the Great Awakening but rather what is known as the Great Disappointment — the letdown that true believers in the Second Great Awakening’s more messianic elements experienced when prophecies of Christ’s imminent return did not materialize.

The Great Disappointment forced followers of one of the revival’s more charismatic figures, the Baptist preacher William Miller, who had pegged the second advent of Jesus for sometime in 1844 or 1845, to reckon with what happened when Jesus did not return and establish the reign of peace and justice they had been promised.

Many of these so-called “Millerites” did indeed find a rationale for going forward with their faith intact, and the Great Disappointment actually gave birth to a number of religious movements, most notably the Seventh-day Adventist Church.

That phenomenon was also a precursor of the famous “cognitive dissonance” theory that psychologist Leon Festinger and his colleagues described in the 1950s when they infiltrated an apocalyptic cult and observed what happened when the cult leader’s prediction of an end of the world did not come to pass.

In their book “When Prophecy Fails,” Festinger and the other authors described how the members were so invested in the group’s belief system that they sought coping mechanisms to square their views with facts that belied those beliefs rather than altering or abandoning the doctrines. One such mechanism was to enlist others into the movement to provide social support and affirmation.

While cognitive dissonance was first defined in a religious context, it has obvious applications in the secular world, and die-hard Sanders supporters can certainly sound like they are setting themselves up for a similar reaction.

For example, some of them increasingly seem to be diverting their enthusiasm, which remains as strong as ever, from what were once blithe declarations of inevitable victory to darker theories about rigged votes and back-room machinations by a suspect rival. Their cause was so right and so just, they argue, that conceding defeat would betray the mission. So they must press on.

Sanders himself has seemed to tilt in that direction at times, to the chagrin of Clinton backers and a Democratic establishment that wants a more unified and predictable following — much as the established denominations of 19th-century America disdained the enthusiastic spirituality of the Second Great Awakening.

But the aftermath of the Second Great Awakening, even more than the revivals that came before and after, also took another direction for its less apocalyptic adherents that could provide another model for the Sanders movement.

Rather than waiting for deliverance from above, these devotees — followers of preachers like Finney more than Miller — channeled the zeal of their conversion into progressive movements such as the abolition of slavery, women’s suffrage, prison reform, temperance and a host of other causes that would later come under the umbrella of the “Social Gospel.”

Could Sanders inspire such a movement? As the longtime independent senator from Vermont, he hasn’t been known for building coalitions or courting allies to pass significant legislation.

But at a rally in San Diego on Sunday (June 5), even as he talked about a “contested convention,” the 74-year-old Sanders did seem to nod to the reality of the delegate math, telling a raucous crowd that his message of social, economic and environmental justice would eventually prevail even if he did not win the nomination:

“That message is now in the hearts and souls of the overwhelming majority of younger people in this country, which means our message is the future of America!” Sanders declared, according to a report from NPR.

Now it remains to be seen if Sanders’ secular choir will give that vision a hearty “Amen!”