WASHINGTON (RNS) The prospect of choosing between Donald Trump and Hillary Clinton for president is driving Veronica Mahaffy straight to prayer.

To this lifelong conservative Christian and Republican voter, he’s a “mocker” — the kind of arrogant, heedless man who’s condemned in the Bible — and he’s “corrupt.”

Trump did not change her mind with his address Friday (June 10) to 1,200 people including Mahaffy, a Pennsylvania retiree who came here for the three-day Road to Majority gathering of the Faith & Freedom Coalition and the Concerned Women for America.

Trump came to the podium with opening words of gratitude. “We’ve done very well with all the evangelicals,” he said, adding “I happen to be Presbyterian. There’s about three of you out there.”

Trump’s calm and careful speech (with a teleprompter) was focused on “our shared values.” He drew applause with pledges upholding the sanctity of life and marriage as “the building block of happiness and success.

“It’s more important than the money,” said the thrice-married billionaire.

The crowd clapped and flashed cell phone cameras as he whacked “crooked Hillary” who, he said, refuses to even say the words “radical Islamic terrorism” — a phrase he repeated at least five times. “This alone makes her unfit to be president.”

A handful of young women protesters calling out anti-Trump slogans were quickly muscled out of the room. While the crowd shouted, “Trump! Trump!” and “USA,” Trump just shook his head, saying, “So sad. So sad,” and dismissing them as “professional agitators.”

Mindful perhaps of GOP critics alarmed by his inflammatory rhetoric on race and ethnicity, Trump said a Clinton presidency would “be a crushing blow to poor people. And she will send blacks and Hispanics turmoil and even worse, despair.”

But his policies on judicial appointments, trade, education and families would restore the luster of faith and respect in our culture, said Trump. “Together we will chart a new optimistic course for America.” 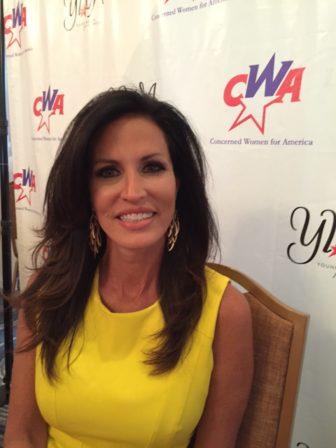 Before Friday’s event, CWA president and onetime Ted Cruz supporter, Penny Nance already had swallowed hard and reluctantly endorsed Trump despite his personal history — a history at odds with most of the biblical principles at the core of the women’s public policy group for 35 years.

“It’s hard.” Nance said. She was appalled that Trump did not step up immediately to support bills blocking transgender access to public restrooms, telling Breitbart News, “conservatives are right to question Donald Trump’s judgment. … His instincts are wrong on our core values.”

Nance has a visceral disrespect for Clinton so there’s no left turn in her future. But she also said Friday afternoon, “I’m am not laboring under any delusion that Trump’s a Bible-banging evangelical.”

She respects those Republican primary voters who chose him. Still, Nance said Friday afternoon, “My worst nightmare” is that after all the passionate volunteer efforts of conservative women to deliver the vote this fall, “we wake up one morning and discover it was all a ruse.”

The focus now for CWA is, as it was from the beginning, to bring the nation back to biblical principles no matter who is elected. Nance acknowledged that in more than three decades, society has become markedly “less religious than ever before.” But she said, “I’m blessed to work with women who are not a bit cowed by this challenge.”

Trump has been all over the map on core issues for the CWA, including opposition to abortion. The Washington Post calculated that he took five different positions on abortion in three days this spring.

Friday morning’s speakers at the Road to Majority gathering were front-loaded with members of Congress who raised amens from the audience with calls to “save this country.” U.S. Rep. Virginia Foxx, R- N.C., urged them not to let the race turn on
“personality” or stay home discouraged and leave the election to “the Philistines.”

Senate Majority Leader Mitch McConnell, R-Ky., recited a litany of what the GOP majority has accomplished — and what Obama vetoed. But he never named Trump. Neither did most of the speakers. Their pitch: Only a new president stands between hope and the death of American freedom at the hands of Democrats.

Faith & Freedom organizer Ralph Reed did mention the presumptive nominee and made clear that perfection was not the standard for judgment: “We are not looking for a political messiah. We already have a messiah.”

“We serve a mighty God who uses imperfect people to achieve his perfect will,” he said.

Outside the Omni Shorham Hotel, Catholics in Alliance for the Common Good held a news conference to denounce Trump as “a total affront to the gospel of Jesus Christ.”

Veronica Mahaffy, who hangs up on Trump campaign robocalls, is not holding her breath. 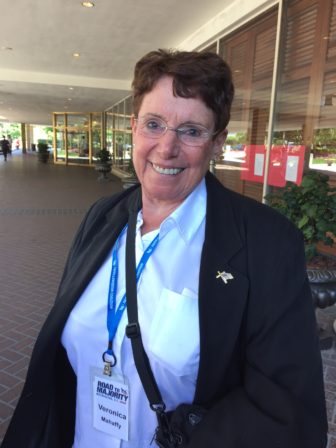 Veronica Mahaffy is one of many conservative Christian women who struggle with the prospect of voting for Donald Trump. RNS photo By Cathy Lynn Grossman

“He doesn’t love God more than money,” said Mahaffy, 74, a retired nurse anesthesist who traveled with her husband from Chadds Ford, Pa.

“I don’t think he even believes in God,” she said.

On the other hand, nothing could make her vote for Clinton — no matter that the former secretary of state is a lifelong churchgoing, Bible-reading Methodist. Mahaffy said Clinton’s actions and policies don’t align with Scripture as she reads it.

Friday, Trump’s speech didn’t bring either Mahaffy on board — yet.

Come Election Day, confronted with the choice, Veronica Mahaffy said, “I am going to pray and ask God for wisdom.”