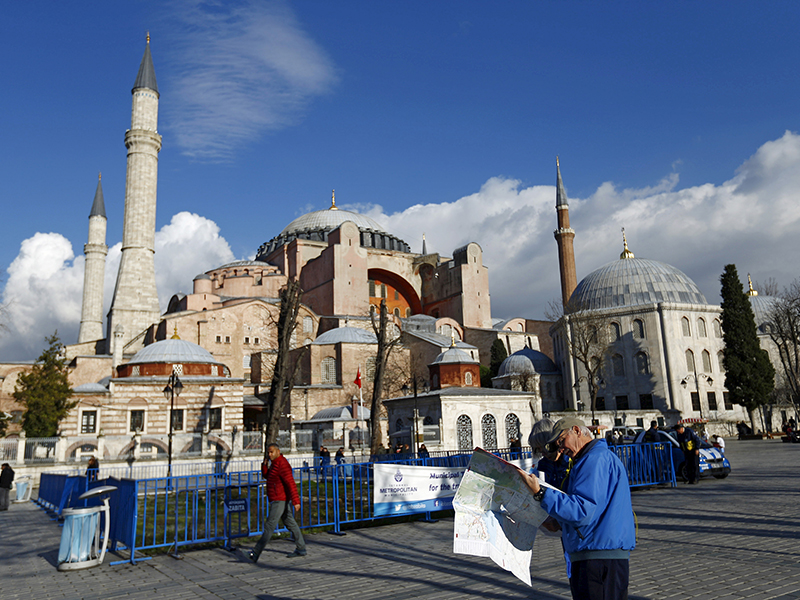 A tourist couple checks a map near the Byzantine-era monument of Hagia Sophia, at Sultanahmet Square in Istanbul, on Jan. 14, 2016. Photo courtesy of REUTERS/Murad Sezer
June 14, 2016
Lauren Markoe

(RNS) Turkish authorities have allowed Hagia Sophia, a World Heritage site, to be used for Ramadan prayers, an act that has enraged Orthodox Christians who say the famed former church and mosque is supposed to be off-limits for any religious ritual.

Prayers for the holy Muslim month were first read at the start of Ramadan on June 8, prompting a swift and pointed response.

"We condemn as regressive the Turkish authorities’ announcement of the scheduling of a Quran reading in Hagia Sophia in Istanbul, on the occasion of Ramadan," read a statement from the Greek Ministry of Foreign Affairs.

Turkish officials, in response, accused Greece of intolerance toward Muslims, but did not directly address the Hagia Sophia controversy.

"Greece has not given permission for the construction of a mosque in its capital for years, permanently intervenes in the freedoms of religion of the Turkish minority of Western Thrace and mistakes being against Islam for being modern," read a statement from the Turkish Ministry of Foreign Affairs.

Though neighboring Turkey and Greece are at peace, tensions persist. Orthodox Christianity is the predominant faith in Greece; Turkey is mostly Muslim.

Greece was once a part of the Ottoman Empire and Greeks and Turks have fought each other in four wars since the end of the 19th century.

Each culture has a claim on Hagia Sophia, one of Istanbul's most visited tourist attractions in a nation with both strong Muslim and secular traditions.

It was built in the sixth century as a cathedral of the Byzantine Empire, under the Christian Emperor Justinian I. In the 15th century, it became a mosque. Secular Turkish ruler Mustafa Kemal Attaturk transformed Hagia Sophia into a secular museum, and 50 years later UNESCO declared it a World Heritage site.

But Turkey's president, Recep Tayyip Erdogan, wants his country to embrace Islam more closely: The climate there is warmer now for those who want to make Hagia Sophia a mosque again.

The Greek ministry complained the prayers reveal a "lack of respect for and connection with reality."

"Such actions," the statement continued, "are not compatible with modern, democratic and secular societies."

According to the Turkish foreign ministry, Greece should be mindful that showing respect for other religions and their acts of worship is "among the values of modern, democratic and secular societies."