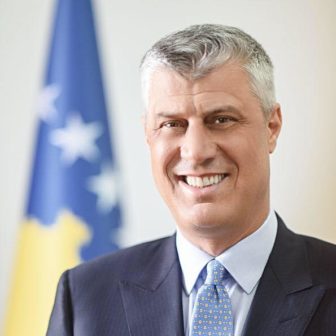 Hashim Thaci is the president of the Republic of Kosovo. Photo courtesy of Interfaith Kosovo

(RNS) Islamist extremism has become an increasingly deadly challenge for the Western world. A particularly unfortunate response can be seen in the rising influence of far right, isolationist and nativist political forces on both sides of the Atlantic.

The Western Balkans region is not spared from pessimistic soothsaying and rise of populist sentiment. Some Western media as well as political parties on the far right of the Western political landscape have raised alarm over the increased extremism in Bosnia, Albania and Kosovo.

We in the Balkans are not spared of local populist sentiment. In Kosovo, populist nationalists have used violence and tear gas to oppose the peace deals with our former foe Serbia. Macedonia has been in the grips of internal political turmoil for some time. Serbian political parties nostalgic for the policies of the Balkan Butcher, Slobodan Milosevic, have made significant gains in the Serbian parliament.

Yet we are also witnessing positive developments from the region, stemming from thoughtful diplomacy and the careful coordination of policies within and across countries. Though these seldom create news stories, they are transforming the lives of millions of people.

Here at home, Kosovo has managed to quash the danger of violent extremism lurking at the margins of our society. From around 300 Kosovars who were identified participating in the Syrian conflict on the side of ISIS and other extremist organizations, the number has now dropped to less than 60, the biggest such drop in Europe.

Our government believes that not a single Kosovar has joined ISIS in the last six to eight months.

While I served as a prime minister, Kosovo arrested 110 suspected extremists, with 67 indictments and 26 convictions secured so far. We are doing everything possible to ensure the security of our people and all who spend time in Kosovo. In Kosovo, while the majority of the population is Muslim, there are no burkas or niqabs on the streets, LGBT rallies take place each year, and we are incredibly proud that my predecessor as president was a woman.

Kosovo is also engaging informal diplomatic efforts to ensure that the Western Balkans can become a center for reconciliation and interfaith dialogue. Last week, two Nobel Peace Prize winners, Shirin Ebadi and Tawakkol Karman, spoke at our annual Interfaith Kosovo conference, with dignitaries and religious leaders from around the world. Earlier this year, we had the blessing of welcoming Prince Charles of the United Kingdom to speak about the role of public diplomacy and interfaith dialogue in safeguarding our future.

In addition, the entire Western Balkans is benefiting from closer ties to the North Atlantic Treaty Organization and the European Union. Montenegro will be joining NATO this year, which we welcome. Both Albania and Serbia have become official EU candidates, and pro-European forces enjoy big parliamentary majorities.

Yes, we are facing the challenge of extremism. But we are far from alone. As a share of the Muslim population, more citizens from Belgium, France, Sweden and the United Kingdom have traveled to fight with the so-called Islamic State.

The challenge of Islamist extremism is real and must be taken seriously. But I have also never been more optimistic about the Western Balkans and its future.

It is an optimism borne out by the important changes taking place at present and shrewd diplomacy intended to bring countries together that in earlier eras might never have believed that peaceful coexistence would be possible.

My presidency is dedicated to these cross-border, international efforts to shore up the bedrock of European civil society. This is the message that I will also deliver to His Holiness Pope Francis, when I meet him later this June. I wholeheartedly agree with his description of the identity of Europe as a “dynamic and multicultural identity.”

This is why I hope, even at this time of global uncertainty, we shall not overlook the many and significant points of light emerging within our region.

(Hashim Thaci is president of the Republic of Kosovo)