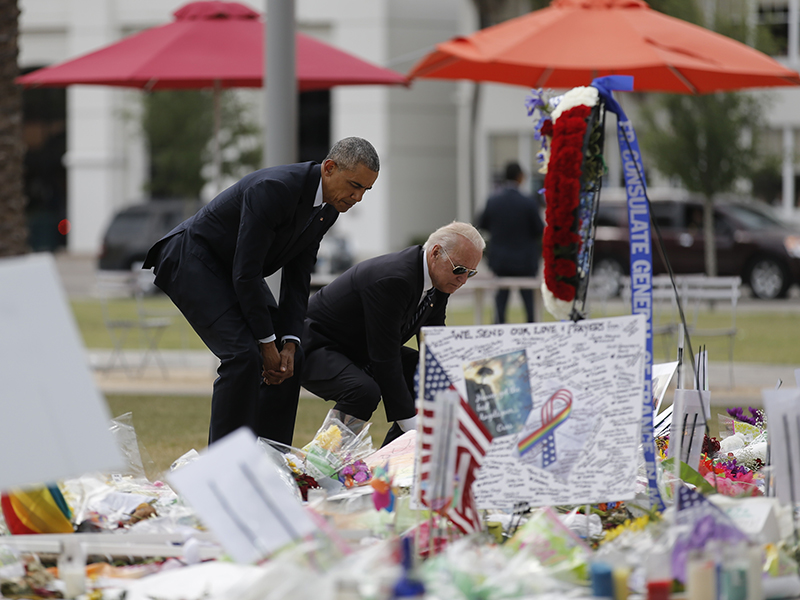 Obama renewed his call for gun control legislation after a series of emotional private meetings in Orlando with the families of victims of the worst shooting rampage in America in recent history. Law enforcement officials say Omar Mateen, a 29-year-old security guard apparently inspired by a mix of radical Islamic propaganda and anti-gay hatred, shot and killed 49 people at a gay nightclub early Sunday morning.

"Those who were killed and injured here were gunned down by a single killer with a powerful assault weapon," Obama said. "The motives of this killer may have been different than the mass killers in Aurora, or Newtown. But the instruments of death were so similar. Now another 49 innocent people are dead. Another 53 are injured. Some are still fighting for their lives. Some will have wounds that will last a lifetime."

Obama tried to acknowledge the complex mix of motivations and causes of the Orlando attack, but focused mostly on just one: guns.

Calling on the Senate to reconsider gun safety legislation defeated after the 2012 shooting of first graders at Sandy Hook Elementary School in Newtown, Conn., Obama challenged opponents of gun control to meet with the families of the Orlando victims. "They don't care about politics. Neither do I. Neither does Joe," he said, standing beside Vice President Biden.

"I truly hope that senators rise to the moment and do the right thing. We can stop some tragedies. We can save some lives. If we don't act, we will keep seeing more massacres like this," he said.

Obama noted the role of the so-called Islamic State, also known as ISIL, in inspiring and encouraging terror attacks. But said the last two attacks — in San Bernardino and Orlando — were conducted by "deranged individuals warped by the hateful propaganda that they had seen over the Internet."

"It’s going to take more than just our military." he said. "If you have lone wolf attacks like this, hatched in the minds of disturbed persons, then we’re going to have to take different kinds of steps to prevent something like this from happening."

Obama's remarks to reporters followed private meetings with victims, police officers, doctors and staff of the Pulse nightclub where the shooting happened Sunday.

"As you might imagine, their grief is beyond description," Obama said. "Through their pain and through their tears, they told us about the joy that their loved ones had brought to their lives."

Obama and placed 49 white roses at a memorial for the 49 victims at a performing arts center near Orlando City Hall.

"Our hearts are broken, too. We stand with you," Obama said. "We are here for you."

Obama and Biden then went to the Amway Center, an arena about two miles from Pulse, where an apparently self-radicalized security guard, Omar Mateen, opened fire early Sunday morning.

Outside, many residents gathered outside the Amway Center, hoping to catch a glimpse of the president or his motorcade.

"It shows the compassion in their hearts they have for the Americans in this great country. And we appreciate them being here," said Vinnie Cannady of the Carter Street Neighborhood Association, holding a small American flag while watching the motorcade arrive. "Unfortunately, a young man was totally confused about his identity and life. And selfish, to take innocent lives.

"But he will not stop the love in this great country," she said.

Obama has increasingly taken on the role of comforter-in-chief during his presidency, as mass shootings and terror attacks have brought him to communities like Newtown, Conn., Roseburg, Ore. and San Bernardino, Calif., where he's often met privately with victims of shooting attacks.

"This is a solemn responsibility," White House Press Secretary Josh Earnest said Wednesday. "This is a responsibility that's all the more important when you're talking about the way that the LGBT community in Orlando came under attack on Saturday. And signs of support and comfort from the president of the United States should be a powerful affirmation for those American citizens."