(RNS) If “The Gospel of Jesus’ Wife” sounds a bit like something out of a Dan Brown novel or an episode of “The X-Files,” that’s because, the Harvard scholar who introduced it to the world now admits, it likely is a fake.

That admission by Karen L. King, a professor at the Harvard Divinity School, comes after an investigation into the history of a papyrus fragment known as “The Gospel of Jesus’ Wife,” published last week by The Atlantic.

“It appears now that all the material [owner Walter] Fritz gave to me concerning the provenance of the papyrus … were fabrications,” King told the Boston Globe.

Harvard Divinity School posted a statement Monday (June 20) on its website from dean David N. Hempton, saying the school is “grateful to the many scholars, scientists, technicians, and journalists who have devoted their expertise to understanding the background and meaning of the papyrus fragment.

Video courtesy of The Atlantic

“HDS welcomes these contributions and will continue to treat the questions raised by them with all the seriousness they deserve,” Hempton said.

The scrap of papyrus reads in Coptic, an Egyptian language: “Jesus said to them, ‘My wife… .'” In total, it contains just 33 words across 14 lines. 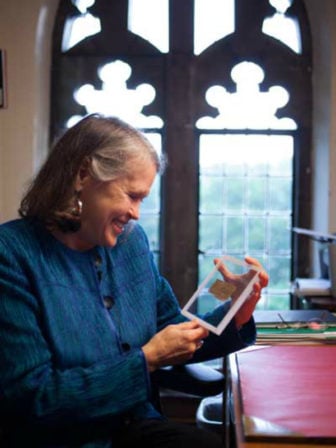 Karen L. King, the Hollis Professor of Divinity at Harvard University holds a previously unknown ancient papyrus fragment from Egypt that has four words written in Coptic that provide the first unequivocal evidence that within 150 years of his death, some followers of Jesus, believed him to have been married. RNS photo by Rose Lincoln/Harvard Staff Photographer

King had presented her research into the papyrus in 2012 at a Coptic Studies conference held near the Vatican, touching off new debate about whether Jesus had been married, the role of women in the early church — and the authenticity of the papyrus fragment.

Expert papyrologists and scientific tests had concluded it was likely authentic, she said, though critics pointed out errors in Coptic grammar and similarities with the extrabiblical Gospel of Thomas. The Vatican called it a “clumsy fake.”

The fragment had been brought to her by an anonymous collector, she said. In her paper at the time, she said, “nothing is known about the circumstances of its original discovery or early ownership.”

But The Atlantic traced its ownership to a Florida man named William Fritz, who had spent years at Free University’s Egyptology institute in Berlin and studied Coptic.

Fritz told The Atlantic he did not forge the papyrus. News
Campus chaplains, religious clubs advocate for students in a moment of anxiety

General story
Christian love in a time of coronavirus 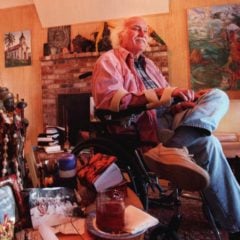 Faith
A spiritual icon to the Boomers, Ram Dass was godfather to the ‘nones’
Follow us on Facebook!
Submit your photos to RNS