WASHINGTON (RNS) Violent anti-Semitic attacks in the U.S. rose 50 percent last year. According to the Anti-Defamation League, there were a total of 56 against Jewish victims.

“And we know that for every incident reported, there’s likely another that goes unreported,” said Jonathan A. Greenblatt, CEO of the ADL, which produced the study and calls the trend “very concerning.”

The increase occurred as the total number of anti-Semitic incidents — including physical and verbal assaults and vandalism  — remained fairly steady, rising 3 percent from 2014. 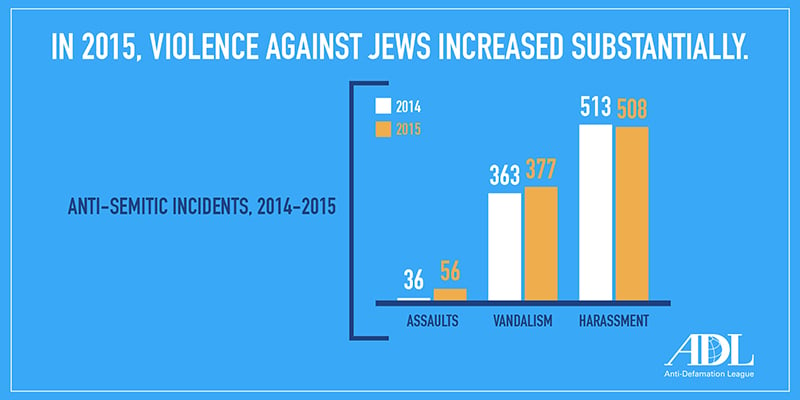 Examples of anti-Semitic assaults in 2015 include:

— An assailant in Boca Raton, Fla., shouted, “Jews should go back to Auschwitz” and struck a rabbinical student, who fell to the pavement.

— Two people walking home from synagogue in Brooklyn were pelted with eggs by four perpetrators shouting: “You f—— Jews. I am going to kill you.”

— Two assailants approached a high school student wearing a yarmulke in Denver and yelled, “Hey kike, when I talk to you, you talk back,” and threw a large rock that hit the victim on the back.

The peak since then was in 2006, when 1,554 incidents were reported. The general trend since then has been a decline. And as in past years, more anti-Semitic incidents occurred in states with larger Jewish populations. New York and California again led the list, followed by New Jersey, Florida and Massachusetts. 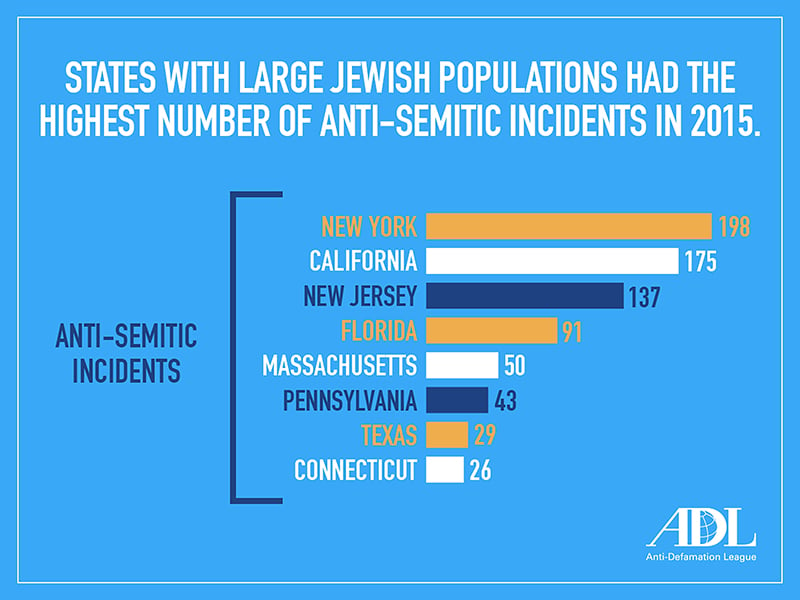 “States With Large Jewish Populations Had the Highest Number of Anti-Semitic Incidents in 2015.” Graphic courtesy of Anti-Defamation League

“The issue has grown exponentially in recent years because the internet provides racists and bigots with an outlet to reach a potential audience of millions,” Greenblatt said. The ADL in future years plan to capture in its report more online anti-Semitism, which researchers tracked with the rise in political expression this election season.

That finding dovetails with those of another recent report, which focuses entirely on the rise in anti-Semitism at American colleges and universities. A report from the Amcha Initiative blames supporters of the movement to boycott Israel as “the primary agents of antisemitic activity” on campuses. 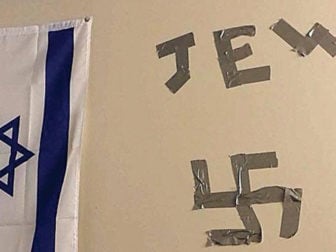 At Drexel University in 2015, someone used tape to write “Jew” and a swastika next to a student’s Israeli flag. Photo courtesy of Anti-Defamation League

Among the anti-Semitic incidents on American colleges and universities included in the ADL report:

— A student found a swastika and the word “Jew” taped next to his Israeli flag at Drexel University in Philadelphia.

— The phrase “Zionists should be sent to the gas chamber” was found in a campus restroom and another on a university-owned building at the University of California at Berkeley.

— Vandals spray-painted swastikas on the exterior wall of a Jewish fraternity at the University of California at Davis.

Anti-Semitism in Europe and the Middle East presents a yet larger problem, with anti-Semitism manifesting itself in more violence toward — and even the murders of — Jews.

READ: Anti-Semitism in Europe: ‘The devil that never dies’