KANSAS CITY, Mo. (RNS) A single chime rang out after each abuse victim’s statement was read over the speakers at the Cathedral of the Immaculate Conception in downtown Kansas City, a solemn echo to enduring pain.

It was a simple, symbolic gesture but one that had an almost inexpressible resonance for those who had been abused, and for many Catholics in a diocese so identified with clergy abuse that its last bishop was forced to resign.

“The pain was so intense, I did not want to live,” said one person in testimony from victims that was read out during the special liturgy of penitence on Sunday (June 26).

At the “Service of Lament” other readers voiced similar messages of pain, and also accusations at the church itself:

“When I was brave enough to tell you the truth, you chose to side with my abuser.”

“I had faith in my God, but you betrayed my faith.” 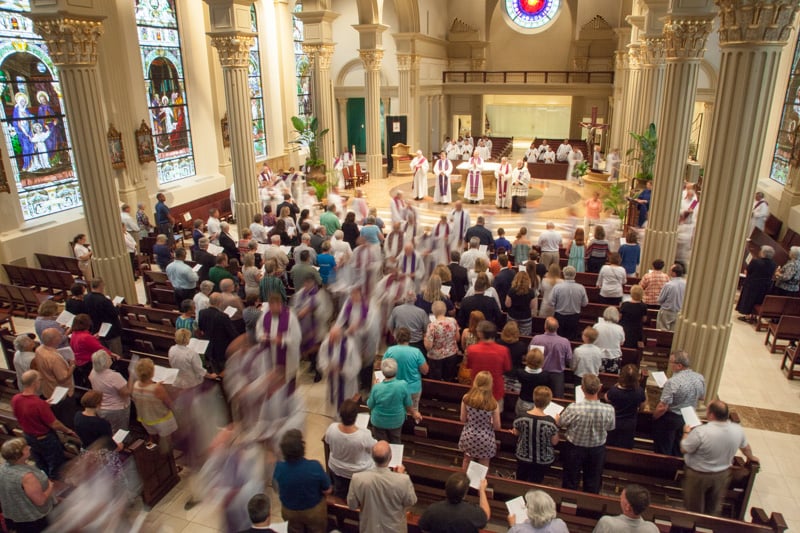 Priests and laymen exit the church after the “Service of Lament” at the Cathedral of the Immaculate Conception in downtown Kansas City, Mo., on June 26, 2016. RNS photo by Sally Morrow

Bishop James V. Johnston Jr., head of the Diocese of Kansas City-Saint Joseph since last November, was forthright in acknowledging those charges:

“I am here to confess, apologize and repent for the sins of those who held the sacred trust of the church, and betrayed that trust,” Johnston said as dozens of priests from around the diocese, all wearing purple stoles symbolizing penance, stood around the altar and prayed for the healing of children sexually abused by priests.

The bishop’s apology was directed toward not only survivors of abuse, but also their families, the community and innocent priests in the diocese who have been affected by the scandal. About 450 lay people attended the service.

Pope Francis accepted the resignation of Johnston’s predecessor, former Bishop Robert Finn, in April 2015, following reports of sexual abuse in the diocese and his failure to report the abuse and remove priests from their parishes.

After pleading guilty in 2012, Finn became the first U.S. bishop to be convicted in a criminal court of failing to report a suspected abuser and was sentenced to two years’ probation.

Johnston said the church’s betrayal began with “the innocent,” namely children who were sexually abused by priests, deacons or other church members.

“As sinful and terrible as this was and is, it is the response of the church that provides a most dire cause for confession. We at times failed to act, to respond with urgency and integrity. We betrayed your trust. I offer you my deep sorrow and profound regret for what the Catholic people have endured,” he said. Bishop James V. Johnston Jr. of the Kansas City-St. Joseph Diocese, prays during the “Service of Lament” at the Cathedral of the Immaculate Conception in downtown Kansas City, Mo., on June 26, 2016. RNS photo by Sally Morrow

Francis has taken unprecedented steps to try to hold bishops accountable for failing to report priests and protect children — though many victims advocates say much more must be done.

During the homily, Johnston also promised to install a visible, permanent reminder of the betrayal, with the help of a remembrance committee.

In addition, he declared an annual diocesan day of care for protection of children on April 26, beginning in 2017, and says he will create a team that will “review current policy and implement best practices.”

“For those seeking spiritual care, we will develop a program with people specially trained to serve as spiritual directors,” Johnston said.

“Please be patient as we embark on this journey together,” he asked. 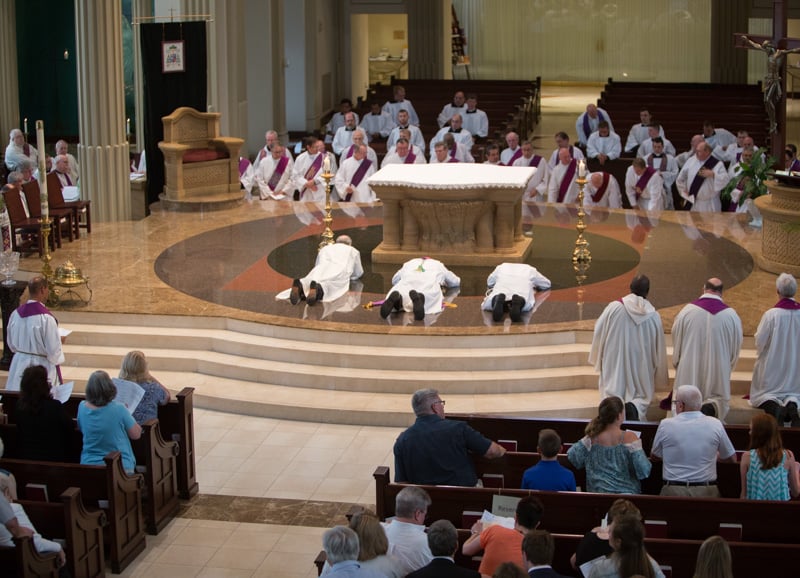 Bishop James V. Johnston Jr., center, lies prostrate facing the altar of the Cathedral of the Immaculate Conception in downtown Kansas City, Mo., during the Service of Lament, on June 26, 2016. RNS photo by Sally Morrow

The mood in the cathedral was quiet and meditative. A few people hugged and wiped away tears.

One survivor of abuse who attended the service said, “I was tore up all over again, but I felt it was handled very well.”

This survivor, who has spoken directly with the bishop over coffee, feels Johnston is genuine and willing to listen.

“He gets it,” the survivor said. “I thought he did a noble job.”

Although he commented that the lack of accountability in the past has been abysmal, the survivor called the service “monumental” and said it made a difference for him.

In regards to the Catholic faith, he said, “I got one foot out and one foot in. I’m still holding on with a tiny bit of hope, but my faith has been damaged repeatedly.”

Those in attendance were asked to write prayer requests on slips of paper and place them into a glass bowl, which will be kept in the diocese’s Office of Child and Youth Protection, which organized the service with input from firsthand survivors. 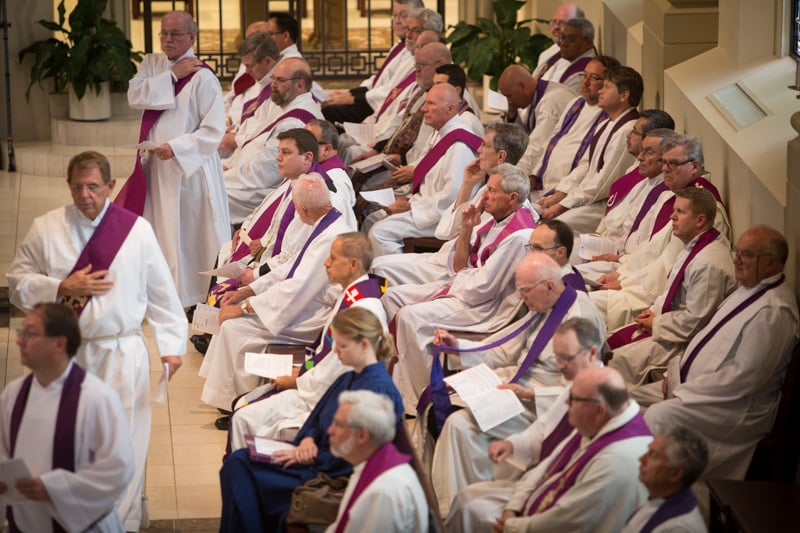 Priests submit prayers requests during the Service of Lament at the Cathedral of the Immaculate Conception in downtown Kansas City, Mo., on June 26, 2016. RNS photo by Sally Morrow

Concluding the liturgy, Johnston went off script, thanking the victims and acknowledging the bravery it must have taken to attend the service.

He admitted that he was more anxious about this service than he was when anticipating the day he was installed as bishop.

“I’m not sure why, I think it’s because I realized how important this is,” he said, while expressing fear of getting in the way of God’s intentions.

Johnston quoted St. Francis of Assisi, saying his prayer going forward is: “Lord, make me an instrument of your peace.”