(RNS) A South African cardinal who recently rejected calls for the Catholic Church to apologize to gay people has said the abortion rate among black women in the U.S. is “a genocide” and added: “Isn’t this something we should be apologizing for?”

In a series of tweets late Friday (July 1), Cardinal Wilfrid Napier of Durban cited Guttmacher Institute estimates that there have been more than 57 million abortions in the U.S. since the Supreme Court legalized abortion in 1973.

“Isn’t this something we should be apologizing for?” Napier, one of the more active tweeters in the College of Cardinals, wrote in the first of three tweets on the topic.

Napier then cited a statistic noting that black women have been the patients in about 31 percent of those abortions. He added: “That figure starts looking like a genocide when one factors in that Black women make up only 13 percent of total number of women in USA.”

“Isn’t that also something we should be apologizing for?” Napier wrote.

Napier was among those who deplored calls by some in the hierarchy who said, in the wake of last month’s shooting massacre at a gay nightclub in Orlando, that the Catholic Church should also examine its conscience and apologize for bias against gays and lesbians.

“God help us! Next we’ll have to apologize for teaching that adultery is a sin! Political Correctness (PC) is today’s major heresy!” Napier tweeted.

That was several days before Pope Francis told journalists that the church should ask forgiveness from gay people for the way it has treated them. 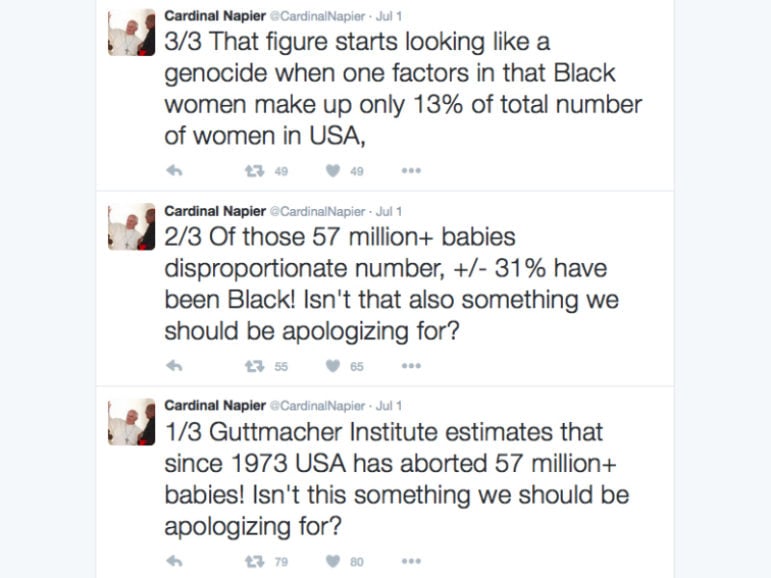