(RNS) Donald Trump has been married three times, spoken lewdly about his daughter’s body and doesn’t seem to know his Bible.

Yet evangelical voters are flocking to him.

A new poll from the Pew Research Center finds that 78 percent of white evangelical voters say they would vote for Trump if the election were held today, and a third of them say they “strongly” back him.

This support does not startle the pollsters. “It’s what we’ve seen consistently in past campaigns, that white evangelical Protestants tend to lean strongly toward the Republican candidate,” said Jessica Martinez, a Pew senior researcher.

But this evangelical support for Trump is even higher than that enjoyed at this point in the campaign by Mitt Romney, the 2012 GOP presidential nominee. 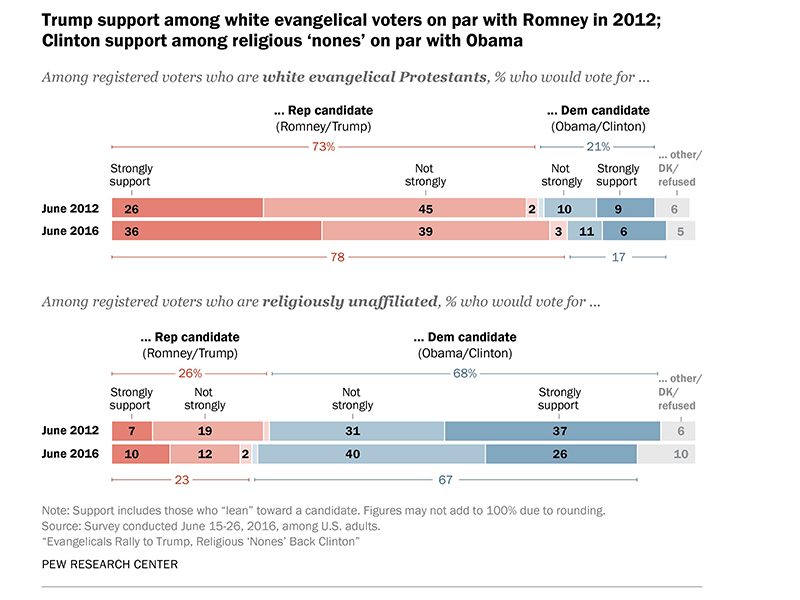 Evangelicals form a powerful voting bloc, accounting for a fifth of all voters and a third of those who identify or lean toward the GOP. But they could be balanced in the general election by another hefty group — the religiously unaffiliated or “nones.”

The nones make up more than a quarter of registered Democrats, and two-thirds (67 percent) say they would vote for presumptive Democratic presidential nominee Hillary Clinton, according to Pew.

“Religious ‘nones’ who favor Clinton divided between those who see their choice as mainly FOR Clinton, AGAINST Trump.” Graphic courtesy of Pew Research Center

Trump has worked hard to court evangelicals, scheduling campaign stops at churches and Liberty University, creating an evangelical advisory board and holding a summit in June with a cadre of evangelical leaders, one of whom emerged from the meeting asserting that Trump had just been “born again.”

But Trump has also been called out by some prominent evangelicals for his statements deriding women and minority groups, his brags about his wealth and offhanded claims to a religiosity that seems to contradict his resume and lifestyle.

“Nothing beats the Bible, not even ‘The Art of the Deal,'” he told a group of Republicans last summer, referring to the book he wrote on business negotiations. Then asked for a favorite Bible verse, he declined to come up with one.

A Pew poll released in January showed that a sizable minority of white evangelical Republicans do not consider Trump a pious man — 44 percent view him as “not too” or “not at all” religious.

“But at the same time many of them thought he could make a good or a great president,” Martinez said.

The current survey shows them preferring Trump by wide margins on almost every issue — from the economy to defending the nation from terror attacks to abortion. Despite the new poll’s favorable numbers for Trump on the evangelical vote, its authors point out that it does not so much reflect evangelicals’ confidence in the billionaire, as their distaste for Clinton. White evangelicals split 45 percent to 30 percent on whether their vote is anti-Clinton as opposed to pro-Trump.

The same holds true for Clinton among the nones, though by a lesser margin: 36 percent say they are voting against Trump as opposed to the 30 percent who are voting for Clinton. That contrasts with the nones’ support for President Obama at this time during the 2012 election cycle, when 50 percent of votes for Obama were pro-Obama as opposed to the 13 percent that were anti-Romney.

Other findings from the new Pew survey:

— Half of white mainline Protestants say they will vote for Trump, while 39 percent favor Clinton.