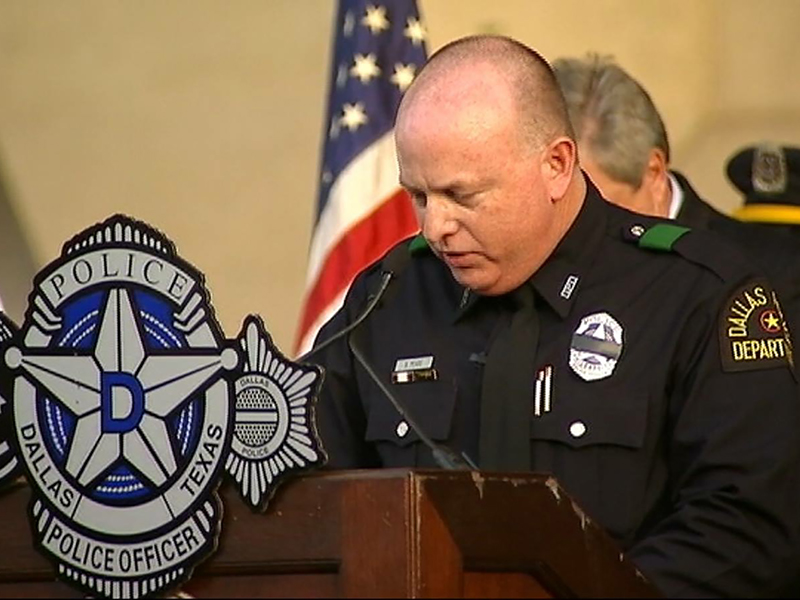 (RNS) Officer Sean Pease gave the opening and closing prayers at a vigil Monday (July 11) for Dallas police officers who were killed a week ago. A Southern Baptist minister for more than a decade, he is both a police officer and a chaplain with the Dallas Police Association. Pease, 48, a graduate of Southwestern Baptist Theological Seminary, talked with Religion News Service about what the last week has been like for him and other chaplains on the Dallas police force.

Q: Where were you when the shooting of police officers occurred?

A: It was my day off. My wife and and I went out to purchase a washer and dryer at an appliance store and her phone started blowing up first, and then mine, of people calling to check on me. And then we actually started looking at the news on our phones, saw what was going on, and then my sergeant called and told me I needed to report in.

Q: Have you been directly involved in the funerals for the officers?

A: No. I was sent to Parkland (Hospital) by my lieutenant that I normally work under as a street officer because he knows my background and it was one of our sergeants at our station that had been killed, and he wanted me there. I’ve also spent time outside of his house. We’ve had officers outside of all the different family members' houses, funeral home and the church as well. So other than that and the citywide memorial service, that’s the only thing I’ve been involved in right now.

Q: One of the jobs of a chaplain is to be there for civilians at the time of the death of a loved one. But how is it different to help police officers when one of their own is killed unexpectedly?

A: Going through the academy and still meeting people today, when they find out that I worked as a full-time vocational pastor previously to doing this job, they always make a comment about what a vast difference that is. And I correct them that it’s not really. Both roles you’re doing the best to help people that are in need. You’re answering important questions for people and you’re trying to bring them comfort and security.

That’s not really that different in what happened here in Dallas other than that fact of I’ve heard several people say it was like a gut punch as far as you’re trying to grasp reality at the same time as you’re trying to do that. You’re still trying to provide help to those that need it. 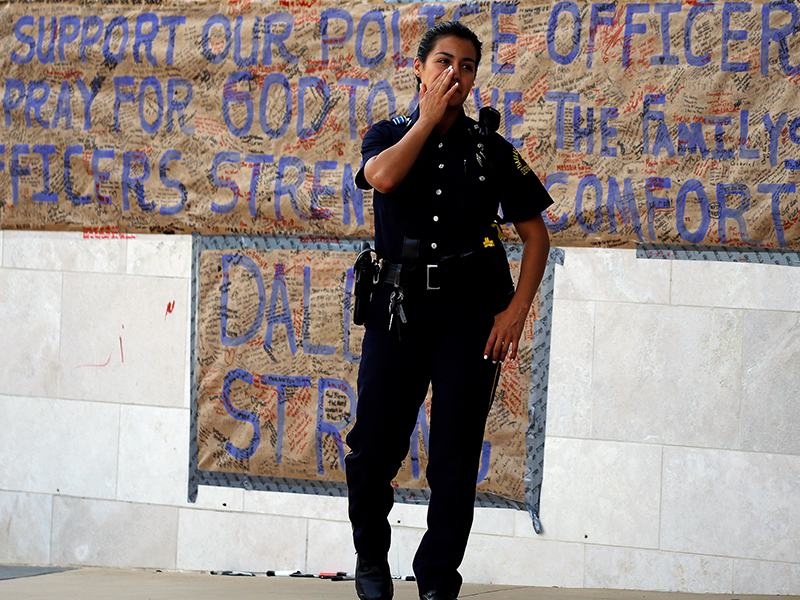 A Dallas police officer is pictured on July 11, 2016, at a makeshift memorial at police headquarters after the multiple police shootings in the city days earlier. Photo courtesy of REUTERS/Carlo Allegri

Q: What are the main questions that you’re being asked by police officers in Dallas right now?

A: I’ve already fielded a lot of phone calls from people I know, officers, that their difficulty right now is realizing that somebody that they saw every single day is not there anymore. And that’s the biggest thing, is to come to grips with that.

Q: In addition to the attacks on your officers, there was a protest in reaction to the deaths of African-Americans in St. Paul and Baton Rouge at the hands of police. Are you also getting questions about that or not?

A: Not really. We have gotten a few of the “you guys got what you deserved” comments and that’s just hard to hear and it’s hard to maintain the composure that we need to maintain to get the job done when somebody’s throwing that out there right at you.

Q: In general, are you hearing from more officers than usual? How does your workload compare to even a week ago?

A: Oh yeah, definitely hearing from a lot more. But the majority of my phone calls, text messages, meetings after detail are all from people that I regularly work with that have never really had any faith questions for me previously. This has brought that to the front of their minds.

Q: Is there a principal question they’re asking about faith?

A: I think it’s just dealing with what’s happening and more so, the why.

Q: Do you have an answer?

Well, that really is going to depend on where that person is, and their faith journey, as to what would be the most appropriate response. But more so it’s just helping them to be able to lay down at night and close their eyes and get some sleep without their thoughts running rampant on mortality: “Could I have done something different? Should I have done something different? Why was I off that night? I should have been there.” Those types of things.

Q: How does the police chaplain like you deal with his or her own grief?

A: It’s having family members and loved ones that you’re able to share that with.

Q: How does your faith play a role in this for you personally?

A: I thought several times of in (the New Testament book of) Romans where Paul writes about when we don’t know how to pray, sometimes it’s moans and groans but the Holy Spirit sends those up to the Lord on our behalf. And I think there’s a lot of that kind of praying going around. I don’t necessarily know what it is I’m praying for or if this is the right thing but we rely on the Spirit to translate that for us.

Q: What will happen when this is no longer in the headlines? What will the role of chaplains like you be weeks from now?

A: It’s my prayer that we’re still going to be answering questions from guys that do have some faith journey support that they need. That’s really what I’m hoping for.