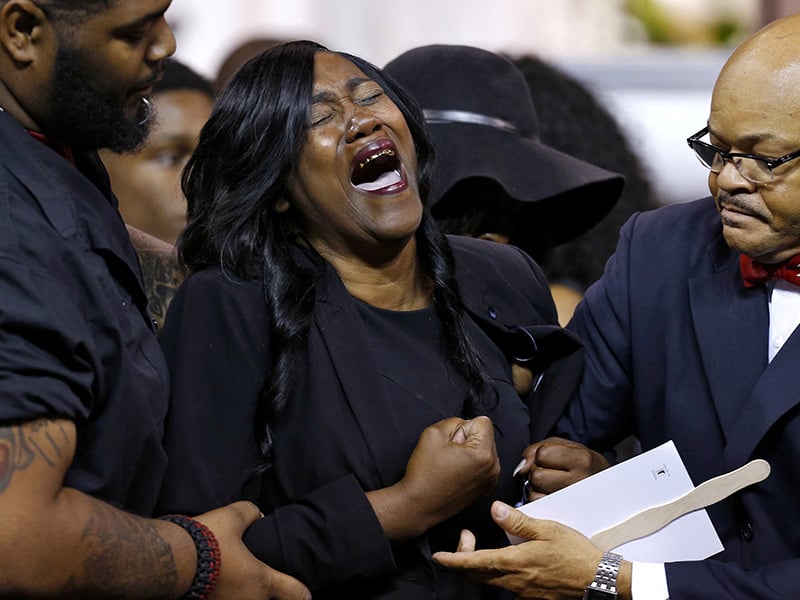 After the shooting by police officers of Alton Sterling -- whose funeral was Friday (July 15) -- I left Washington, D.C., to return to my hometown of Baton Rouge, La., where it happened.

There are a lot of things that can and have been said about the differences between black communities and white communities in Baton Rouge. What struck me the most that morning was one thing that they shared in common -- both services featured a baby dedication.

While University Baptist and New Life Missionary Baptist are located at opposite ends of the city, with their own distinct histories, it was clear to me that two questions seemed to hover over each congregation as we committed ourselves as people of faith to those infants:

“What sort of world are we inviting our children into?” and “What sort of faith will we be supporting them in?”

I don’t think there was a single person present at either of those services who wouldn’t want both of those children to grow up in a more peaceful and just world.

As a minister in the Baptist tradition, I’ve had the privilege of holding young lives in my arms and introducing them to a congregation. The dedication involves a commitment of support from the congregation where each person present affirms their intentions to love, to care for, to teach Jesus’ values to these children, and to lead them in the way of peacemaking.

However, if we want a peaceful community for these children to live in, then there must be peacemakers. We cannot simply shout “peace, peace” from the sidelines when there is no peace. We must run into the pain and chaos when others run away. Retreating from those places of tension might mean you avoid conflict but it doesn’t mean you are building peace.

When injustice has been present, tension is inevitable as truth comes to light. There is an old saying that “the truth might set you free, but first it will make you miserable.” The truth about race in America might make some people feel miserable but that is where we must start.

Alongside hundreds of others, I visited the site where Sterling was killed while being held on the ground by police, to pay homage and to mourn. Calling for peace, I joined thousands of others in the streets to demand the truth, to demand that justice be pursued.

As I talked to old friends, organizers and pastors, I realized that none of us were marching only because a 37-year-old African-American was killed. We were marching because when we saw that video of his life ending in the hands of police, we knew that it could have been us and confirmed things we hoped were not true.

It is a mistake to assume that thousands have poured into the streets because of one incident with the police. Thousands have poured into the streets because that video brought to the surface what people had experienced for so long, that their lives didn’t count the way other lives did. They have felt held on the ground by the institutions and people they have been told were there to help. The shooting catalyzed what was already there.

This video, and so many others that have appeared over the past few years, confirmed the fear that while the Constitution no longer reads that a black life only counts as three-fifths of a human, more than 150 years later, our culture hasn’t yet fully accepted that.

I’m a black Baptist minister who grew up in Baton Rouge in mostly black neighborhoods with mostly black friends but it was the mostly white University Baptist Church that my family called our spiritual home. I have no desire to take my white brothers and sisters on a “guilt trip” that ends only in shame. Instead, I would like them to receive Jesus’ blessings and invitation to be peacemakers and join in on the work of justice and dignity so that black lives can matter in our city, nation and world.

This is why I work with the New Baptist Covenant to build relationships between diverse churches that do the long, slow and hard work of addressing the disease of racism, not just its symptoms. Our work started long before the eye of the nation was focused on this fever. And to live up to the commitment I just made to support those two children, it will continue for years to come.

(The Rev. Elijah R. Zehyoue is an ordained Baptist minister and director of programs and communication at the New Baptist Covenant)