The comedic video sought to create sympathy for women navigating abortion restrictions while mocking democratically enacted laws that question the self-evident righteousness of abortion on demand.

Instead, the tasteless video, or ad, exposed pro-abortion ideology at its ethically weakest and intellectually feeblest.

Meant to parody a popular Jerry Seinfeld web series, “Comedians in Cars Getting Abortions” features a man and a woman hoping to visit a clinic for a convenient, hassle-free abortion. Along the way, they are thwarted by laws designed to restrict access through clinic regulations, waiting periods and information disclosures.

Unable to obtain an abortion after driving between sites and taking an ice cream break, the man drives the pregnant woman home as a voiceover laments: “It shouldn’t be this hard to get an abortion.”

The point is that anti-abortion forces are chipping away at abortion rights incrementally by limiting access to a legal medical procedure. And this is true, so far as it goes.

But the six-minute video’s message reveals the extremism and tone-deafness of pro-abortion rhetoric. Unable to abide any consideration of the fetus at all, NARAL portrays abortion as an easy fix for women who do not wish to “incubate a person.”

The female actor concludes, “It’s my choice, OK?” Then, seeing a father and his playful child, reassures herself by saying, “We don’t need more of this in the world.”

I used to hold considerable antipathy toward these centers. But as I got to know people who supported them, I came to accept their place in the front lines of our messy culture war over legal abortion.

Friends who volunteer at crisis pregnancy centers and support them financially have shown impressive compassion and kindness along with their rigid moral convictions.

The video was most tone-deaf when recognitions of the unborn child’s humanity were met with mockery and scorn.

In my adult life, I have supported a woman’s right to choose. Coming of age politically in the Clinton years, I resonated with the president’s argument that abortion should be “safe, legal and rare.” Safe for the woman, that is.

I do not want to live in a society where women die in back-alley abortions, are victimized by a dangerous black market and suffer the mental and physical scars of attempting the procedure themselves.

Public opinion is on my side. Americans are deeply ambivalent about abortion, with attitudes barely budging in the past 40 years. Considering how rapidly attitudes on same-sex marriage have shifted, it must be maddening to abortion proponents that anti-abortion attitudes remain so persistent.

But the activists and interest groups that control the Democratic and Republican parties grow more extreme every election cycle.

In 20 years, Republicans’ anti-abortion extremism has grown with the two-pronged strategy of ultimately seeking to overturn Roe v. Wade, but also enacting as many restrictions as possible in the meantime.

On the other side of the aisle, the Democratic Party speedily and enthusiastically adopts abortion-rights activists’ contention that there is no legitimate basis for moral concerns at all. In this view, legal abortion is a sacrosanct social good on which all female empowerment and liberation lies.

Americans know both sides are lying to them, but this new NARAL video unwittingly reveals the ethical vapidity of the pro-abortion movement with unusual clarity.

As Republicans and Democrats convene this month and pass ever more extreme platform planks on abortion, neither party speaks for me.

And thanks to NARAL’s offensive new video, my tenuous support for the logic and rhetoric of abortion defenders is weaker than ever.

I bet I am not the only one. 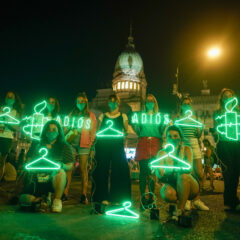