HAMBURG, Germany (RNS) In late 1945, after the end of World War II, Kurt Neumann began digging in his garden.

During the previous eight years, under the brown soil, a bunch of documents and photos had lain in repose. He scrubbed off the dirt and unspooled the documents from the oil paper preserving wrapped to protect them. He had survived the war and so had the founding papers of the city’s anti-religion, secularist movement.

His son, Konny Neumann, held up the images of the founding documents recently in a hard-bound green almanac. Hidden for years during Nazi rule, and brought out again in 1945, these helped resume the tradition of Jugendweihe. Konny Neumann is the head of the Hamburg branch of the Jugendweihe Deutschland, a body rooted in a distinctly secularist approach.

It has been 125 years since this group of anti-church, humanist thinkers established themselves in this port city, and in an increasingly irreligious country the tradition it promoted — akin to a confirmation ceremony without religion — is undergoing a rediscovery.

In April 350 teenagers in Hamburg dressed up and went to the ceremony, where they were formally pronounced as having graduated into the Jugendweihe. This was about 50 more than the previous year’s ceremony and more than triple the 100 students who went through the process 10 years ago. Milan Wessling, a 15-year-old from North Rhine-Westphalia, said it was something he wanted to do when he saw his friends having their Christian confirmations.

“To do this in a group with others and feel that I am a grown-up now was a good feeling,” he said.

“It was a step for him towards being grown up, taking responsibility, learning things,” added his mother, Elisabeth.

Children are usually between the ages of 14 and 18 when they sign up, and the process involves classes over a 20-week period before they formally graduate. The teens are taken on field visits and museum trips, taught ethics and social niceties and given a textbook covering the main topics: ethics, current affairs and climate change.

“The ones who come are interested in further educating themselves on the secular aspects of life,” said Neumann. That doesn’t mean they aren’t taught about religion; but it’s just one of the things in the curriculum, alongside the constitution, tolerance and evolution.

The updated textbook for Jugendweihe Deutschland now contains new chapters on the incomplete separation between church and state, the rise of right-wing fascism and modern media. “Human rights and the way to approach living: This is what they learn at our meetings,” said Neumann.

The ceremony takes place across the country, and at the Hamburg center enrollments for the next batch of teenagers, for whom classes will start in December, has just begun.

Around 50,000 children a year across the country go through the process, organized by various secular humanist groups, said Neumann.

The lion’s share — about 37,000 children — do it with Jugendweihe Deutschland, which has seen an increase of 900 over last year.

Though the total figure is less than what it was at the peak of the movement – during communist East German times — the recent increase comes at a time of membership decline in Germany’s Lutheran Church.

The history of the growth of secularism as an alternative to organized church religion — and not just as a form of atheism — in Germany is a long and winding one. Begun more than 150 years ago, the Jugendweihe was a way to educate and raise young people outside a religious tradition, a movement that faced persecution during Nazi times and later in the East German Republic — after a short period of having been forbidden — became a state-driven, communist anti-religious movement.

Disenchanted by the church and its excesses, in the 1850s a group describing itself as free thinkers decided to do something. “They wanted to educate the next generation in a liberal, undogmatic way,” said Neumann. “That was the beginning of it.”

Young people began to go to these meetings, learning about the possibility of a secular way of life. Strengthening itself during the Weimar Republic, later lying low during the Third Reich and then surviving through reunification, the practice has continued. In 1990, a nodal body – the Jugendweihe Deutschland – was formed and it operates in various branches across the country.

The Jugendweihe became a political tool during communist rule, but the organization has sought to be much more than just that. “The church hoped that more people would go back to the church after the reunification, but that didn’t happen. In fact, more people left,” said Neumann.

The church continues to lose believers, a trend attributed to the church tax deducted from a person’s annual income, which a person has to pay if he or she has been baptized.

For instance, about 2.13 million members are registered in the parishes of the Evangelical Lutheran Church in Northern Germany, also known as the North Church (as of April 1, 2015), and 20,759 teenagers were confirmed in 2014, but the church’s diminished role in society is all too evident. “Within the last decades we registered a decline of church members,” said Pastor Stefan Döbler, a spokesperson for the North Church, via email. “Not only our church is affected by that development. Some of the reasons are demographic aging, decline in the birth rates and more older people. Also people are leaving the church.”

This is itself broadly in keeping with the decline of the church throughout Europe, although he did point out that the number of volunteer workers at the church had increased.

However, the Jugendweihe isn’t a kind of anti-church outfit or a lifelong membership body, but rather a one-time event in a young person’s life. “Yes, I was very happy he did this,” said Wessling, of her son’s choice. “At this age it is good to do something like this.” 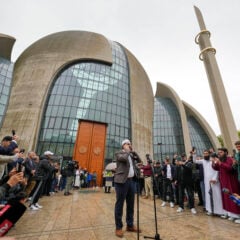