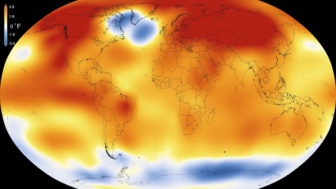 A year ago, Pope Francis issued the encyclical Laudato Si’, his clarion call for international action to address the existential crisis of climate change. Yesterday, the Democratic party signaled it’s with the program by approving a platform that recognizes climate change as “an urgent threat and a defining challenge of our time.”

Of greatest significance is a section on global threats that declares the United States must take the lead in “forging a robust global solution to the climate crisis.” Here’s what that means:

We are committed to a national mobilization, and to leading a global effort to mobilize nations to address this threat on a scale not seen since World War II. In the first 100 days of the next administration, the President will convene a summit of the world’s best engineers, climate scientists, policy experts, activists, and indigenous communities to chart a course to solve the climate crisis.

The contrast with the Republican platform could not be starker. That document calls the United Nations’ Intergovernmental Panel on Climate Change “a political mechanism, not an unbiased scientific institution.” It rejects “the agendas of both the Kyoto Protocol and the Paris Agreement.”

Opining that climate change “is far from this nation’s most pressing national security issue,” the Republicans pledge their support for “the development of all forms of energy that are marketable in a free economy without subsidies, including coal, oil, natural gas, nuclear power, and hydropower.” Without actually denying climate change, they have set forth a blueprint for doing nothing about it.

That’s not to say that the Democratic agenda doesn’t leave a good deal to be desired. It proposes to limit global warming to 1.5 degrees Celsius, a level that some climate scientists believe will have disastrous consequences and which in any event cannot be achieved if, as the platform proposes, 2050 is the target date for having the economy running entirely on clean energy and reducing greenhouse gas emissions by 80 percent.

The learning curve remains steep. That’s why the promise of a climate change summit during the first 100 days of the next administration is critical. With the right people at the table, this will provide the marching orders for the World War II-scale mobilization to come.

I’d advise President Clinton to put her vice president in charge of the summit. Tim Kaine’s environmental record is far from perfect, but as governor of a coal-mining state with an endangered low-lying coastline, he learned how to negotiate the politics of climate change as well as anyone in national politics.

Plus Kaine is a Pope Francis Catholic. I wouldn’t be at all surprised if he not only has Laudato Si’ on his shelf but has read it from cover to cover. And taken it to heart.