I’m not at the Sunstone symposium this weekend, so I missed Benjamin Knoll’s presentation yesterday with some really interesting stats on faith and doubt in the Mormon community, based on the Pew survey from a few years ago. But here’s a recap of the major findings – and if you’re interested, there’s a PDF of the whole report that you can download at the end of this post.

Ben, a political scientist at Centre College, knows from data. He has been an invaluable help to me in crafting The Next Mormons survey I’ve been talking so much about. (Speaking of which, if you are interested in donating to the Kickstarter campaign, TODAY is the last day! Click here if you’d like to support this research and get access to it before everybody else.)

For his presentation yesterday, Ben decided to take a deeper look at the existing Pew data from 2011 to determine what we can know about faith and doubt within Mormonism:

Who are the doubters? How many are there? Is this a large group or a small isolated set of a few hundred individuals who are active in the Mormon blogosphere? Just how different are doubters from TBMs (True Believing Mormons) in terms of their religious behavior and attitudes? 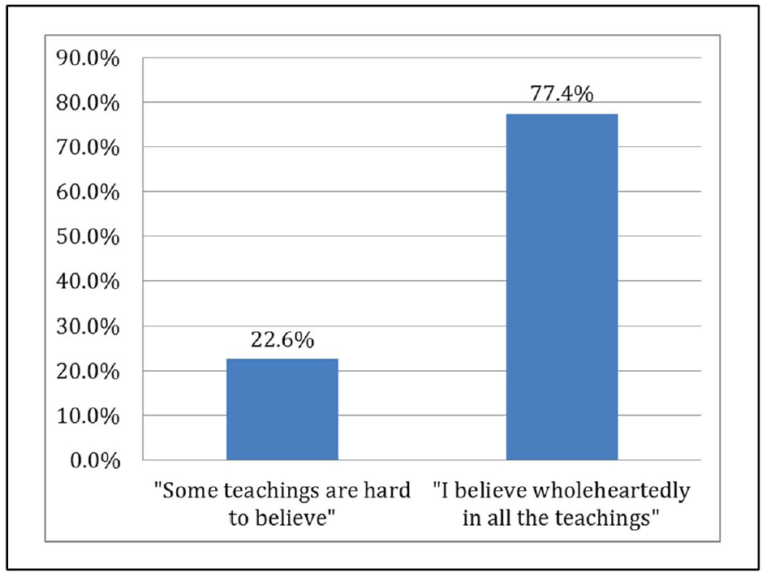 For starters, about 22% of those Mormons surveyed could be classified as “doubters” by Pew’s wording — meaning that they agreed with the statement “Some teachings are hard for me to believe.”

However, this number is a little misleading because the Pew survey already favors active Mormons. You know how at church, as many as two-thirds of the folks on the rolls rarely or never show up? Well, in the Pew survey most of those folks were not included in the sampling, because 85% of the respondents self-reported as being active in the church. We’re already going to be skewing toward belief here.

So the 22% rate is actually kind of low, given the sampling. What this means is that more Mormons than 22% have doubts—possibly a lot more. But a lot of those people have already stopped self-identifying as LDS.

What can we learn about doubters? 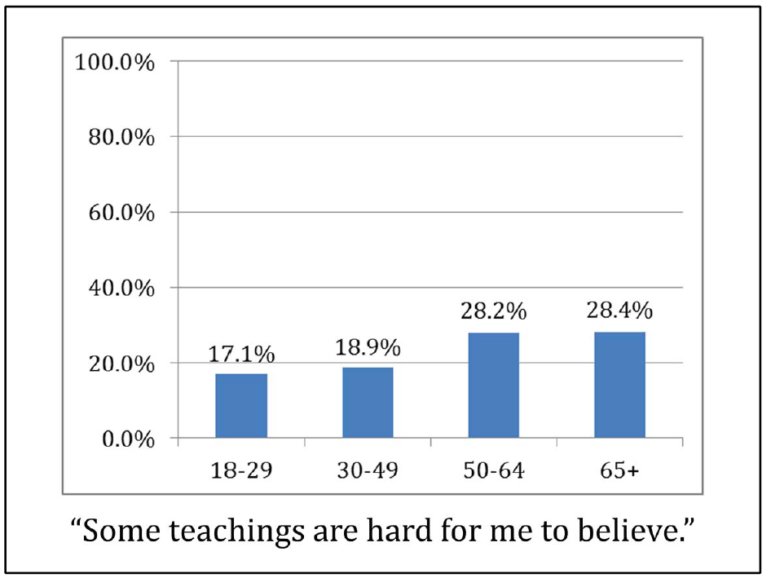 3. The less educated have more doubts. A third of people with a high school education or less are doubters (33.6%), while just over 12% of college graduates feel the same way. But again, that may be because the more educated people have already taken themselves out of the survey pool of self-identified Mormons. As Ben puts it, “The popular narrative is that those who are well‐educated tend to ‘intellectualize’ themselves and have more doubts. But they have already left and so are not included in this analysis. Of those who currently identify, those with more education report lower levels of doubt than those with less education.”

4. Democrats are more likely to doubt than Republicans, but Independents—and especially Independents who lean Democratic—are the most likely of all. I would love to know why this is so. Maybe there is a strain among doubters that questions all institutions, including political ones like parties?

5. Converts are more likely to doubt than those raised LDS. So much for the proverbial zeal of the convert! Speaking as a convert myself, it has occurred to me many times how much easier it would be to accept some of our propositional statements if you were raised on them. It’s a lot harder to come in as an adult and say, “Well, of course the Garden of Eden was in Missouri. I was thinking that all along.”

6. It doesn’t really matter where you live. Utah residents in the survey were only slightly less likely to doubt than people who lived in other parts of the United States. This is another nail in the coffin of the “Utah folks are way more orthodox than Mormons everywhere else” theory.

7. People who make more than $100,000 a year are more likely to doubt. Unlike the education effect, which turned out to be the opposite of what you might expect, this old chestnut held true: there is a correlation between high income and doubt. As Ben joked, “the Book of Mormon ‘pride cycle’ appears to be confirmed.”