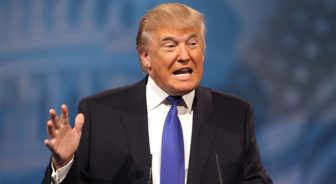 Reading theologian Wayne Grudem’s article, “Why voting for Donald Trump is a morally good choice,” felt like watching a Jell-O throwing contest. For approximately 5,000 words, Grudem tosses handfuls of disparate arguments at a proverbial wall in an effort to make a conservative Christian case for Donald Trump.

I disagreed with many of his arguments, but I applaud Grudem for his chutzpah. It’s an admittedly difficult task for a pietistic evangelical to make a principled, Christian case for an arrogant, foul-mouthed, thrice-married, misogynistic businessman who made millions from the gambling industry, has bragged repeatedly about his sexual encounters, threatens to kill the families of his enemies, and once graced the cover of Playboy magazine.

His thesis is that “there is nothing morally wrong with voting for a flawed candidate if you think he will do more good for the nation than his opponent. In fact, it is the morally right thing to do.” But throughout the article, Grudem’s arguments clash with Grudem’s arguments. For example, he claims that Trump is merely a “flawed” person who “blurts out mistaken ideas (such as bombing the families of terrorists) that he later must abandon,” while Clinton is evil and voting for her is sinful:

This year we have an unusual opportunity to defeat Hillary Clinton and the pro-abortion, pro-gender-confusion, anti-religious liberty, tax-and-spend, big government liberalism that she champions. I believe that defeating that kind of liberalism would be a morally right action. Therefore I feel the force of the words of James: “Whoever knows the right thing to do and fails to do it, for him it is sin” (James 4:17).

When the article concluded, I found myself chewing on a different question than the one posed by the article. I wasn’t pondering whether Donald Trump was a “morally good choice.” I was left wondering which field Wayne Grudem thinks he is an expert in, exactly. Theology or public policy? From where I’m sitting, it’s difficult to tell.

Wayne Grudem wrote the book on systematic theology. Literally. His nearly 1300-page Systematic Theology: An Introduction to Biblical Doctrine is required reading among some conservative Protestants. Recently, however, the theologian decided to become a political scientist.  In 2010, he published a political textbook that was a 624-page mishmash of theology, political theory, and public policy discussions.

The book was a junk drawer of political issues. It argued that “a school voucher system should be adopted by every school district” and why appointing “originalist” judges is today’s most important issue. Grudem argued detailed positions on private property, social security system, the internal revenue service, automobile CAFE standards, the CIA, the Fairness Doctrine, nuclear weapons, farm subsidies, liberal media bias, and “the best cure for recessions.”

It was a stunning picture of an expert in a specific field who, on a dime, decided he was an expert in another field. Can one be an authority on how salvation works and how social security works? Can one be a thought leader on the Trinity and the United Nations, on modern gun control and ancient Greek? It’s possible, I suppose, but unlikely.

This kind of behavior, I have noticed, is particularly endemic among conservative Christians. If you’re a pastor or theologian, evangelicals seem to believe you’re somehow qualified to do almost anything. In this world, a pastor can become the principal of a private school (with no background in education). They become an editor at a book publisher (with no background in writing). They can even run a multimillion-dollar financial investment company (with no formal education or experience in finance).

I once debated a Christian leader at a university in South Carolina. In his opening remarks, he argued detailed positions on economics, politics, theology (including the proper interpretation of certain Greek and Hebrew words), and science. I decided to skip my opening remarks and ask a question instead: “You’ve presented yourself as an expert in at least four distinct fields. For the sake of our conversation, can you please tell us exactly which field you’re an expert in?” My opponent laughed me off, but the question was quite serious.

There is nothing wrong, of course, with a theologian or pastor or automobile mechanic or anyone else offering their opinion on a political issue or candidate. No one is restricted to speaking about a single topic or field of topics. And it’s important to have interdisciplinary conversations. But Grudem’s article makes no space for uncertainty, no room for dissent, and uses definitive, dogmatic language.

So I think there is a lesson here for all of us, whether you’re a theologian like Wayne Grudem or a religion columnist like me. We must all work hard to infuse our work and words with integrity. We need to admit when there’s ambiguity. We need to resist the temptation to speak authoritatively on every detail of every matter. After all, the person who attempts to become an expert in everything often ends up an expert in nothing at all.