In a press conference on the papal flight returning from World Youth Day in Poland late Sunday (July 31), the pontiff said the allegations against Pell “are in the hands of the justice system” and the cardinal should not be judged “before the justice system judges.”

“If I were to make a judgment in favor or against Cardinal Pell that would not be good because I would be making a judgment first,” said the pope.

Pell, an Australian cardinal who as the Holy See’s finance chief is third in the Vatican hierarchy after Pope Francis and Secretary of State Pietro Parolin. He is the most senior figure in the Catholic Church to be accused of sexually abusing minors.

He has emphatically rejected claims that he inappropriately touched children when he was a priest many years ago.

“The allegations are untrue. I deny them absolutely,” 75-year-old Pell said in Rome Thursday.

Responding to a question about whether he was considering any action, the pope said there should be no “premature judgment.”

“There is doubt and there is that clear principle of law: in doubt, ‘pro reo,'” said Francis, referring to the Latin expression saying a defendant cannot be convicted if there is any doubt about his guilt.

“We must wait for the justice system and not make a premature judgment, a judgment in the media, because this does not help,” Francis said.

“Once justice has spoken, I will speak.”

The claims against Pell are an important test case for the pope as he has vowed zero tolerance for sexual abuse in the Catholic Church and said he would sack bishops found guilty of committing abuse or covering it up. 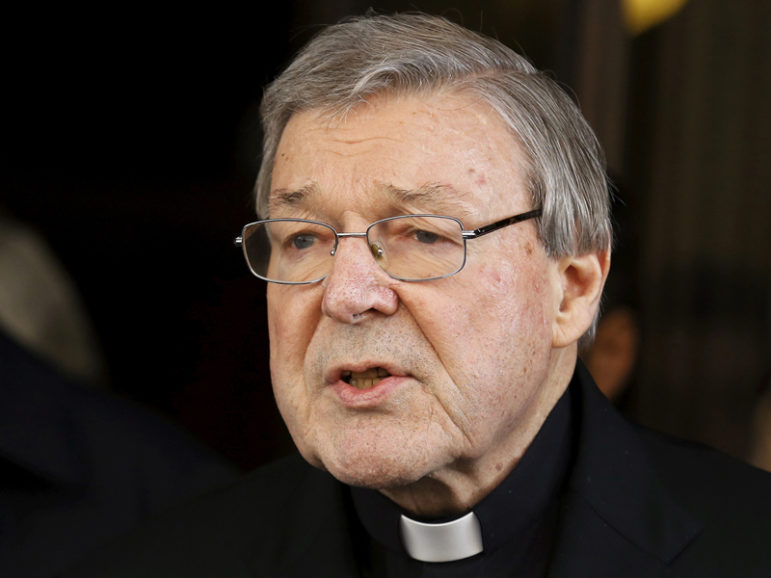 Australian Cardinal George Pell speaks to journalists at the end of a meeting with sex abuse victims at the Quirinale hotel in Rome on March 3, 2016. Photo courtesy of REUTERS/Alessandro Bianchi/File Photo

Last week an Australian TV report said police in the state of Victoria were investigating claims that Pell had touched boys inappropriately in a swimming pool in the 1970s and appeared naked before other boys at a surf club locker room in the late 1980s.

“Untested allegations should be put through the proper procedures,” Pell said Thursday. “I’m quite prepared to cooperate … I won’t cooperate with trial by the media. I think it’s unjust and inappropriate.”

Pell, the former archbishop of Sydney, was cleared of a previous allegation that he had abused a 12-year-old boy at a camp in the 1960s after an internal investigation by the Catholic Church.

During the press conference Francis responded to questions about Poland, the recent political coup in Turkey and whether the Vatican may play a greater role in mediating the political crisis in Venezuela.

He also returned to the theme of Islam and violence, which he had discussed on the way to Poland in the immediate aftermath of the brutal slaying of an elderly priest in France who was killed while saying Mass by two 19-year-old Muslim men.

On Sunday, thousands of Muslims attended Mass in Catholic churches in France and Italy as a sign of interfaith solidarity.

Francis again told reporters that it was “neither just or true to speak of violent Islam and Islamic terrorism.”

“In every religion there are small groups of fundamentalists,” the pope said.

“I do not like to speak of Islamic violence, because every day when you read the newspapers you see violence,” Francis said, referring to Italy where there have been recent incidences of men murdering their wives, girlfriends or ex-partners.