WASHINGTON (RNS) The U.S. State Department warned that religion-based terrorists as well as some governments across the globe are threatening the liberties of religious minorities.

“One of the best ways to deny these murderers their victory is by ensuring that those they have sought to destroy not only survive, but thrive,” said Deputy Secretary of State Antony Blinken, announcing the 2015 Annual Report on International Religious Freedom on Tuesday (Aug. 10).

Though the report has often focused on serious violations of religious freedom by governments across the globe, Blinken said it also details the “major threat” by groups like Daesh (or the Islamic State group), al-Qaida, al-Shabab and Boko Haram.

“There is, after all, no more egregious form of discrimination than separating out the followers of one religion from another — whether in a village, on a bus, in a classroom — with the intent of murdering or enslaving the members of a particular group,” he said.

The document, in its 18th year, includes details of how almost 200 countries are faring in protecting the religious liberty of their citizens. 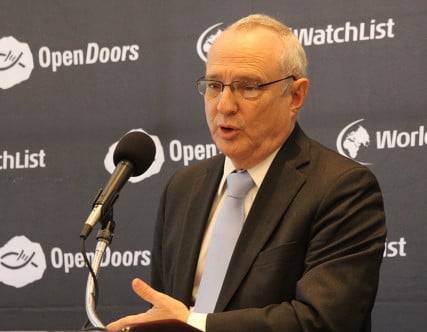 He highlighted the report’s emphasis on laws around the globe about blasphemy and apostasy: “No one region, country or religion is immune to the pernicious effects of such legislation.”

The report notes that people are imprisoned with death sentences in Mauritania and Pakistan for allegedly criticizing the Prophet Muhammad or desecrating the Quran, while Saudi Arabia has overturned a poet’s death sentence for apostasy charges but he was instead sentenced to eight years in prison and 800 lashes.

Saperstein cited the example of a boy who was playing soccer in Syria, “said a bad word out of his frustration” and was detained by the Islamic State for cursing God.

“In a matter of days he was marched out into a public square and murdered by a firing squad in front of a crowd of hundreds, including his parents,” said Saperstein. “Chilling stories like this show how terrorist organizations have committed by far some of the most egregious abuses when claiming individuals have engaged in apostasy, blasphemy or cursing God.”

State actions based on blasphemy charges include Iran’s executions of prisoners of conscience for their beliefs, Pakistan’s arrests of Muslims and Christians and the fining of an avowed atheist in Muenster, Germany, for bumper stickers that challenged Catholic beliefs.

Saperstein, who has visited 25 countries in the year and a half he has held his State Department role, said the U.S. is working with governments and other organizations to press for changes in the laws. He cited Iceland’s dropping of its blasphemy law last year as a model for others.

But he also credited those outside government for taking action to fight blasphemy laws as well as working to protect religious minorities in other ways. He praised groups, including Muslims youths, who formed human rings around synagogues facing anti-Semitic threats and Muslims who attended Masses in France in solidarity with their communities after the recent beheading of a Catholic priest.