RIO DE JANEIRO (RNS) When Mother Fatima Damas discovered her African-Brazilian religious beliefs would not be represented in the interfaith rooms of the Olympic Village, she was so incensed she launched a campaign to overturn the controversial exclusion.

“We may not have millions of followers but our faith matters here in our country, and this showed a lack of respect,” said Damas, president of Brazil’s Umbanda Spiritualist Congregation. 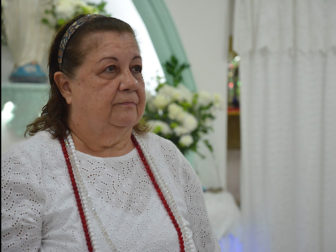 When Mother Fatima Damas discovered her African-Brazilian religious beliefs would not be represented in the interfaith rooms of the Olympic Village, she was so incensed she launched a campaign to overturn the controversial exclusion. Photo courtesy of Foto News Agency

The International Olympic Committee had chosen only five “official” religions for the interfaith center. According to the Rio 2016 Olympic organizing committee, the choice of Christianity, Islam, Judaism, Buddhism and Hinduism was based on IOC research that showed most athletes follow those faiths.

But the IOC found itself facing heavy criticism for failing to consider the possibility that some Brazilian competitors could be Candomble and Umbanda adherents and in need of pastoral support as well.

Damas and other Brazilian-African religious leaders lobbied the government to overturn the decision.

“We were even preparing a lawsuit against the IOC to force them to include us,” she said. The exclusion was eventually dropped.

READ: Faith at the Olympics: Does it give an athlete an edge?

Both Candomble and Umbanda are a fusion of different beliefs and multiple deities. The faiths are rooted in African spiritual traditions with elements blended from Roman Catholicism.

Brazil has more than 58,800 followers of African religions, and a significant number are concentrated in the state of Rio de Janeiro.

Damas, who is also the founder of the Commission for Combating Religious Intolerance, took the complaint to civil rights lawyers at Rio’s Federal Public Ministry and consulted the Union of Public Defense about her legal rights to challenge the IOC’s decision.

She was supported by impassioned reports in the press that helped to raise the profile of the issue, accusing the IOC of discrimination and questioning the wisdom of the omission.

“It doesn’t matter how many people follow a particular religion,” Damas said. “You either represent all religions or none at all. This exclusion (threatened to) reinforce the prejudice against beliefs that are already marginalized.”

Lawyers for the Federal Public Ministry argued that the IOC needed to reflect the religious demographics of the Olympics host country. Any other decision would “undermine” the spirit of the competition.

Civil rights lawyer Renato Machado explained that these religions are “part of the identity of the country” and that the African-Brazilian religions should receive equal treatment.

In addition, Brazilian law provides that African-based religious practices are ensured proportional participation on commissions, boards, agencies and other decision-making activities linked to the government.

With just days to go before the opening of the Summer Games, the IOC agreed to extend accreditation to all religions.

“It would have been a lost opportunity if we had failed to use an event of such importance as the Olympics to correct this issue,” Damas said. 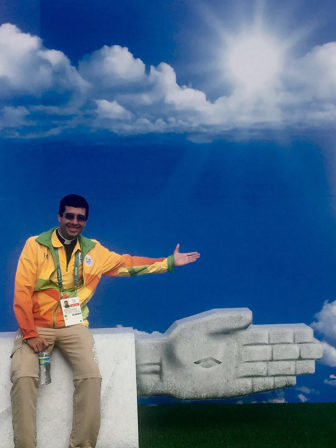 The Rev. Leandro Lenin is the coordinator of the Olympics Village interfaith center. Photo courtesy of Foto News Agency

The Rev. Leandro Lenin, the coordinator of the interfaith center, recently visited all 31 buildings in the Olympic village and posted information on notice boards about the center and the availability of various religious leaders to give counsel and comfort to the 17,000 athletes, coaches and other support staff.

“Whatever faith they follow, athletes competing in the Rio Olympic and Paralympic Games will always find a place to worship in the village,” he said.

So far, no one has taken up the offer to see a Candomble or Umbanda priest, Lenin said. But if adherents come forward, they would be entitled to hold a worship service in one of the five rooms allocated to the faiths.

“All the rooms are decorated with the appropriate religious objects, like candles, altars, mats, bells, Bibles, the Quran, icons and posters,” said Lenin. “All these artifacts and holy objects can be removed if the room needs to be shared with another religion.”

Among the religious leaders on call at the center, which is open from 7 a.m. to 10 p.m., every day through Sept. 21: Rabbi Elia Haber; Buddhist monk Jyun Sho Yoshikawa; Muslim theologian Jihad Hammadeh; and Raga Bhumi Devi Dasi, a pioneer of the Hare Krishna movement in Brazil.

“This is a time of joy for some, sadness for others, reflection and questioning for many,” Lenin said. “There are athletes who are rejoicing at their success and others who need an understanding and friendly shoulder to cry on.”

So far, the center has already seen a steady stream of people seeking spiritual guidance and attending services.

“In one day I held over six services,” said Lenin.

The five rooms can hold up to 80 people each and there is no limit on how many meetings can be held each day. The busiest days so far have been Fridays, Saturdays and Sundays as these are the holy days of the Muslim, Jewish and Christian religions respectively.

Babalawo Ivanir dos Santos, a Candomble priest and representative of Brazil’s African-origin religions, said the religious diversity in the athletes’ village gives “us the opportunity to show solidarity and religious tolerance.”

“We have done the correct thing in Brazil by including all faiths in the center,” he said.  “Now it is time to send a signal to the world to show that persecution and intolerance of different faiths has no place in our society.” 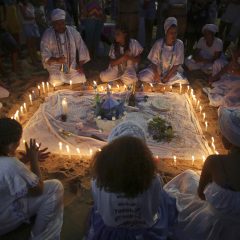 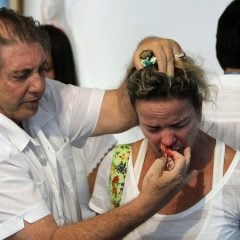