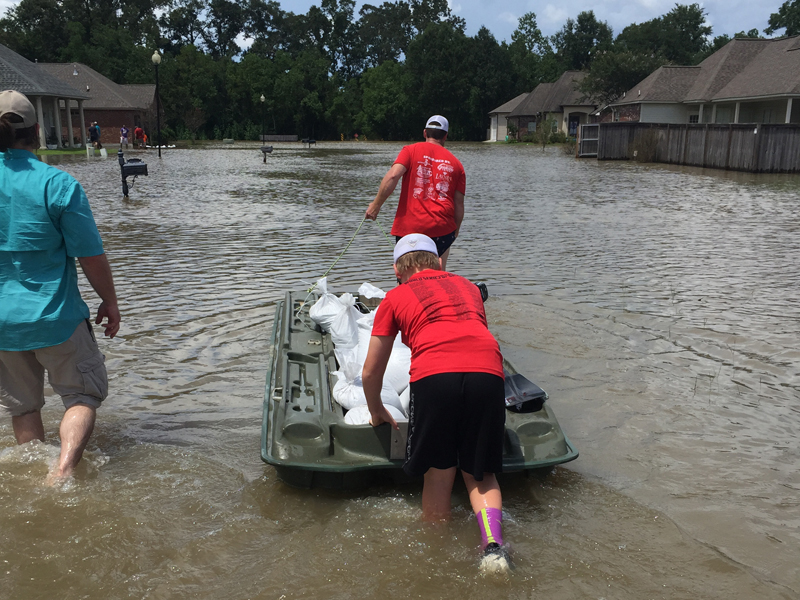 DENHAM SPRINGS, La. (RNS) Louisiana has a tenuous relationship with water. Surrounded by it, from the Gulf of Mexico to lakes, rivers and bayous, Louisiana enjoys a culture  based on the fishing, boating, shipping and drilling that happen in and around the water. While the water is usually a blessing, sometimes it rises up and brings disaster. The past 10 days of flooding in South Louisiana have provided one water-oriented disaster after another, but something else has emerged yet again: the faith, resilience and perseverance of this people.

While much of America over the past week was focused on Trump vs. Hillary or Ryan Lochte and crew in Brazil, South Louisiana was drowning, almost unnoticed, from severe floods. But local churches sprang into action and became places of refuge with resources to share as those who could help others did. I have seen this response over and over again, from Hurricane Katrina to the Haiti earthquake to the Alabama tornadoes in 2011. Churches, big and small, mobilize quickly to help their neighbors and also those they don’t know with aid, food, a helping hand and lots of sacrificial love. In doing so, they are following the way of Jesus.

Troubled by the lack of media coverage, I traveled to Louisiana last Friday from my home in Montgomery, Ala., to assess what had happened so the association of churches that I work with as a missional strategist could help. I am from Louisiana and I grew up right across the state line in Mississippi, so I know the area well. I wanted to find ways for churches in Alabama to connect with churches in Louisiana that were making a difference.

Everywhere I went across four parishes (East Baton Rouge, Livingston, Ascension and Tangipahoa), people were working hard, even though they were exhausted and grieving at the loss. Homes were flooded everywhere. Water had risen to 6 feet or more in places -- in some cases all the way to the roofs. Floodwaters had still not abated in places like Ascension Parish, but people were not giving up or waiting for help. They were tearing out drywall and pulling out carpet and everything else they could get out of the house. Mounds of their earthly possessions and interiors of their homes were lining the streets in neighborhoods like canyons rising above muddy yards. The 95-degree heat hitting the wet, soggy piles created a smell of mold and rot that was overwhelming. People, wearing masks and gloves and boots, were working -- and working and working.

Saturday, I joined in helping a family in Denham Springs who lost everything when the floodwaters rose through their home the week before. Sandy Harrell had lived there with her husband and family since 1975. Most of the homes in these areas did not have flood insurance. That isn’t because homeowners were negligent. It is because they lived in areas that had never flooded and they were told they didn’t need it. Sandy’s family was ripping everything out of her home and piling it on the street. They were “hard pressed, but not crushed; perplexed, but not in despair” (2 Corinthians 4:8-9). Before we left, we prayed together in the midst of all of the ruin and we thanked God for his grace and provision.

Sunday, I drove to Prairieville, La., in Ascension Parish and went to Fellowship Church. The church had been serving as a distribution site for supplies and food for needy families and had been sending out teams to help with rescue and relief work and with mudding out homes. Pastor Kirk Jones preached a stirring message on the Beatitudes and applied it to the kind of attitude that his listeners needed to have when everything was falling apart and loss was all around them. The service ended, and members went to work setting up the distribution center again, sending out teams to help needy families and delivering hundreds of meals across the parish. Before the volunteers left, the rains came again -- in sheets and buckets, with more water filling the streets.

This what I saw all over the four parishes. Neighbor helping neighbor and churches opening their doors and sending people out into the waters to help those in need. With the racial conflicts in Baton Rouge after the Alton Sterling killing in early July, the perspective of the nation about racial division in the area was clear: Baton Rouge seemed a city divided. But when the floodwaters came, those divisions were, at least temporarily, washed away. Instead of division and animosity, there were just neighbors helping one another. No one here is talking about racial strife right now. They are just working together trying to save what they can.

As I talked with residents, they urged me to let people outside Louisiana know what they are going through and ask them to send help. From Brian Robert, the family pastor tasked with disaster relief coordination at Fellowship Church, to the Louisiana State University and Southern University Baptist college students I met digging out homes, to families everywhere in need, the plea was the same: “Don’t let us be forgotten here. We’re working hard, but we’re getting tired. We need help.”

(Alan Cross is executive director of Community Development Initiatives and author of “When Heaven and Earth Collide: Racism, Southern Evangelicals, and the Better Way of Jesus”)