To celebrate the launch of Pray and Color, Paraclete Press has six copies to give away to readers of this blog. To enter, write a comment below with a number between 1 and 1000 by midnight EST on Saturday, August 27. You can enter up to three times with the same user name (in separate comments). Shipping is free for those with U.S. mailing addresses. Winners–those whose entries were closest to the chosen number–will be announced on Monday, August 29.

Sybil MacBeth made “praying in color” a thing long before adult coloring books were cool. Now you can buy them in the checkout line at the grocery store. Back in 2007, some people thought her method of praying while doodling was nuts.

But others loved it, including me. I’m a big fan of Sybil’s creative, hands-on approach to prayer. (Not that I’m remotely artistic, but you don’t have to be.) The original Praying in Color book has sold close to 60,000 copies, and its many offshoots—the kids’ book, the portable edition, the workshop DVDs—bring that closer to 100,000.

Now there’s an official Pray and Color coloring book, in which you can draw, pray, scribble, pray, doodle, and pray some more. Pray and Color gives you templates (in fact, you can download several PDF samples at the end of this post) but lets your spirit and your creativity take charge.

RNS: Why do you think the series has been so successful?

MacBeth: When it first came out, it was such an oddity. People would say, “You’re praying with doodling?” Like they weren’t sure it was spiritually legal. 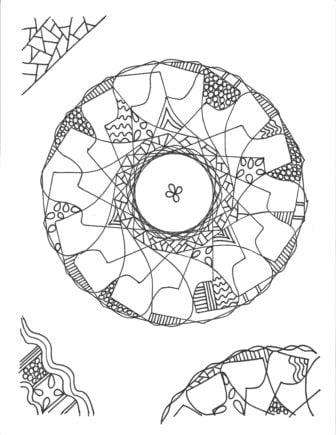 It’s playful but also prayerful. There’s some connection between prayer and play—in both, there’s a vulnerability. You become childlike and you sort of surrender to the moment.

I think it’s also about learning styles. When people are sort of suspicious, I say, “If your child didn’t know how to do math, would you tell that child ‘If you can’t do it the way I learned it when I was growing up, you’re out of luck?’ Of course not. But that’s what we do with teaching people how to pray. We put a choke chain around prayer.

My own learning style is that I hold information in my head visually. When I used to take notes in school, I would put them cock-eyed. We would get in trouble if we doodled. But that’s the way some of us pay attention; we are inviting our body to participate in the experience and that allows us to settle and to concentrate longer. It caters to people who are visually oriented and process visually. And you can also include words. What happens for me sometimes is that when I start doodling and putting down someone’s name, it gives me the time to get still and listen for what God might want to say to me. I don’t chase words away, but I also don’t force them. Drawing actually allows me to sit in prayer way longer than I ever could before. It gives my hands and mind something to do, and gives me time to focus.

RNS: What will people get out of this Pray and Color coloring book?

MacBeth: I’ve realized in my workshops that some people are hesitant to doodle, so what this coloring book does is provide a framework or a template for people. I’m a huge fan of frameworks, because they actually give people the space to be free. The coloring pages give people both freedom and security.

As a parent, I used to diss coloring books as not being creative. But I think now that was wrong. They are an excellent starting place for creativity. Also, if you do like to doodle, the spaces here are big enough that you’re welcome to add your own shapes and ideas. 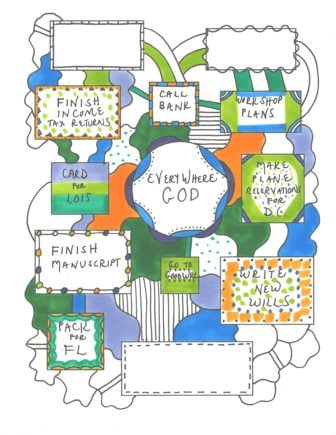 RNS: How do people use it?

MacBeth: In the beginning, it introduces 14 different ways to pray using these templates. One of the ones I like is the “to-do list” coloring page. We always talk about how much we have to do today, but we never actually pray about it. So there’s a template for you to pray about the things you have to do today.

RNS: Yeah, I think I need that one!

MacBeth: If people want to use a particular template over and over again, I invite them to make a copies of it. I mean, if they want to give it to a 400-person Sunday School class, they should contact Paraclete.

RNS: Which ones are your favorites?

MacBeth: One of the things I like most here is “Praying for your enemies.” When I have to look at a person’s name who has caused me harm or hurt, it’s much harder than if I just say a quick little verbal prayer. Seeing an “enemy’s” name in living color and sitting with it in prayer is not easy. But it often brings me more healing than the prayer that passes through my head and disappears.

Some of the prayers are the standard things like praise and adoration, but there are others that are a little different. There’s a template for disgruntled prayers—I think it’s good to write the things you’re ticked about—and also for “gruntled” prayers.  Did you know that gruntled is a word?

RNS: No, I did not. I am gruntled to hear it. And very gruntled about the new coloring book.