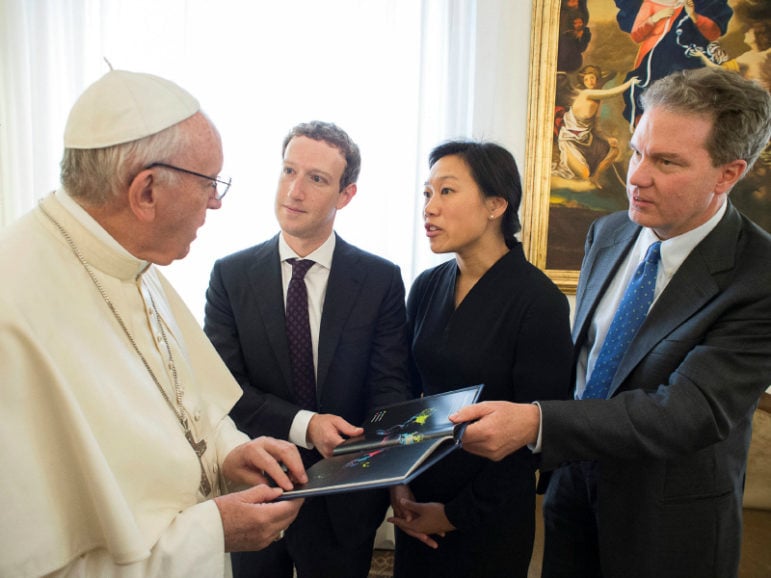 Pope Francis talks to Facebook CEO Mark Zuckerberg, second from left, and his wife Priscilla Chan during a meeting at the Vatican on August 29, 2016. Vatican spokesman Greg Burke is at far right. Photo courtesy of Reuters via Osservatore Romano

VATICAN CITY (RNS) Pope Francis is the king of Twitter and other social media outlets but he’s still not on Facebook, the most dominant digital platform in the world.

Will that change following his meeting with Facebook founder Mark Zuckerberg on Monday (Aug. 29)?

The Vatican wasn’t saying, and neither was Zuckerberg, and the focus of their private meeting — which was also attended by Zuckerberg’s wife, Priscilla Chan — was about helping the poor more than building profiles.

“It was a meeting we’ll never forget,” the Facebook CEO wrote on, yes, Facebook, shortly after the audience in the Vatican. “You can feel his warmth and kindness, and how deeply he cares about helping people.”

The Vatican released a brief statement saying that Zuckerberg, Chan and the pope “spoke about how to use communications technology to alleviate poverty, encourage a culture of encounter, and to communicate a message of hope, especially to the most disadvantaged.”

The 32-year-old Zuckerberg and Chan were in Italy to attend the wedding of a friend, Spotify co-founder Daniel Ek, which took place Sunday at Lake Como in northern Italy.

Zuckerberg also told university students in Rome on Monday that  Facebook will give 500,000 euros, or about $560,000, to the Italian Red Cross to help relief efforts in the earthquake-stricken region north of Rome.

After meeting with the pope, Zuckerberg posted a photo of himself showing Francis a model of a solar-powered aircraft, named Aquila, “that will beam internet connectivity to places that don’t have it.” (“Aquila” is the Italian word for eagle.)

The internet-aircraft plan stems from the work of the couple’s charitable foundation, the Chan Zuckerberg Initiative.

Zuckerberg said they also told the pontiff “how much we admire his message of mercy and tenderness, and how he’s found new ways to communicate with people of every faith around the world.”

Francis has not only captured the imagination of Catholics and the wider public since he was elected pope in 2013, but he has become one of the most influential leaders on Twitter — with over 30 million followers across his nine accounts — and on other social media platforms.

READ: Pope Francis to spread his message on Instagram

But the pontiff is not on Facebook because, as his former communications chief explained in 2014, abusive comments  on Facebook would be “more prominent” than those on Twitter.

Francis, who has called the internet “something truly good, a gift from God,” has met several times with top tech leaders, such as Eric Schmidt, executive chairman of Google’s parent company, Alphabet Inc., and Tim Cook, CEO of Apple.

And the pope did join Instagram — which is owned by Facebook — in March, less than a month after he met the company’s CEO, Kevin Systrom.

(Josephine McKenna covers the Vatican for Religion News Service. David Gibson is a national correspondent based in New York)