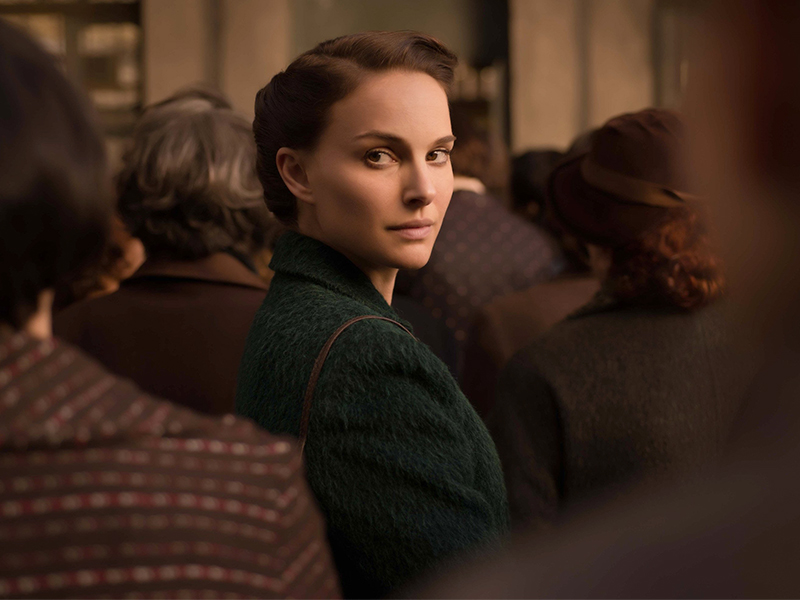 Natalie Portman directed and stars in "A Tale of Love and Darkness."
August 29, 2016
Jeffrey Salkin

I have just returned from seeing "A Tale of Love and Darkness," directed by and starring Natalie Portman. The film is based on the memoir by the Israeli writer and public intellectual, Amos Oz, who happens to be one of my heroes.

"A Tale of Love and Darkness" tells the story of young Amos (whose birth name was Klausner), growing up in Jerusalem in the years immediately preceding and following the creation of the State of Israel. In particular, it focuses on his mother, Fania, and her emotional struggles that mirrored the birth of Israel.

It is a beautiful film -- perhaps one of the most sensitive and nuanced depictions of modern Jewish life and Israeli history to ever grace the silver screen. The film is doubly blessed by Ms. Portman's presence, and her beautiful Hebrew (which is her native language; in fact, the entire film is in Hebrew, with English subtitles).

There are two scenes that will always stay with me, and which are worth the price of admission.

First: Amos' father, Yehuda Arieh Klausner, was a scholarly, bookish man. He dreamed of becoming a best-selling author of scholarly books, like his friend, Israel Zarchi (I retell this story in my essay in Encountering God).

As Oz writes in his memoir, his father would privately print his books, and he would take them to Achiasaph’s bookstore on King George Avenue in Jerusalem.

Klausner’s books sat there in a pile, as he became depressed and discouraged.

Finally, one day he got a call from the bookstore. All of his books had been sold!

Not long afterwards, young Amos was visiting Israel Zarchi in his cluttered apartment.

Mr. Zarchi left the living room to get Amos a cup of hot cocoa. While Mr. Zarchi was in the kitchen, Amos looked around, and he noticed his father's books on a bookshelf.

Israel Zarchi returned to the living room. He saw Amos looking at his father’s books -- and he held his index finger to his lips, as if to say: Please don’t say anything to your father.

Israel Zarchi had secretly bought all of Klausner’s books.

And because of that, the elder Klausner had thought himself to be a minor commercial success, and he continued writing.

This is what Amos Oz has said about that incident:

I have many close and dear friends. And yet, I am not sure that I could do for any of them what Israel Zarchi did for my father. Israel Zarchi was poor. He lived hand to mouth. At a certain moment, he must have said to himself, I can either buy some clothes that I need, or I can buy the three copies of Klausner’s book. And he chose to buy my father’s book.

If you are looking for a cinematic or literary illustration of the true meaning of "chesed" -- deep kindness and compassion -- you might look no further.

Second: One of the most beautiful, and most nuanced, scenes in the film revolves around young Amos' visit to the lavish home of the Silwanis, a wealthy Arab family in Jerusalem.

He strikes up a conversation with their young daughter (introducing himself in Arabic), and tells her that he believes that there is room for both of their peoples in the Land. They speak of their love of poetry and of Jerusalem's neighborhoods.

Amos is ashamed of what has happened, and his father telephones the Arab grandee, expressing sorrow over the incident, and offering to pay for any medical bills.

This incident made a large and lasting impression on Amos -- so much so, that it became a metaphor for the historic relationship between Israeli Jews and Palestinians.

In the Arab family's yard, Amos caused a serious injury. It did not happen out of any malice; nor, really, out of any carelessness on his part. It just happened. And a young Arab boy got hurt.

Amos' family wanted to make amends, to make it right, to engage in what we would now call "tikkun" (repair).

And, so it was with the Jews and the Arabs in the earliest days of the creation of the State.

Yes, there were injuries -- numerous injuries, on both sides. (The film refers to the infamous Arab massacre of a convoy on its way to Hadassah Hospital on Mount Scopus -- in which 78 Jewish doctors, nurses, students, patients, faculty members and Haganah fighters, and one British soldier were killed).

The question is, now: Can Israelis and Palestinians create a future -- without incessant references to the past, and without repeating and tearing scabs off of old and not-so-old wounds?

Give yourself a pre-High Holy Day gift.

Go see "A Tale of Love and Darkness." And read the book as well, for its lyricism and raw emotion.

You will learn about Israeli history and Zionism. Not since the iconic 1960 movie "Exodus" has the birth of Israel been presented with such emotional intensity.

And you will learn more than you had thought possible about the inner workings of the Israeli soul.