(RNS) Maybe atheists should just embrace it as a slogan: “Atheists: The group Americans love to hate.”

About 40 percent of Americans say atheists “do not at all agree” with their vision of America, according to a new study from sociologists at the University of Minnesota who compared Americans’ perceptions of minority faith and racial groups.

But the study marks a grimmer milestone — Americans’ disapproval of Muslims has jumped to 45.5 percent from just over 26 percent 10 years ago, the last time the question was asked.

And “nones” — those who say they have no religious affiliation, but may also have spiritual or religious beliefs — are also unpopular. This is significant because nones now make up one-third of the U.S. population.

The new study also attempts to find out why atheists are so reviled by what its authors call “dominant group members” — aka religious Americans. The findings pinpoint three things: Religious Americans associate atheists with “criminality,” materialism and “a lack of accountability.” 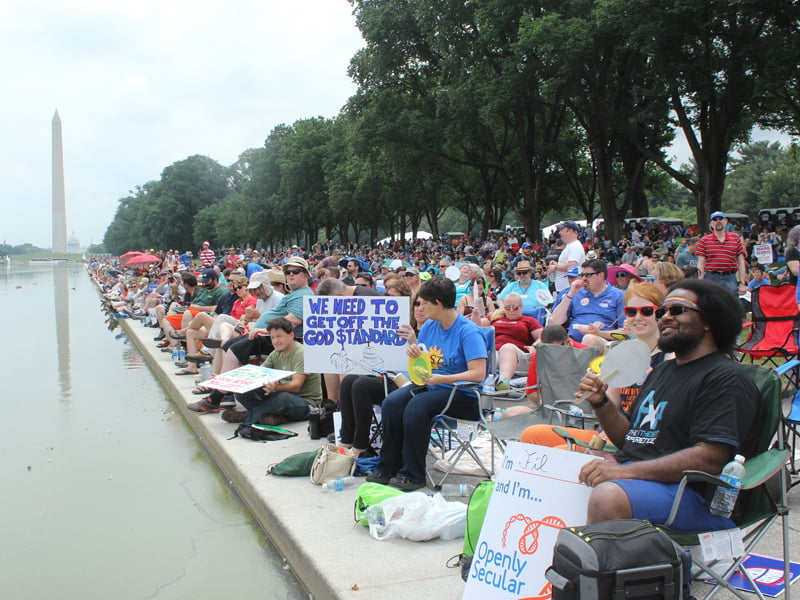 Crowds of atheists and other freethinkers assembled by the Lincoln Memorial reflecting pool for the Reason Rally on June 4, 2016, in Washington, D.C. RNS photo by Adelle M. Banks

The study’s authors — sociologists Penny Edgell, Douglas Hartmann, Evan Stewart and Joseph Gerteis — describe the jump in disapproval of Muslims as a major change and are focusing now on identifying reasons for it.

“Religion becomes a signal and a marker, an easy shorthand for Americans’ moral judgment,” Hartmann said. “But that is not the only thing going on with Muslims. It’s more complicated.”

But Hussein Rashid, an adjunct professor at Barnard College who frequently writes and consults about Islam in the U.S., said the jump in anti-Islamic sentiment the study pinpoints is reflected in the current political rhetoric.

“The data from this survey shows that there is an increasing pull away from the promise of America,” he said in an email. “In 10 years, people have a more negative perception of Muslims, Jews, gays, Latinos, and Blacks. As a new America is taking shape, with all its diversity, there is a reactionary response that wants a mythic America of everyone being exactly the same.”

The study has more bad news for atheists — despite a decade of organized effort from groups such as American Atheists, the Secular Coalition for America and Openly Secular to normalize nonbelief, Americans are not buying it — religious belief remains a measure of trustworthiness and belonging, the study found.

“Overall, we find no support for the idea that the increasing visibility of non-religious persons, groups, and movements in American life has reduced anti-atheist sentiment in any significant way,” the study’s authors write.

A small bit of good news for nonbelievers: The number of people who say they would disapprove of their child marrying an atheist has dropped slightly, to 44 percent, down from 48 percent in 2006.