WASHINGTON (RNS) Religion is big bucks — worth $1.2 trillion annually to the American economy, according to the first comprehensive study to tabulate such a figure.

“In perspective, that would make religion the 15th largest national economy in the world, ahead of 180 other countries in terms of value,” said Georgetown University’s Brian Grim, the study’s author. 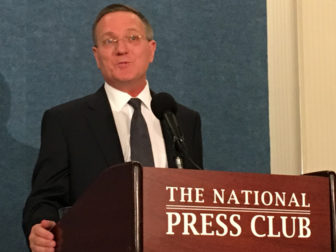 Brian Grim, associate scholar at Georgetown University’s Religious Liberty Project, presents his new study on the worth of religion to American society at the National Press Club in Washington, D.C., on Sept. 14, 2016. RNS photo by Lauren Markoe

It might seem folly to try to put a number on religion’s value to American society. Even Grim understands why the religious and nonreligious alike might look upon the exercise skeptically.

You may think that’s not possible,” he said at the study’s release Wednesday (Sept. 14) in Washington, and he compared it to putting a price tag on love.

“But if you realize that love often results in marriage and marriages often happen in churches … ” Grim continued. “I can tell you exactly how much money poured into center city Baltimore when my daughter got married there a year and a half ago.”

To put a value on the work of the nation’s 344,000 religious congregations — representing all faiths — Grim looked at the schools they run, the soup kitchens, the addiction recovery programs and their impact on local economies. Churches, synagogues, mosques and other houses of worship mostly spend locally — employing hundreds of thousands of people and buying everything from flowers to computers to snow removal services. 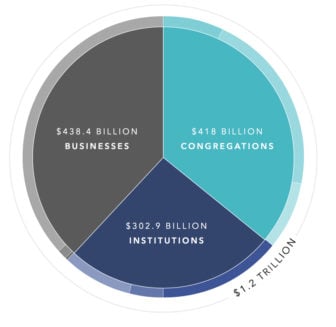 A pie chart represents the results of a study titled “The Social Economic Contribution of Religion to American Society: an Imperical Analysis,” by Brian Grim of Georgetown University and Melissa Grim of Newseum. Graphic courtesy of Faith Counts

Grim came up with three estimates and settled on the middle one — the $1.2 trillion — as what he called a “conservative” appraisal of the work of religious organizations in American society annually.

Why crunch these numbers? Grim, an associate scholar at Georgetown’s Religious Freedom Project, said it’s good to know where religion stands. By one of his colleague’s estimates, that $1.2 trillion equates to about 7 percent of the nation’s GDP.

But Grim also wants congregations and clergy — and the society that benefits from the charitable work of the religious — to appreciate this generosity. In a culture in which people often hear much more about the evils committed by religious people — from sex abuse scandals to genocide — it’s time for some “balance,” Grim said.

Even clergy often downplay the value of their work, said Ram Cnaan, who directs the Program for Religion and Social Policy Research at the University of Pennsylvania and came to Washington to help Grim unveil the new study.

Cnaan — though quick to describe himself as secular — hopes Grim’s work boosts the confidence of the religious and allows them to take pride in their contributions to the economy and society.

“This is a new day for the people who study congregations,” he said of the study, titled “The Socio-economic Contribution of Religion to American Society: An Empirical Analysis.”

“This is the beginning of a national debate — not if religion is important but how much it is important,” Cnaan said.

The Rev. Eugene Rivers, a Pentecostal minister from Boston known for his efforts fighting crime and drug abuse, seemed glad for the acknowledgment.

When it comes time to deal with the messy drug problems of the inner city, he said to the group of clergy, lay leaders and journalists gathered for the study’s unveiling, “none of the the secular left shows up.”

Grim put Rivers’ point in context. Secular organizations certainly contribute generously to the social health of the nation, he said. But he also noted a recent Pew Research Center study that showed that the religious are more likely to volunteer to help others, and give more to charity on average than the nonreligious.

Without the charitable work of religiously motivated people, “I don’t think we would see all the good of society disappearing,” said Grim.”But I think it would be significantly less.”

Grim’s study notes that congregations and religiously oriented charity groups are responsible for:

William A. Galston, a Brookings Institution scholar and former Clinton administration official who writes on religion and society, called the $1.2 trillion “a sensible number.”

Faith issues and religious leaders don’t get much attention by senior government officials, continued Galston, who served as a deputy assistant to former President Bill Clinton for domestic policy and who was invited to speak at the study’s release.

Grim’s paper, Galston said, can be used by religious organizations as “a credible calling card to get in the door.”