ROME (RNS) Pope Francis met with refugees and leaders of religious faiths including Christians, Jews, Muslims and Hindus who joined him for a day of prayer for peace in Assisi, home of his namesake, the 12th-century friar St. Francis.

But it was the migrants he invited to join him for lunch on Tuesday (Sept. 20) who captured the headlines and illustrated the tangible impact of war and conflict.

Among them: 6-year-old Maria, the pope’s youngest guest, who came to Italy from the Syrian capital, Damascus, four months ago. With her parents, Nour and Mohanad, she traveled on a boat from Libya across the Mediterranean to Turkey.

The pope asked another young guest, 8-year-old Qudus from Syria, to make the appeal for peace. She was among those who traveled to Italy with Francis aboard the papal plane when he returned from his visit to Lesbos in April.

Tuesday’s peace lunch was held at the refectory of the Franciscan friars in Assisi, which hosted the 30th World Day of Prayer for Peace, established by St. John Paul II in 1986.

Throughout the day, Francis had individual talks with Ecumenical Patriarch Bartholomew I; the head of the Anglican church, Archbishop Justin Welby; and Patriarch Aphrem II from the Syriac Orthodox Church, as well as Muslim and Jewish leaders.

The refugees came from countries including Syria, Eritrea, Mali and Nigeria. Many escaped war and conflict at home and are seeking a new life in Italy, where they are living in migrant centers.

One man from Mali, who identified himself by his first name, Sira, first met Francis when the pope washed his feet nearly six months ago as part of the annual Easter ritual. A Muslim, Sira survived a voyage by boat from Libya. He is no longer a refugee; he now has a legal work permit.

“I believe there is no difference, we all pray to the same god,” he told Italian media ahead of Tuesday’s event.

Earlier Tuesday, the pope said the world had to go “beyond the divisions of religion” and appreciate the “shame” of war.

“The world is at war. The world is suffering,” Francis said during the homily at morning Mass at the Vatican.

“There is no God of war,” he said while urging “all men and women of goodwill, of any religion, to pray for peace.” 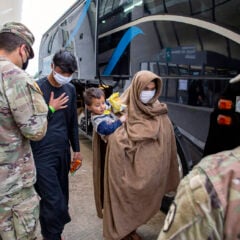 News
Safe in the US, Afghan evacuees turn their attention to the families they left behind

News
How to help Afghans arriving in the US after fleeing the Taliban
Follow us on Facebook!
Submit your photos to RNS