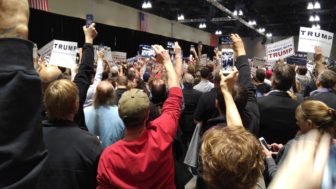 (RNS) In February of 1993, Washington Post political reporter Michael Weisskopf wrote that the followers of Jerry Falwell and Pat Robertson “are largely poor, uneducated and easy to command.”

The next day, after a flood of angry phone calls, the Post printed one of the most abject retractions in the history of journalism: “There is no factual basis for that statement.”

Religious conservatives have ever since cited Weisskopf’s line as proof positive of the mainstream media’s contempt for people of faith. But a quarter-century later, it may be time to revisit its factual basis.

This election season, we all have become aware that support for the two main presidential candidates varies according to level of education. Americans with college degrees are more likely to support Hillary Clinton. Those without trend toward Donald Trump.

Now comes fivethirtyeight.com with survey data showing that education together with religious attendance constitute “the two most predictive variables” in presidential choice among white people. And Milo Beckman presents a nifty chart that shows how. 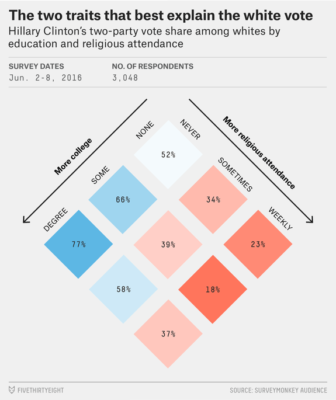 In other words, Trump’s white followers — which is to say, most of them — tend to be religious attenders who are “largely uneducated.”

They’re not poor. “Despite the myth that Trump’s base is poor whites,” writes Beckman, “income is the least predictive of white voter support among the seven demographic variables tracked by the poll.”

Are those uneducated religious supporters easy to command? That’s a trickier question.

They certainly are ignoring #nevertrump evangelical leaders like the Southern Baptist Convention’s Russell Moore. Perhaps they would be less supportive of the GOP nominee were it not for enthusiasts like Jerry Falwell, Jr.

But however you slice it, they appear prepared to heed The Donald, whatever he commands.