(RNS) As racial strife troubles this nation, it is tragic that many of the leaders who claim they are dealing with the problem are actually fueling tensions. For one, there is an issue over proper terminology. Second, there are problems over the ways in which race issues are being approached both scientifically and historically.

In 2000, researchers with the Human Genome Project unanimously declared there is only one race: the human race. The word “race” once meant “ethnic group.” Charles Darwin referred to “civilized races” versus “savage races.” Sadly, Darwinian thinking has influenced the way many people view the word “race,” even into the 20th century.

For example, a biology textbook used in many U.S. public schools around the time of the 1920s Scopes trial said: “At the present time there exist upon the earth five races … the highest type of all, the Caucasians, represented by the civilized white inhabitants of Europe and America.” Sadly, even some Christians have used such wrong ideas to perpetrate various injustices on different-looking members of the one human race.

More than half a century has passed since the horrors of the racial extermination camps of the evolutionary-thinking Nazis. Yet the struggle against ethnic hatred and violence remains one of the burning issues of our time. Billions of dollars are spent fighting it. Presidents consult civic and religious leaders for answers, while many Americans take to the streets to give voice to their dissatisfaction. Everyone seems to be wrestling with the problems of racial prejudice … yet solutions seem to evade us. But here are some suggested remedies.

From a genetic standpoint, today’s scientists have abandoned the word “race” for humans — and so should everyone else. I urge President Obama, Al Sharpton, Jesse Jackson and others to abandon the word “races” and use “people groups” instead — to emphasize we are all one race, one blood and one family, and get away from any racist connotations.

COUNTERPOINT:  No, Ken Ham, whites are not colored people

It’s a fact of science that all humans are the same basic color, just different shades. The main substance in our bodies that determines skin color is melanin. There are no truly “white” people or “black” people. Humans have different shades from light brown to very dark depending on how much and the type of melanin. It’s a fact that all humans are colored people. (By the way, albinism — a lack of the pigments — is a rare condition that can occur in all people groups.) I challenge the president and others currently weighing in on race matters that we are all colored people — just different shades of brown.

We should heed what the Bible teaches, namely that God “made from one blood every nation of men to dwell on all the face of the earth” (Acts 17:26). Yes, God’s word declares that all humans are one race, descendants of Adam and Eve. Further, we are also all descended from Noah and his wife. After the global flood, as Noah and his family left the ark, it was from these eight individuals that all people groups arose. At the Tower of Babel, Noah’s descendants were dispersed throughout the Earth, populating the continents with the same genetic makeup that each of us still carries today. 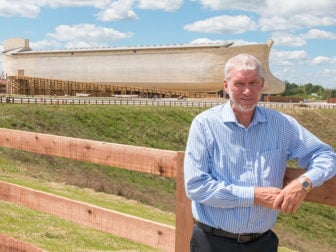 We are one blood, one family. What a difference it would make if we all started looking on each person, wherever they are in the world, as our relative — each is a family member deserving our love and care. Each of us needs to judge our actions against the absolute authority of God’s word and recognize that we are all made in God’s image, but are sinners and fall short of his glory.

How grateful I am that we have the Bible to guide us in healing these wounds.

(Ken Ham is president of the newly opened Ark Encounter as well as Answers in Genesis, a Christian ministry. He is co-author of the book “One Race, One Blood”)