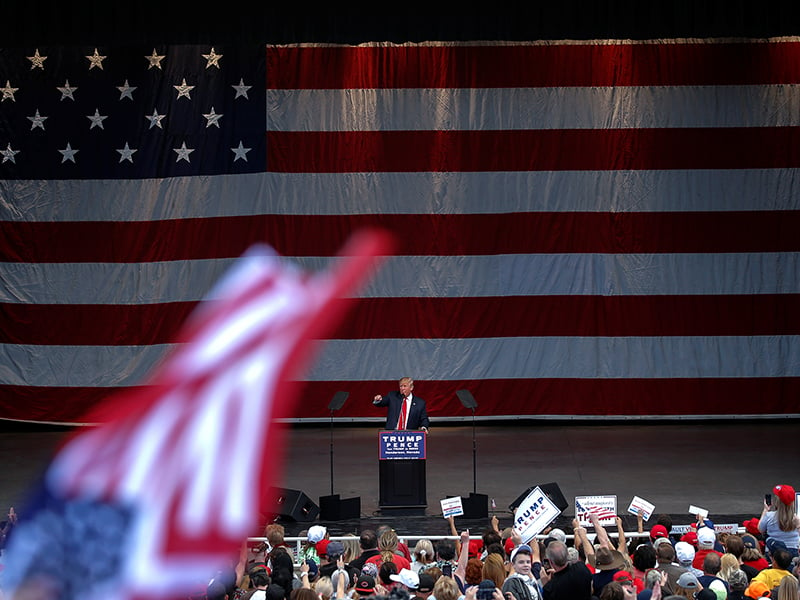 Republican presidential nominee Donald Trump speaks at a campaign rally in Henderson, Nev., on Oct. 5, 2016. Photo courtesy of Reuters/Mike Segar *Editors: This photo may only be republished with RNS-BURANA-OPED, originally transmitted on Oct. 6, 2016.

(RNS) You’ll not find a more personable world than the unapologetically cornball community that springs up in RV parks. Pull your camper into your assigned spot, set the gravity chairs near the fire ring, unfurl the American flag and start making friends. Mister Rogers by way of Toby Keith.

As a sloppily, if happily, reawakened Christian, I get lots of practice, while camping, on the love-thy-neighbor front, which I enjoy.

A few weekends ago, our neighbors across the campground’s gravel path were a family of four with a lazy beagle my toddler daughter loved. The wife, a sleek brunette from the more conservative town next to our Hudson Valley village, fell into conversation easily over several glasses of wine — we covered pedicures, yoga pants, cooking, kids.

She works, I work, both our husbands are former military. Our alliance was swift, my daughter gleefully patting the dog’s tummy as we talked.

“We should hang out after this weekend,” she said. I looked forward to it.

While my husband and I grilled burgers later, he told me that the husband had obliquely informed him that he and his wife were voting for Donald Trump. Just then, a guy strolled past in an NRA T-shirt and said hi.

During an after-dinner walk with my husband, I noticed a few Trump campaign signs staked by people’s RVs. The crowded camp suddenly felt very claustrophobic. The friendly campground now seemed like hostile territory.

I’m used to political discord on social media, having witnessed mad sprees of Facebook unfriending and raging partisan tweetstorms. (I’m not above this, having referred to Trump as a “bellicose circus peanut” on Twitter.) It’s easy to rise above it by simply clicking past.

But how do I reconcile peace-loving Christian values with the apoplectic rage I reflexively feel upon seeing a Trump: Make America Great Again sign in person? Can I possibly pursue friendship with someone with whom I am so political misaligned?

After a bath and a toweling-off, the baby wanted to wander over to the campsite across the way to visit the beagle that stood at the end of her chain wagging her tail.

The wife invited Mike and me over for after-dinner drinks, but we demurred.

“Don’t you think they had enough to drink earlier today,” I snarked to my husband back at the camper. I rocked the baby to sleep with her favorite lullaby of the moment, “Mercy Now” by Mary Gauthier, whose voice, soft with bluesy depth, has a soporific effect on the kid: “I love my church and country, they could use some mercy now.”

While I stroked the baby’s back, her sweaty forehead tucked in the crook of my neck, I realized that it wasn’t any reflexive snobbery keeping me from dropping in on happy hour. Hauteur was a mask for fear. I wasn’t judging this woman; I was afraid of her. Afraid of what her choice of candidate said about her character, her conscience.

Trump has been shorthanded as “the Christian candidate,” which troubles me, and many other Christians I know, as his values seem entirely inconsistent with the teachings of Jesus. We’d never vote for him. Not ever.

The following morning, my husband dispatched me to the playground with the baby while he cleaned up the campsite. At the swingset, I met a pair of grandparents from the Bronx with two of their granddaughters, whom they had adopted.

The girls, 4 and 9, were kind to my daughter. When I complimented the grandmother, who wore an elaborate gold crucifix, about the girls’ good behavior, she credited Catholic school, then said something about the country’s disarray and how she was preparing her granddaughters for the future.

I decided to leave the conversation there. To inhabit and enjoy the moment, I put God front and center and kept politics out of it. Fellowship, edited.

I took my daughter’s hand and we walked away in the heat, calling over my shoulder, “God bless.”

“God bless,” the grandmother called back.

On the first night of the Democratic National Convention, Hillary Clinton tweeted, “We need to build bridges, not walls.” But I never did walk across the gravel path to get that woman’s number. I didn’t feel right about deepening the connection.

If faith can simplify a life, it can complicate it, too, then back around again. The circularity of grace. I can love my neighbor, but I don’t have to solicit her company. I realize that means, effectively, that I’ve built a wall of sorts, which makes me feel sad as well as sane. But when diplomacy is out of reach, distance will have to do.

At checkout time, we hitched up and left the campground, our silver truck tracing the curves of the rural county roads. My anxiety level dropped the closer we got to home and the world I knew. The wild grasses of our river town still grew tall, the trees spanned lush and green, the baby napped.

When we pulled into our driveway, I carried the sleeping baby to her crib, knowing I wanted to change, to become a bridge-builder, but that this transformation may have to be wrought by a higher being.

We’ve all become inured to “thoughts and prayers” being offered as tragedy after tragedy unspools before us because without corresponding action, what good is prayer, really?

But even though it often isn’t enough in itself, I do believe that prayer has expansive utility. As the election battle heats and the world seems increasingly tumultuous, I need prayer more, not less. In fact, I need it more than ever. When you can’t rely on your own mettle, you turn humbly to higher sources.

After lulling the baby to sleep with my own voice, I prayed for the power to sustain tolerant Christian love in the face of political dissonance and divined an election season spiritual survival strategy:  to double down on the devotional petitioning, pitching myself and the weight of my fears into the infinite arms of mercy. Now.

(Lily Burana’s fourth book, “Grace for Amateurs: Field Notes on a Journey Back to Faith,” will be published in 2017)