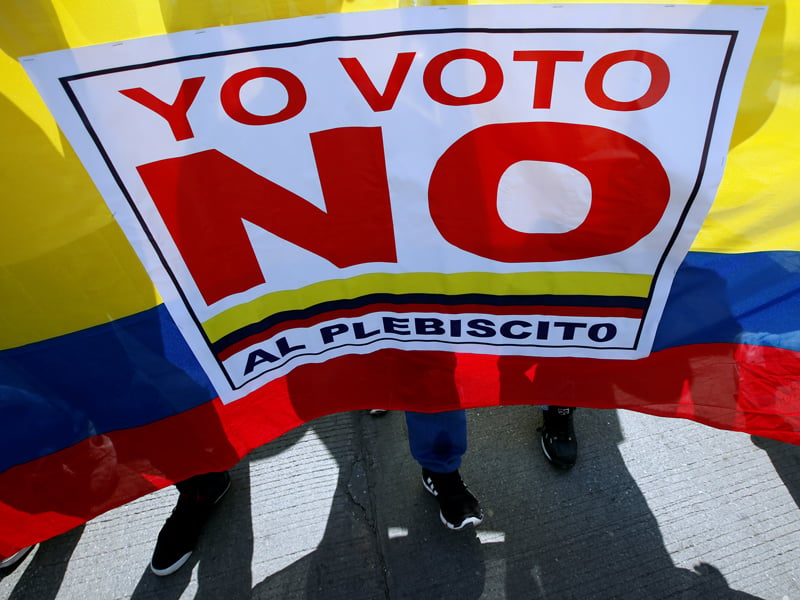 Demonstrators shout “I vote NO to the plebiscite” to protest the government’s peace agreement with the Revolutionary Armed Forces of Colombia (FARC) in Cartagena, Colombia, on Sept. 26, 2016. Photo courtesy of Reuters/John Vizcaino *Editors: This photo may only be republished with RNS-CHESNUT-OPED, originally transmitted on Oct. 11, 2016.

(RNS) While the evangelical right in the U.S. is experiencing steady decline, its counterpart in much of Latin America is a driving force behind the shift to the political right across the region.

Since the 1970s, Latin America has witnessed such meteoric evangelical growth that several countries are no longer Catholic-majority. Guatemala, Honduras, El Salvador and Uruguay lead the pack of nations in which there are now far more active evangelicals than Mass-attending Catholics. (Brazil, though still home to the world’s largest Catholic population, now boasts the second largest number of Protestants, behind the U.S., and leads the world in Pentecostals.)

Some 70 percent of all Protestants in Latin America are Pentecostal. Brazil’s behemoth, the Assemblies of God, ranks as the largest Pentecostal denomination in the world, with an estimated membership of 10 million to 12 million people. If cardinals chose Francis as the first Latin American pope, it was largely in response to a state of panic over five decades of Catholic hemorrhaging, to the extent that the region is now only 69 percent Catholic and the great majority aren’t regular church attendees.

As in the U.S., evangelical engagement in the political arena is of recent vintage. Just as televangelist Pat Robertson blazed a political trail by running for president as a Republican in 1988, Latin American evangelicals jettisoned their historic view of the political arena as the devil’s playground and began to elect their own candidates to office.

In Brazil, the “evangelical caucus,” a loosely organized coalition of predominantly Pentecostal members of the lower house of Congress, has numbered between 70 and 80. In Guatemala, Gen. Efrain Rios Montt made hemispheric history by becoming the first Pentecostal head of state through a military coup d’etat in 1982. His ethnocidal, scorched-earth campaign against the guerrilla insurgency resulted in the death of some 30,000, mostly Mayan, Guatemalans during a dictatorship that lasted less than two years.

While the great majority of Latin American evangelicals don’t share Rio Montt’s fascist political orientation, their rising political influence has been instrumental in the region’s current shift to the right.

In Brazil, the president of Congress, Pentecostal Eduardo Cunha, led the successful impeachment process of President Dilma Rousseff. Cunha himself was recently expelled from Congress on corruption charges as evangelical officeholders have proved to be as corrupt as, if not more than, their nonevangelical cohorts.

In Rio de Janeiro, known for its sensual beach culture, Marcelo Crivella, a bishop of Brazil’s controversial Universal Church of the Kingdom of God, easily won the first round of the mayoral race and is expected to be the victor in the upcoming runoff. Crivella’s Universal Church is one of the intriguing exceptions to the rightward evangelical orientation. Led by billionaire Bishop Edir Macedo, the church was a bedrock of support for the leftist administrations of both Presidents Lula da Silva and Rousseff. However, Macedo abandoned support of their Workers’ Party during the impeachment process, and his nephew Crivella is running on a platform that is to the right of center.

In Colombia, the growing evangelical right was instrumental in defeating the recent referendum on the peace accord between the government and the FARC guerrillas. A shockingly low voter turnout of just 37 percent of the electorate allowed for greater evangelical influence.

Along with more conservative Catholics, Colombian evangelicals strongly opposed the recent legalization of same-sex marriage and object to what they see as the language of “gender theory” contained in the peace accord. Ironically, while Colombia’s Catholic Church  aided in the peace process, Pope Francis has recently been railing against gender theory allegedly being forced on students as part of the curriculum in many school systems across the globe but especially in the Americas and Europe.

In Mexico, we see the same growing alliance between the evangelical right and conservative Catholics, who have come together to fight President Enrique Pena Nieto’s recent proposal to implement gay marriage on a national level.

Though only 12 percent of the Mexican population, evangelicals have formed strategic alliances with conservative PAN (National Action Party), which was founded by Catholics and has always been close to the church. Given Pena Nieto’s record low levels of approval, there’s a good chance the evangelical-Catholic coalition will be able to defeat his same-sex marriage proposal.

In short, while the American evangelical right faces a major defeat by continuing to hitch its wagon to a candidate severely at odds with their professed values, its counterpart in Latin America is ascendant.