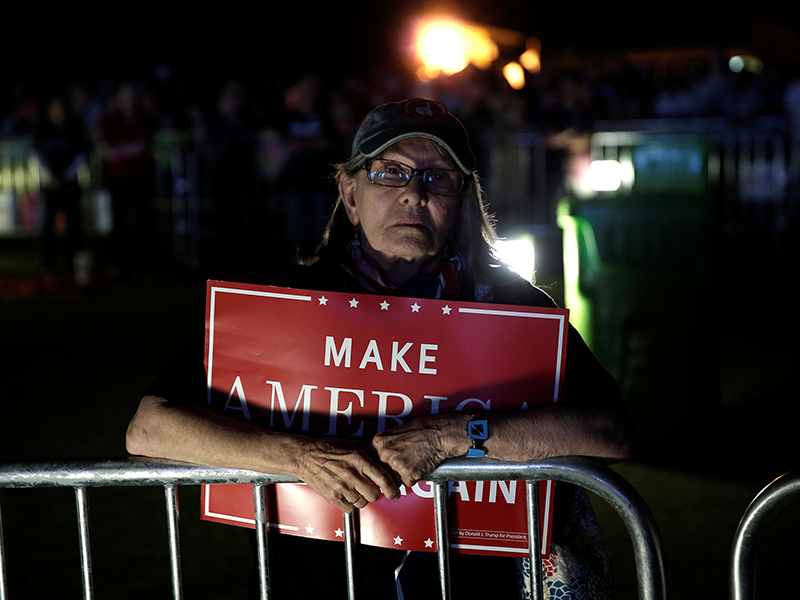 A Donald Trump supporter watches a campaign rally in Panama City, Fla., on Oct. 11, 2016. Photo courtesy of Reuters/Mike Segar *Editors: This photo may only be republished with RNS-FRANKLIN-OPED, originally transmitted on Oct. 12, 2016.

(RNS) This semester I’m teaching a course called “Faith and Politics” at Emory University’s Candler School of Theology. It’s been a fascinating class for me and I’m blessed to have very bright students who are required to volunteer for an actual political campaign and keep a journal of their experience.

Their final assignment is to write a paper proposing strategies for healing our divided nation. Our assumption is that all of the major faith traditions have important resources to bring to conflict transformation and reconciling opponents.

There are a few lessons from my class that might be useful for politicians and for the entire nation as we move toward the election.

First, moderation is an ancient virtue with modern applications.

We have read Aristotle, who focuses on character and virtue as key elements for effective citizenship and leadership. He explicitly warns against allowing our personality traits and behaviors to become extreme, rather urging us to pursue the moderate middle or what he calls the “golden mean.”

Aristotle also teaches that citizenship is a form of friendship in which we should become friends of the city and its common good.

We read cognitive psychologist George Lakoff, who popularized the idea of mental “frames” or word pictures and phrases that grab people emotionally and intellectually and offer them a simple story of the good society and of human possibility.

Remember Ronald Reagan’s phrase “It’s morning in America”? I think this is what Donald Trump is aiming for as he speaks of “making America great again,” and similarly, it’s the aim of Hillary Clinton’s vision slogan, “better together.”

But the art of persuasion can be just that, an art, a performance, and something that can be faked. That’s why our class has talked about the importance of raising critical questions and demanding evidence for every claim made by solicitous politicians.

Aristotle also had much to say about rhetoric as the art of persuading others to embrace your arguments. Fear and emotional manipulation through campaign rhetoric are not worthy of intelligent citizens who bear the heavy responsibility of deciding how to “promote the general welfare, and secure the blessings of liberty to ourselves and our posterity,” to quote the wonderful language in the Preamble of the Constitution

We have learned from Martin Luther King Jr. the importance of occasionally being what he called “transformed nonconformists.” These are women and men who love their nation and love truth and justice so much they are willing to risk their well-being and violate conventional norms of acceptable behavior to advance the common good.

But visionary leadership must also be balanced by competent management.

I have used a wonderful workbook, “Learning to Lead” by experts Warren Bennis and Joan Goldsmith, to talk about key competencies every leader must master. These include building trust through integrity, mastering the context, knowing yourself, developing a powerful vision and communicating with meaning. Few leaders have all of these qualities in perfect balance, but they are certainly worthy goals for which to strive.

The course has included an evening lecture series that has been open to the public. We have heard from scholars, public intellectuals and government leaders as they reflect on the role of values and religious beliefs in our national political life.

As Robert Putnam of Harvard University observes, America is a remarkably devoted, religiously diverse and relatively tolerant nation, despite serious departures from the ideal throughout history.

As for my students, they are already thinking about the post-election national mood and direction. Ultimately, our divided nation must heal. And many of us believe that America’s religious traditions can help accelerate the healing process.

One of our lecturers, ethicist Timothy Jackson of Candler, urged us to look back to the time of Abraham Lincoln for clues about how to move forward, especially in relation to difficult issues like healing the racial divide and creating a strong economy that benefits all Americans.

Lincoln also helps us to remember that we share the blessing of citizenship in one United States of America. Lots of brave men and women sacrificed their lives to pass this legacy and gift to us.

Consequently, we should be willing to forgive our former opponents. And, we must be willing to commit to strenuous but uplifting common purposes like educating the next generation and eliminating poverty. Authentic faith also reminds us of the importance of humility and not assuming that one party or one tradition possesses all truth.

Finally, faith must strive to achieve inclusive community where all people are welcome and safe, including the nonconformists.

There is no need to refer to people as “deplorable.” Rather, let’s figure out how we find common ground to establish a foundation for empathy and cooperation. And, it is never acceptable to impose special tests or burdens on one segment of the American population, like Muslims, as some politicians suggest.

I hope that the next president will take a page from Lincoln’s second inaugural address and channel the spirit, maybe even borrow his phrase, “with malice toward none and charity toward all … ”

That’s our best chance for healing and moving forward together.

(Robert M. Franklin is the Laney Professor in Moral Leadership at Emory University)