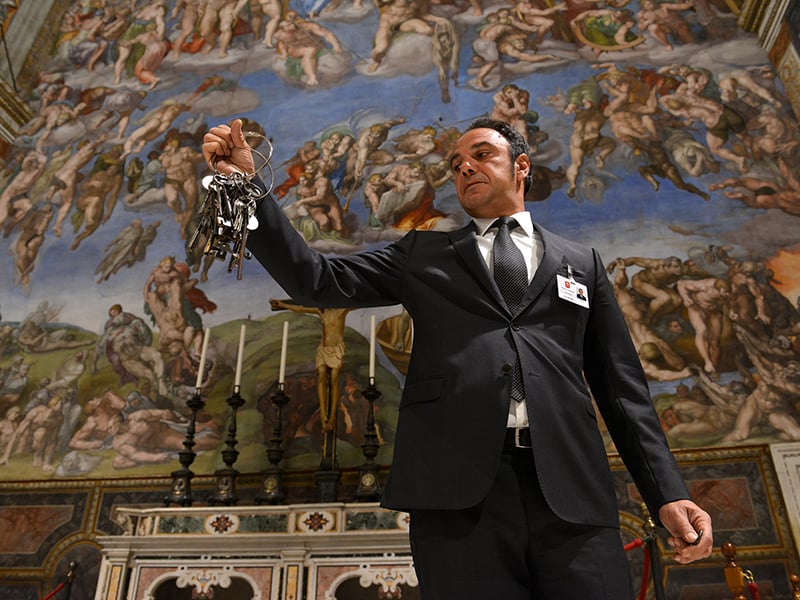 Gianni Crea, chief key keeper at the Vatican, in the Sistine Chapel with the bunch of keys he uses to access all rooms in the museum, on Oct. 6, 2016. Photograph by Chris Warde-Jones

VATICAN CITY (RNS) The sun is not yet up and Gianni Crea is making his way down a pitch-black corridor inside the Vatican’s world-famous museums.

The museums take up much of the real estate on this 108-acre city-state in Rome, one of the oldest and holiest spots on Earth, and one with a history and a reputation for secrecy that have inspired all sorts of conspiracy theories – and more than a few blockbuster thrillers.

But it is Crea who holds the keys to the place – hundreds of them, in fact, heavy metal ones of all sizes.

In the pre-dawn darkness, the 44-year-old Italian selects a couple of them to open several thick wooden and steel doors leading into vast rooms filled with treasures that once belonged to the Egyptian pharaohs and the emperors of ancient Rome.

There’s barely a sound and the corridors are still empty when the neatly dressed Crea suddenly flicks a switch to reveal walls lined with Renaissance frescoes and priceless tapestries.

It’s a stunning moment, and Crea, who holds the title of “clavigero,” or chief key keeper at the Vatican Museums, never tires of it. He manages a dedicated team that opens and closes some 300 rooms every day.

“We are in charge of the keys for the pope’s museums,” Crea tells Religion News Service enthusiastically as he opens one spectacular room after another.

The key keepers are just some of the more than 3,000 lay people who perform largely unheralded jobs in a place that is known for hierarchical pomp and circumstance, and above all, as the residence of the Roman pontiff.

Yet Crea’s job is a reminder that for all the great art and grand personages filling the endless halls of the Vatican palaces, it is also a functioning city-state. And it runs thanks to workers like the key keepers who show up every day so that everyone else — including the pope — can do their jobs.

Of course, the other thing the Vatican is known for is the periodic scandal, such as the leak of personal papers that helped lead to the historic resignation of Pope Emeritus Benedict XVI in 2013.

That in turn led to the election of Pope Francis, who was chosen in part to clean up the Vatican.

Such crises can make the Vatican — and the Italians who make up the bulk of the labor force — the butt of jokes, which is why Francis has been keen to drop in on the workers now and again, chatting or having lunch.

It’s also why he made sure to single them out for praise during a Christmastime speech in 2014, asking their forgiveness for the “shortcomings” of him and his fellow churchmen, and delivering “a particular and, I would say, a necessary thanks to the Italians who, throughout the history of the church and the Roman Curia, have always worked with a generous and faithful spirit.”

The Italians at the Vatican demonstrate a “unique industriousness and filial devotion,” Francis said, and that’s certainly true in the case of Crea, who comes from Reggio Calabria in southern Italy and has been a key keeper at the Vatican for 15 years.

Crea begins his working day at 5:45 a.m. and takes the keys from a tiny underground “bunker” beneath the museums well before the tourists begin lining up. He loves sharing some of the museum’s most precious artworks with the rest of the world.

“This is an extraordinary job because it gives me and my colleagues the possibility to open the pope’s museums to all the visitors who come here from every corner of the world,” Crea says. “It is unique.”

More than 6 million people visit the Vatican Museums every year. What began in the early 16th century with a group of sculptures collected by the famous Renaissance pope, Julius II, has grown into a vast collection of art and sculpture surrounded by architectural splendor.

As Crea makes his way through the rooms, he enters the gallery of tapestries, which span the 15th to 17th centuries, and then the spectacular gallery of maps, decorated under Pope Gregory XIII (who was pontiff from 1572 to 1585) and later restored by Urban VII. 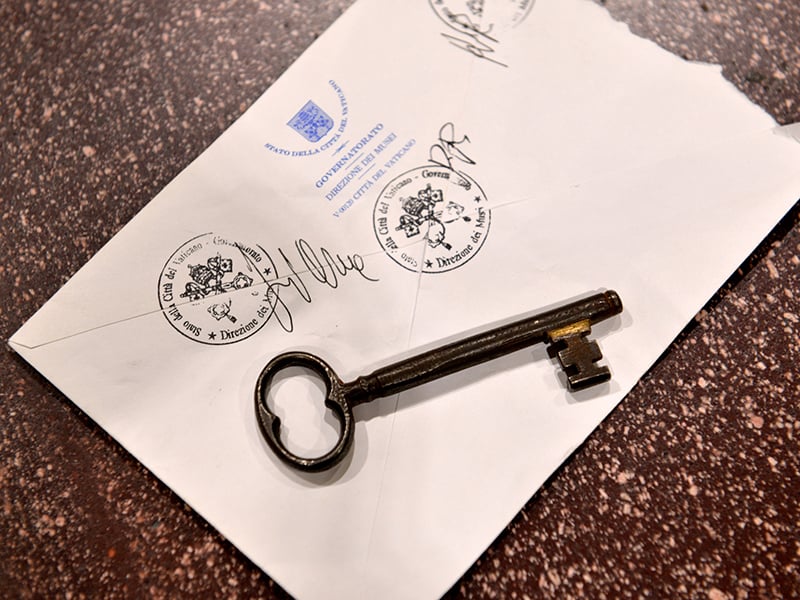 The key to the Sistine Chapel and the envelope in which it is sealed every day. Photo taken on Oct. 6, 2016. Photograph by Chris Warde-Jones

In his hand he also carries a sealed envelope that contains a key to the Sistine Chapel.

Other Vatican staff are usually responsible for opening and closing the chapel, with its famous ceiling painted by the legendary Italian artist Michelangelo. Tourists can walk through briefly, and services are held here on occasion.

But the Sistine Chapel is most famous as the venue for the conclave, where the College of Cardinals elects a new pope, in prayer and total secrecy.

The key keepers have a spare key for the rare times the other staff members are not available, which is why it is sealed and stamped by Vatican gendarmes and senior museum officials. The envelope is only opened two or three times a year.

“The Sistine Chapel is special,” Crea says as he rips the envelope and opens the door.

“To be inside the chapel gives you a particular emotion. But you also find that in the rest of the museum, the picture gallery, the Raphael rooms, the Borgia apartment. They all give you different feelings. Each of them is special.”

“The Vatican Museums span seven kilometers (four miles) through its galleries, rooms and gardens with 70,000 works of art on exhibit – paintings and sculptures — and there are more than 5,000 others in the warehouse,” Paolucci says.

“Think about how delicate the responsibility is for this immense heritage. This man here, the key keeper, opens up everything. He has the keys to heaven.”

Well, technically, and theologically speaking, it is the pope — the successor of St. Peter — who holds those keys, in keeping with the Catholic interpretation of Jesus’ words to Peter as recorded in the Gospel of Matthew.

But given the number of thefts at other European museums in recent years, the more mundane aspects of security are also important.

Crea says he has no concern, as the Vatican Museums are covered in video cameras and alarms and plenty of scrutiny from Vatican gendarme police and security patrols.

His biggest worry, he says, is actually getting into his Rome apartment.

Precise about managing the 2,797 keys at the Vatican, Crea says he often can’t find the one to his own front door.