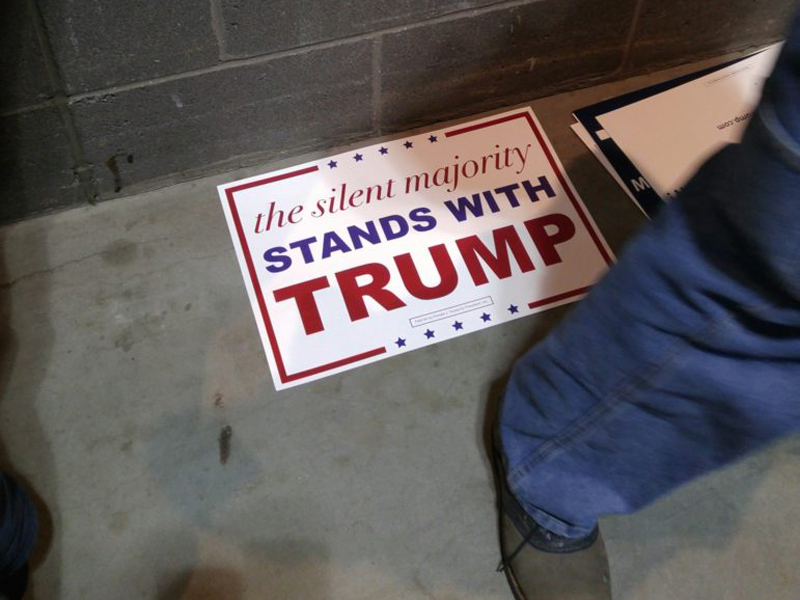 (RNS) His poll numbers tanking, Donald Trump has taken to charging the media, the Democratic Party, and "a global power structure" with conspiring to rig the election for "Crooked Hillary."

Republican leaders have responded with assurances that that the American electoral system is trustworthy.

But as has often been the case this election cycle, the GOP itself laid the groundwork for Trump's latest outrage.

In 1969, Richard Nixon, building on his aide Kevin Phillips' idea of an emerging Republican majority, called his supporters the Silent Majority. A decade later, Jerry Falwell, Sr. embedded Republican majoritarianism in the nascent religious right by christening his organization the Moral Majority.

In a democracy, if your side is the majority, a victory by the other side must be illegitimate -- the result of fraud or deception.

And so we have the tropes of delegitimization, some from the GOP's Christian and alt-right fringes, others from its mainstream: Obama as foreign-born Muslim, voter fraud, Democratic politicians as criminals and antichrists, illegal immigration as political strategy.

Trump has made his political fortune by trading on all of these, from his now-disavowed birtherism to current claims that the Democrats will be flooding the voting booths with illegal immigrants. He calls his opponent the devil. He promises to throw her in jail.

Go to a Trump rally and you'll see the manufactured signs: "The Silent Majority stands with Trump."

It's the old Nixonian trick taken to a terrifying new level.

At last night's final presidential debate, Trump's delegitimization strategy became the lead story, thanks to his refusal to say whether he would accept the result of the election. Except that, notwithstanding the Republican tropes, "strategy" does not quite capture his motivation.

As Hillary Clinton suggests in the exchange below -- and as Trump pretty much confirms by his interjection on not winning an Emmy  -- what's at work has more to do with psychological impulse than strategic calculation. As strategy it backfired, big league.

WALLACE: But, sir, there is a tradition in this country -- in fact, one of the prides of this country -- is the peaceful transition of power and that no matter how hard-fought a campaign is, that at the end of the campaign that the loser concedes to the winner. Not saying that you're necessarily going to be the loser or the winner, but that the loser concedes to the winner and that the country comes together in part for the good of the country. Are you saying you're not prepared now to commit to that principle?

TRUMP: What I'm saying is that I will tell you at the time. I'll keep you in suspense. OK?

CLINTON: Well, Chris, let me respond to that, because that's horrifying. You know, every time Donald thinks things are not going in his direction, he claims whatever it is, is rigged against him.

TRUMP: Should have gotten it.