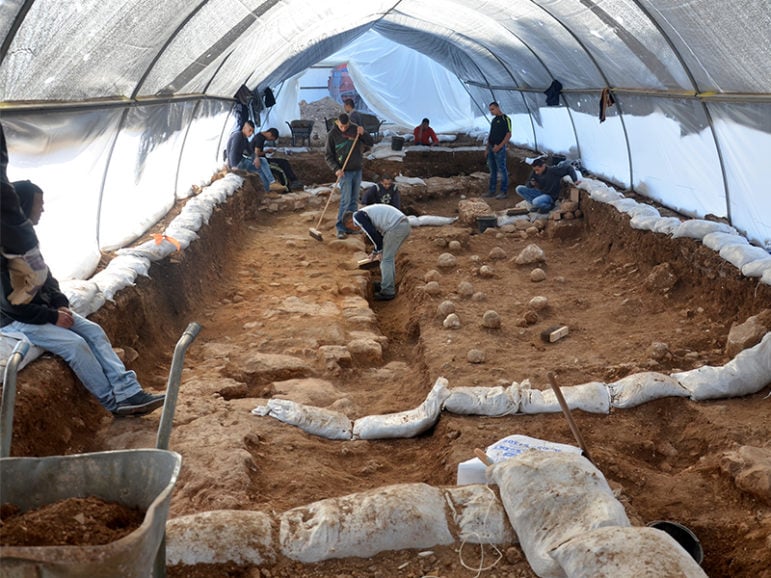 Workers slowly expose artifacts at the excavation site in the Russian Compound in Jerusalem. Slingstones on the ground are evidence of the battle that was waged at the site 2,000 years ago. Photo by Yoli Shwartz, courtesy of the Israel Antiquities Authority

JERUSALEM (RNS) The site where, nearly 2,000 years ago, the Roman army breached the outer walls of ancient Jerusalem before capturing the city and destroying the Second Jewish Temple has been discovered, the Israel Antiquities Authority says.

Archaeologists made the discovery last winter during an exploratory survey at a future construction site, the IAA said on Thursday (Oct. 20).

After expanding the excavation archaeologists discovered the remains of a tower jutting from what they believe was the Third Wall, the outermost wall surrounding Jerusalem at the end of the Second Temple period.

Opposite the tower’s western facade they found dozens of catapults and stones the archaeologists are certain were used by the Romans, led by Titus, against the Jewish guards who defended the wall from the tower.

A spearhead from the battle against Titus’ army. Photo by Clara Amit, courtesy of the Israel Antiquities Authority

Rina Avner, one of the lead archaeologists, told RNS that the discoveries confirm a detailed account of the battle by the contemporary historian Josephus.

“We found pottery from the Second Temple period within the cement of the wall, which was on the same level as the balustrades. We dated the embedded pottery to 70 A.D., the year Josephus said the Romans attacked the city and destroyed the Second Temple, forcing the Jews into exile.

“We were able to cross-reference our finds with the writings of Josephus. It was amazing,” Avner said.

The find comes amid an outcry over a recent resolution by UNESCO that ignores Jewish and Christian ties to the Temple Mount and refers exclusively, as Muslims do, to the Haram al-Sharif, or Noble Sanctuary.

The archaeologist said the latest discoveries add to the large volume of other proof that Jews lived in Jerusalem thousands of years ago.

The UNESCO resolution “erases history and actually tries to destroy our past and the Christians’ past,” Avner said. 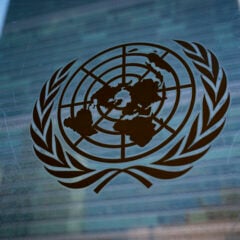