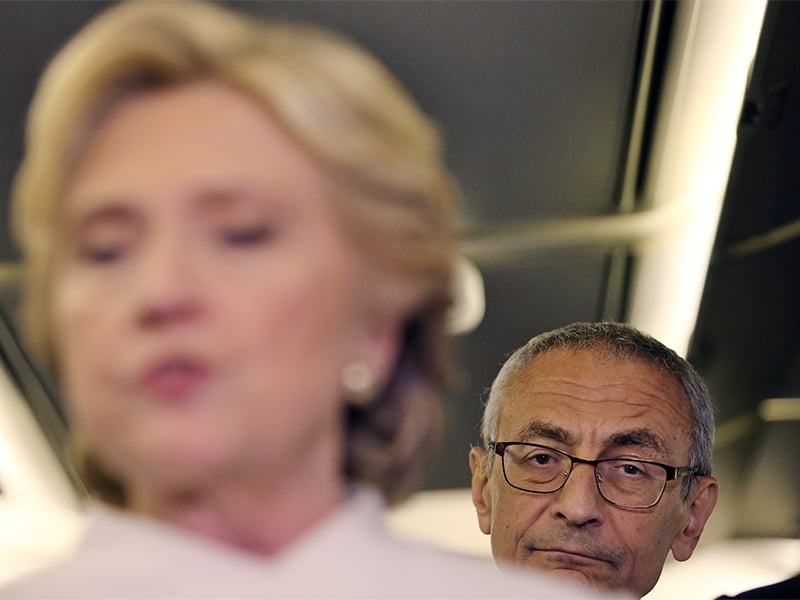 John Podesta, chairman of Democrat Hillary Clinton’s presidential campaign, listens as she talks to the media inside her campaign plane after the third and final 2016 presidential campaign debate in North Las Vegas, Nev., on Oct. 19, 2016. Photo courtesy of REUTERS/Carlos Barria. *Editors: This photo may only be republished with RNS-CAFARDI-OPED, originally transmitted on Oct. 28, 2016.

(RNS) It seems that back in 2011, two Catholics who are now, five years later, working for the campaign of Hillary Clinton apparently exchanged private emails with another Catholic who does not work for the campaign.

In their exchange they were bold enough to openly criticize rich, conservative Catholics whose political views ignored the church’s rich heritage of social justice teachings — teachings based on the command to care for the least among us, as Jesus says in the Gospel of Matthew.

I say “apparently” because these private emails — among Clinton campaign chief John Podesta, campaign spokesperson Jennifer Palmieri, and John Halpin of the Center for American Progress — come from WikiLeaks, which U.S. intelligence agencies say got them from “Russian state actors,” i.e., the Russian government. Now and in the past, the Russians have altered stolen documents before they released them.

Whatever the accuracy of the leaked remarks (Halpin says he did write the email with his name on it), the publication of this private email exchange has given way to ongoing eruptions in the right-wing Catholic blogosphere and from some hierarchs who should know better.

These critics are demanding that Secretary Clinton disavow Podesta and Palmieri for what they say is their “anti-Catholicism” and some are even using the manufactured controversy as a fundraising tool.

The campaign by conservative activists in turn gave Donald Trump an opening to tell the assembled guests at the Al Smith Dinner that Hillary Clinton was sitting there “pretending not to hate Catholics.” This jibe got deserved boos from that very Catholic, very wealthy and generally conservative crowd, and boos are not normal at an Al Smith event, which is a nonpartisan roast to make jokes and raise money for charity.

I think I know why the audience was upset. And may I suggest that a number of faithful, believing Catholics would agree with statements opining that some conservative Catholics distort the church’s teachings by focusing only on those teachings that support the Republican Party while ignoring the rest.

I certainly know one well-known Catholic who would.

Here’s what Pope Francis once said on the topic:

“We cannot insist only on issues related to abortion, gay marriage and the use of contraceptive methods. This is not possible. … The dogmatic and moral teachings of the church are not all equivalent. The church’s pastoral ministry cannot be obsessed with the transmission of a disjointed multitude of doctrines to be imposed insistently.”

So Palmieri, Podesta and Halpin have said nothing anti-Catholic, nothing they need apologize for, and by keeping them on in her campaign, Secretary Clinton is not endorsing anti-Catholicism.

Moreover, when it comes to violating the teachings of the church I would remind all who have maligned these folks as anti-Catholic — without knowing anything more about them than what they read in these stolen private emails — what in fact our church says in its Code of Canon Law:

“No one is permitted to harm illegitimately the good reputation which a person possesses nor to injure the right of any person to protect his or her own privacy.” (Canon 220)

The church has a lot of laws that have formed the structure of an organization that has endured over two millennia.

While Catholics can certainly debate how church teachings apply to political decisions, many canons, such as the one cited above, represent spiritual imperatives as well. There are several beliefs central to our faith that are relevant here: We are all sinners; we should all be seeking salvation through our Lord, Jesus Christ; we should love one another as Jesus has loved us; and, we should practice our faith in community.

Canon 220 embodies all of this and gives us some space to embrace our own unique, personal journey of faith to grow closer to God. We should be encouraging one another on our journeys, not evaluating one another. That verdict will be left to God.

So you can decide who has gone against what the church teaches, and who is the real “anti-Catholic” — the emailers or those who are trying to destroy their good names for partisan political purposes.

And if you choose to make this judgment, to be fair, you must remember that Donald Trump said, in 2013, that Pope Benedict XVI should “give up and die” rather than resign, and that this year he called Pope Francis “disgraceful” because the pontiff said that people who seek to build walls were not Christians.

Also recall that Steve Bannon, the former Breitbart executive who is running Trump’s presidential campaign, is on record saying that “Catholics want as many Hispanics in this country as possible, because their church is dying. ”

So if you are inclined to ignore Canon 220, and choose to judge Podesta, Palmieri and Halpin, and by implication, Secretary Clinton, as “anti-Catholic,” on a distorted reading of their alleged emails, you then might want to put Trump and Bannon’s well-publicized statements into your calculus to create some perspective, and certainly before you vote on this basis.

That approach of course descends into “you too-ism,” the so-called “tu quoque fallacy” by which criticism is answered by pointing out the hypocrisy of others.

That, unfortunately, is how our politics too often functions. Which is why appealing to the church’s laws and traditions could actually elevate this discussion — allowing us to focus on the content of the issues at hand rather than on ad hominem attacks that are only a source of scandalous division.

(Nicholas P. Cafardi is a canon lawyer, dean emeritus of Duquesne University Law School, a member of the board of Catholic Democrats and editor of the book, “Voting and Holiness: Catholic Perspectives on Political Participation”)